WPVI
By Trish Hartman
DEPTFORD TWP., New Jersey (WPVI) -- Vaccination sites in Pennsylvania and New Jersey are not only rescheduling appointments missed because of recent winter weather, but also anticipating a shortage of doses due to delayed shipments.

John Testa of Brick Township, New Jersey received his second shot Friday at the Gloucester County mega-site at Rowan College of South Jersey. His appointment was delayed by one day because of weather.

While county officials say anyone who missed a Thursday appointment will be accommodated through the weekend, they're also looking ahead to next week and the impact of delayed shipments.

"We did not get our normal Tuesday first dose shipment nor did we get our normal Thursday second dose shipment. We're hoping to get it by tomorrow or Sunday or Monday," said Gloucester County Administrator Chad Bruner. He says if they don't get their delayed shipments by Monday they may have to reschedule some appointments.

Winter weather across the country has impacted vaccine shipments this week.

"Because planes and major hubs for both FedEx and UPS have been grounded due to the weather, this week's delivery has not made it to us on time," said New Jersey Gov. Phil Murphy during Friday's state COVID-19 briefing.

Because of this issue, Burlington County's mega-site at the Moorestown Mall is prioritizing second dose appointments and rescheduling first dose appointments as they wait for a missed shipment, according to Virtua Health officials. They say normal operations at the site will resume as soon as the shipment arrives.

Pennsylvania is also affected. State health officials warned Friday morning that shipping delays could cause appointments to be pushed back.

It's not the news people want to hear, especially those who can't even get an appointment.

"We're trying to get our vaccines. I've been online for hours and hours for weeks and weeks," said Joanne Thalman from Williamstown. She came to the Gloucester County mega-site as a walk-in hoping there would be extra doses leftover, but she had no luck on Friday.

State officials in Pennsylvania and New Jersey are assuring people that any canceled appointments due to supply issues or weather will be rescheduled as soon as possible.
Report a correction or typo
Related topics:
societynew jerseypennsylvaniawinter stormcoronaviruscovid 19 vaccinecommunity
Copyright © 2021 WPVI-TV. All Rights Reserved.
COVID-19 VACCINE 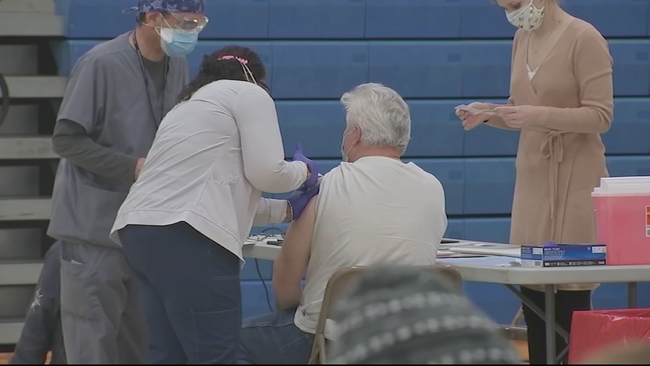