In his directorial debut, Ahmir 'Questlove' Thompson took home the Oscar for Documentary Feature for "Summer of Soul."
WPVI
By 6abc Digital Staff 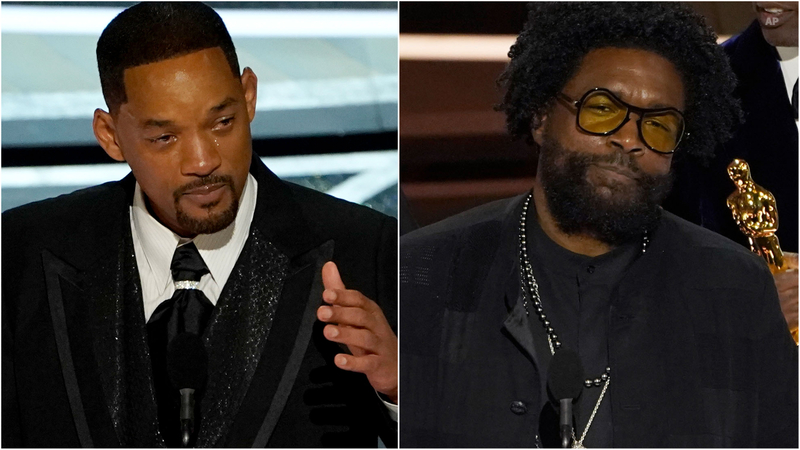 In his directorial debut, Ahmir 'Questlove' Thompson took home the Oscar for Documentary Feature for "Summer of Soul."

The Oscar for Documentary Feature goes to "Summer of Soul (...Or, When the Revolution Could Not Be Televised)"https://t.co/RKwi7HEgmm #Oscars pic.twitter.com/7Bz68QxyAc

Playing historian, the founding member of The Roots and native of the City of Brotherly Love dusted off 47 reels of unseen footage from the 1969 Harlem Cultural Festival, a star-studded event that was never televised.

"I wanted to restore history, do a really good job, and hopefully, maybe a college or two would show it," Questlove told Action News before the 94th Academy Awards.

Questlove got emotional after receiving his Oscar Sunday night.

"It's not lost on me that the story of the Harlem Cultural Festival should have been something that my beautiful mother and my dad should have taken me to when I was five years old. And I'm just -- this is such a stunning moment for me right now," he said through tears.

Will Smith, who grew up in the same Philadelphia neighborhood as Questlove, also took home Oscar gold for Actor in a Leading Role in "King Richard."

Will Smith wins the Oscar for Actor in a Leading Role for his role in #KingRichard. https://t.co/kQSWHRaEEm #Oscars pic.twitter.com/ejOmGEdbMS

"King Richard" tells the story of Richard Williams, the father of Venus and Serena, who helped to shape them into two of the most successful tennis stars in the history of the sport.

Smith - not long before he won best actor - marched on stage and appeared to smack comedian Chris Rock during Sunday night's Academy Awards after the comic made a joke about the appearance of Smith's wife, Jada Pinkett Smith.

Smith shouted at Rock to "keep my wife's name out of your (expletive) mouth," and the crowd hushed as it became clear this was no act. Smith apologized afterward to many people - including Venus and Serena Williams, but did not mention Rock in his apology.

"Richard Williams was a fierce defender of his family," Smith said as he began his acceptance speech.

He then paused, the meaning behind his choice of words clear, and teared up as he spoke about being a protector for those who worked with him on the film such as Aunjanue Ellis along with Saniyya Sidney and Demi Singleton, the two actors who played Venus and Serena.

Philadelphia's Jill Scott made an appearance during the In Memoriam tribute.

Trenton, New Jersey's Adam Blackstone had a huge role as music director for the Academy Awards.

And Bryon Howard of Lansdowne, who is an animator, took home the Oscar for Encanto after winning Best Animated Feature.