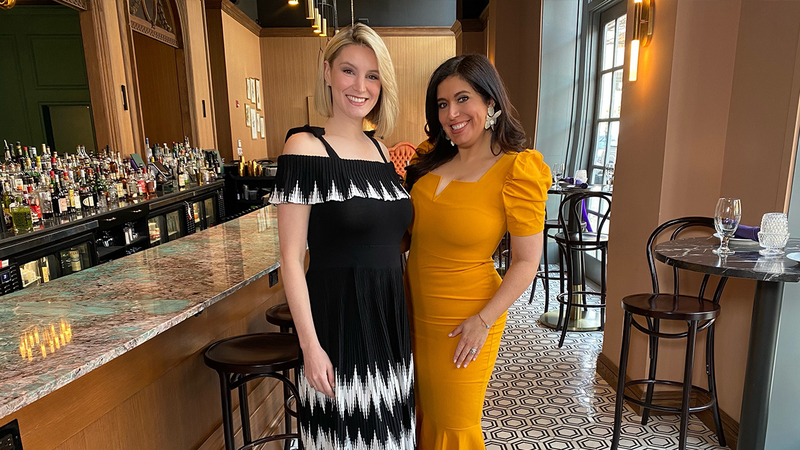 Executive Chef Aaron Paik is the man behind the menu with dishes like the shrimp and grits made Charleston, South Carolina style with andouille sausage and lump crab meat.
You'll also find fried green tomatoes on a bed of pimento spread and crawfish potpie, with the shellfish smothered in cheesy peppers and onions and baked in a house made puff pastry.

Chef Paik grew up watching his grandmother cook, and just like grandma's, this is stick to your ribs comfort food.

In renovating the Royal, owner Jill Weber kept the blue and green color scheme and the vibe of the old theater. There are cushy booths, a long bar and live music on Tuesday nights.

The Royal Theater was built in 1919 and quickly became a gathering spot for the community.

By the 1930s, it was considered "America's Finest Colored Photoplayhouse"

For Weber, history is important.

The restaurant owner is also an archaeologist who spent the past 30 years working mostly in the Middle East, digging up animal bones from around 2600 BC.
She opened her first restaurant, Jet Wine Bar, in 2010 because no place in Philadelphia served the wines she'd come to love in Syria and Iraq. Jet Wine Bar specializes in Ancient World wines.

And from Jet, she had a clear view of the once grand, but by then dilapidated Royal theater.
In creating Rex at The Royal, Jill is on a mission to restore both the physical structure and the Royal's prominent place in the community.

Alsaadi is also a Syrian immigrant who's using the flavors of his homeland to help others coming to this country.
With every order of the wrap Malik al-Batata, dubbed "The Syrian," proceeds go to the Nationalities Services Center to aid Afghan refugees.

Homemade by Bruno hosting pasta making parties in South Philly
At Homemade by Bruno, pasta chef Janine Bruno is preserving the tastes of old-world Italy, combining her family's recipes with her own kitchen creations.

She turned to her past when her present world was turned upside down.
In late 2016, at the age of 30, Bruno was diagnosed with breast cancer.

At the same time, she was laid off from the job she loved and her boyfriend broke up with her, creating a trifecta of loss not long after she'd lost her beloved grandmother.

As she recovered from her physical and emotional wounds, Bruno found comfort and joy in making homemade pasta.

As she learned from family members, Bruno decided she wanted to share that learning process with others, and Homemade by Bruno was born.

Guests are welcomed to her pasta-making classes with an antipasto plate and a glass of wine.

Students pick their shapes along with two sauces.

During the pandemic, when Bruno couldn't teach pasta classes in person, she decided to step out of her comfort zone and learned how to make gelato too.

She competed in Gelato Festival America for the Gelato World Masters, considered the Olympics of gelato.

She placed in the top three in the United States and top five in North America with her Italian rainbow cookie flavor.

Along with the parties, Bruno also plans to hold popups, selling her homemade gelatos, pasta and sauces out of her new South Philly shop.

The cocktail and menu items are the result of a partnership, launched during women's history month, between Patchwork and Alexa Dombkoski, the founder of Bellecento, an extra virgin olive oil from olives grown and pressed in Tuscany then bottled and brought to the United States.

Alexa grew up in Glenside, did a study abroad in Italy during college, fell in love with the food culture and didn't want to leave.

So she finished her degree and moved to Florence, working in food tourism.

It was, she jokes, a tough life, taking people around Tuscany, drinking wine with them all day and eating pasta.
But her career screeched to a halt in early 2020 and Italy went into full COVID lockdown.

So she decided to start her own company, bringing one of her favorite Italian flavors back to her hometown.

She works with a single-family estate located just outside Florence, in an area known for its olive oil.

This is her first harvest season, but Alexa has big plans to grow Bellecento into a whole line of sleekly designed Italian products.

The name, Bellecento, is a tribute to the beautiful Italian life, using the feminine plural to honor the Italian women that Alexa says have been the ones to pass the culture down through the generations. 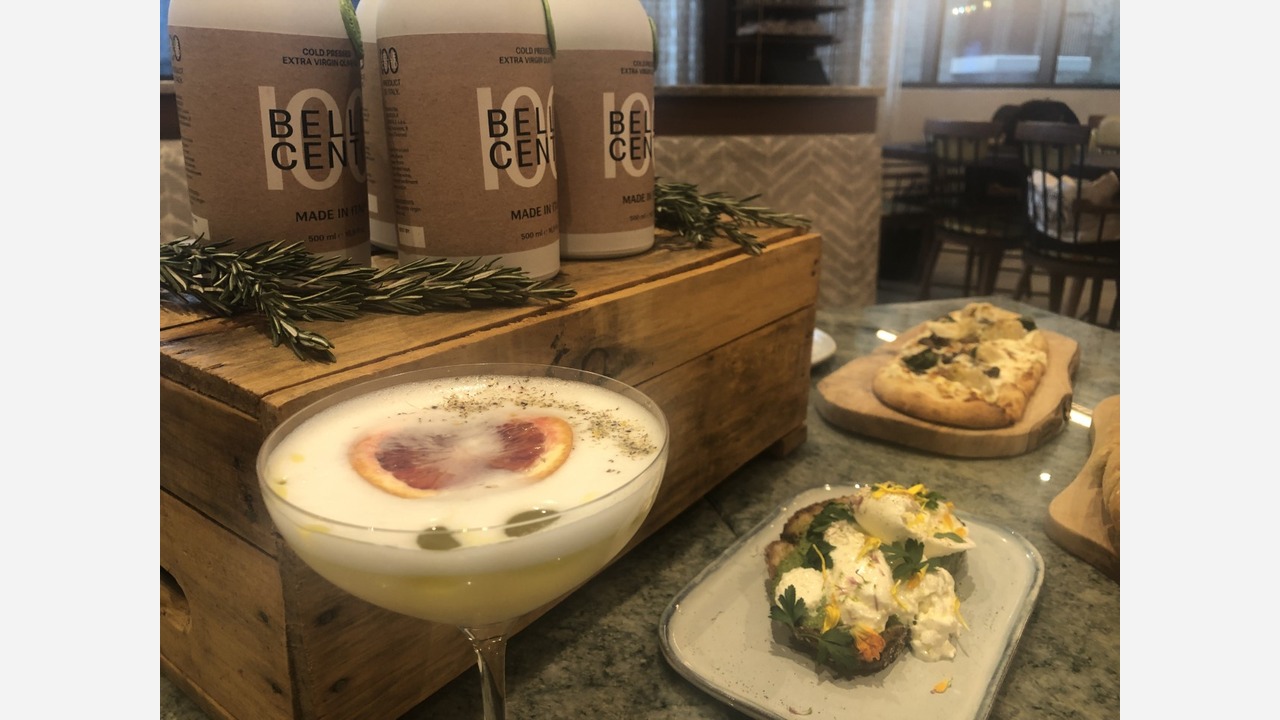 Philly mom helping heal with Made With Love Juicery
Latoya Brown says that everything she does is from the heart and made with love, which led to her business name: Made with Love Juicery.

She offers everything from cold-pressed juices to wellness shots and smoothies and was named Best of Philly in 2021 by Philadelphia Magazine.
Brown, a wife and mother of three and started juicing to lose the 100 pounds shed gained during pregnancy.

She says juicing not only helped her to lose the weight, but also boosted her immunity,

She says she also juiced her mom to good health, enabling her mom to get off medications for high blood pressure and high cholesterol.

Brown also believes juicing played a role in her mom beating Stage 3 colon cancer.
Brown, who went to culinary school and studied pharmacology, started the business out of her home. Then, last spring, she found the perfect retail spot in Spring Garden.

Dinner features global fare from a French-cut chicken entree to tuna tartare, and food can be ordered from a late-night menu as well.
When it's time to turn the scene over for the wee hours, tables can be lowered for craft cocktail service.

On weekends, a DJ spins music, and lighting effects throughout the open space set the tone for a laid-back yet chic night out. 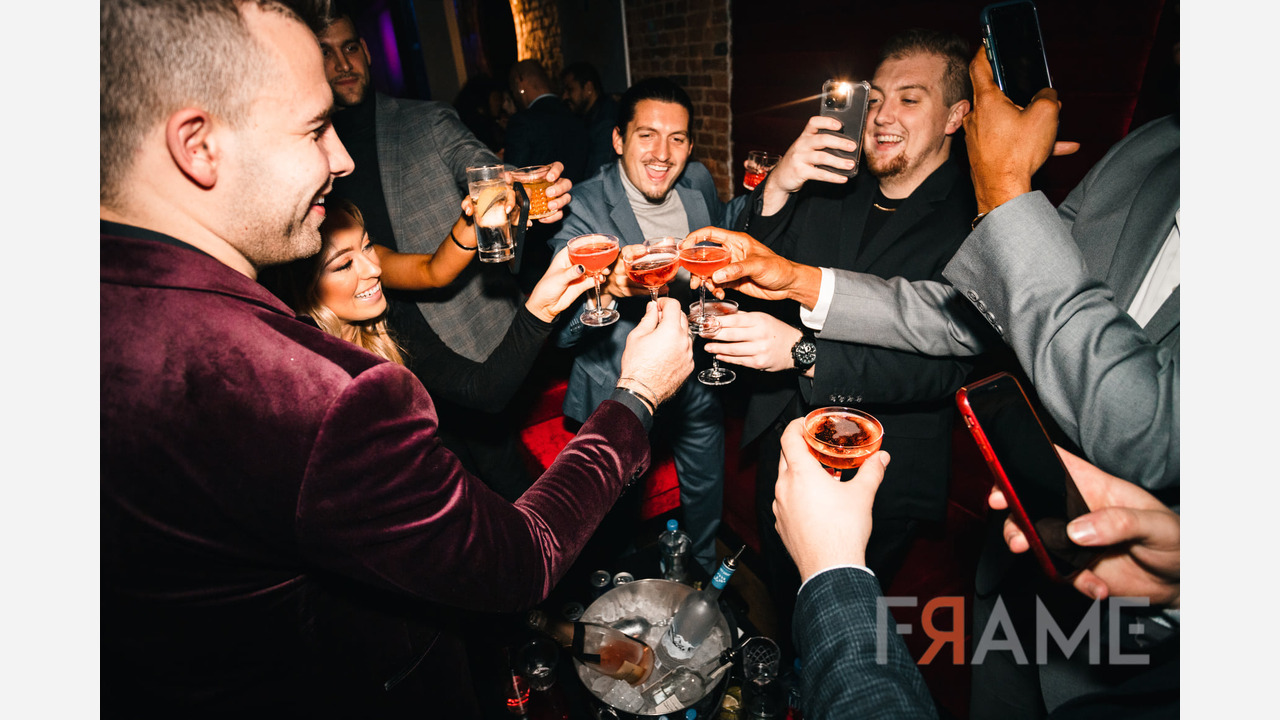 The Mediterranean-focused menu has seafood dishes, as well as a 12-ounce pork chop that is turning out to be a customer favorite.
Music is curated by the owner himself, and he encourages chatting with other dinner guests or getting up and dancing in the cozy space.
Frame | Instagram
222 Market Street, Philadelphia, PA 19106
267-319-1683

More than 85 events are on tap for this year's Philly Theatre Week.
"A 10-day celebration of theater in our region. There are performances, readings, workshops, industry events" says LaNeshe Miller-White, Executive Director of Theatre Philadelphia.

With a kick-off event on the rooftop of the Kimmel Center on March 30th.

For Miller-White, it will also be her first in-person event since coming on board in 2020.

She also runs Theatre in the X, and says theater didn't miss a beat.

Philly Theatre Week runs April 1st through the 10th at a variety of venues.

You can walk the Red Carpet, enjoy cocktails, light bites, and watch the awards ceremony on the big screen.

The event starts at 6:30 on Oscar Sunday with all proceeds benefitting the Film Society.

Waitress The Musical opens this week at the Academy of Music.

It tells the story of Jenna, a waitress who pours her heart into making pies in the hopes that it will be her ticket out of her small town and rocky marriage.

Waitress was the first musical in Broadway history to have an all-female creative team, with music and lyrics by Sara Bareilles. And Jisel Soleil Ayon is breaking barriers with the show on the road. She is the first woman of color to play Jenna in a touring cast.