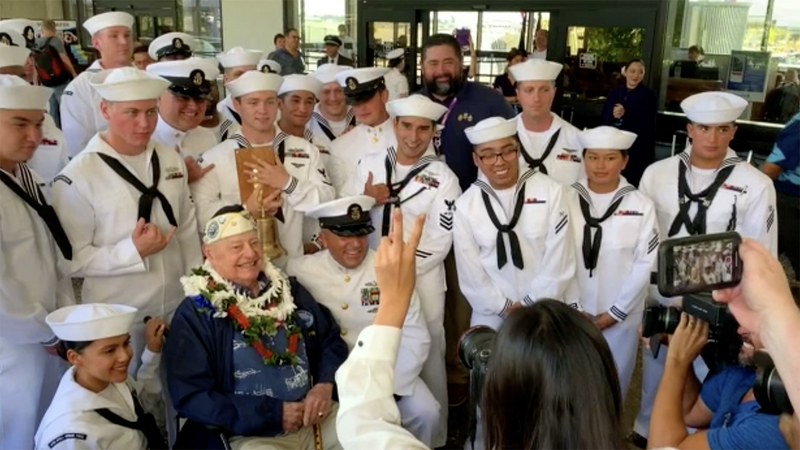 PEARL HARBOR, Hawaii -- December 7, 2019 marks 78 years after the Japanese launched a sneak attack on Pearl Harbor in Hawaii and three days after a gunman opened fire at the naval base, killing two civilians and then himself.

Despite the fresh tragedy, the National Park Service and Navy are hosting a memorial ceremony, and one of the surviving members of the 1941 attack is attending.

Lou Contor arrived in Hawaii with a hero's welcome: A wall of sailors saluted the 98-year-old veteran moments after he deboarded his plane.

Contor was only one of three survivors from the USS Arizona able to travel and attend the 2019 ceremony.

"They're getting better every year," he said when asked to describe his emotions. "First years were real hard."

On December 7, 1941, Conter was serving as a quartermaster third class on the Arizona when the Japanese attacked.

The next day the U.S. declared war against Japan. When asking Congress for a Declaration of War, President Franklin D. Roosevelt famously called the attack "a date which will live in infamy."

"You never forget the day, but things are happening so fast. And we're highly trained in those days to do what our job is to do, and that's what we did," Contor said.

For nearly 30 years, he has returned to pay his respects. This year, the remains of this late comrade Lauren Bruner will be returned to the ship.

"He got out the same as I did. Got home, got married had children, had grandchildren," Contor said.

His family hopes they can keep this annual tradition.