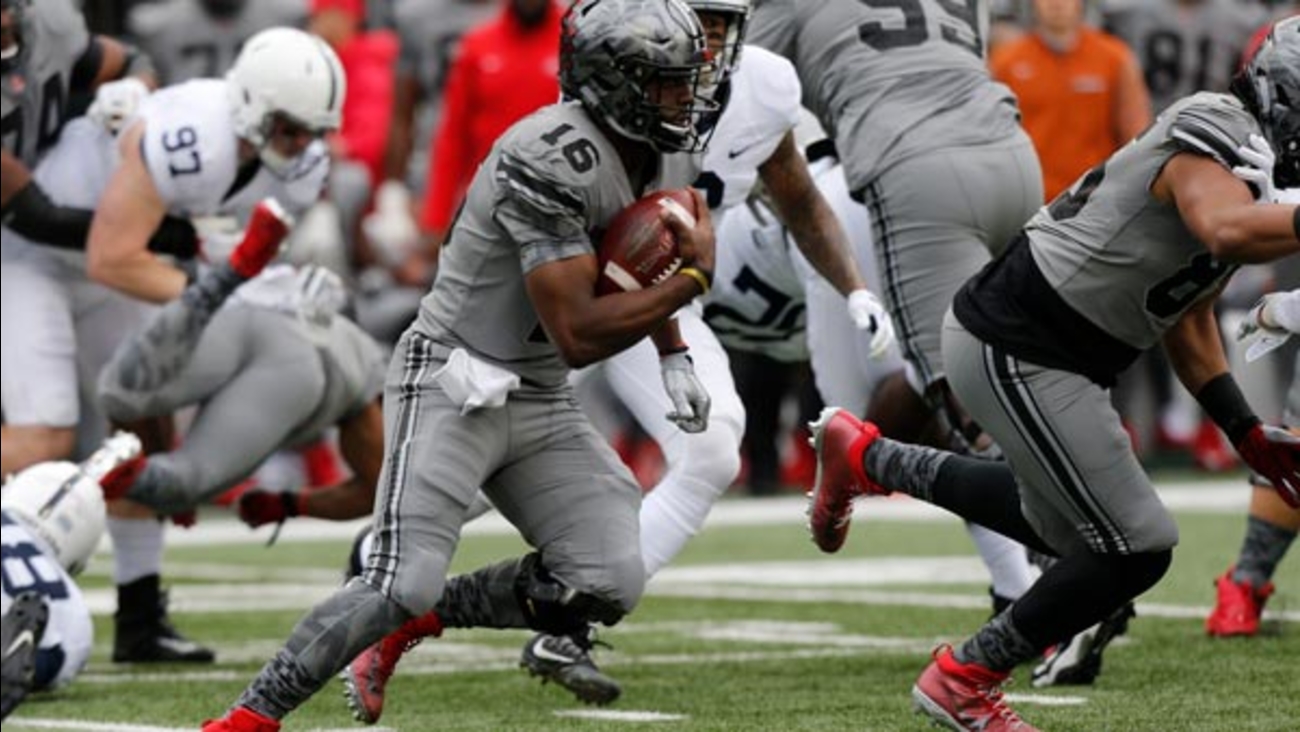 COLUMBUS, Ohio (WPVI) -- Ohio State coach Urban Meyer called it the best he has ever seen a quarterback play.

J.T. Barrett capped the greatest game of his decorated career with a 16-yard touchdown pass to Marcus Baugh with 1:48 left in the fourth quarter and No. 6 Ohio State rallied from 11 down in the final five minutes to hand No. 2 Penn State its first loss, 39-38 on Saturday.

"I've never had a kid play perfect, but damn he was close tonight," Meyer said.

Penn State led 38-27 with 5:42 left and it looked as if the Nittany Lions (7-1, 4-1) were going to knock the Buckeyes out of the College Football Playoff race and put a firm grip on the Big Ten East. Saquon Barkley scored two long touchdowns for Penn State, but it was Barrett who surged into the Heisman Trophy race in what was billed as the Big Ten game of the year and lived up to the hype.

"I think the H-word is appropriate after today's game," Meyer said.

Barrett hooked up with Johnnie Dixon for two touchdowns in the fourth and then got the ball back down five with 3:20 left. The Buckeyes quickly marched down the field and then Barrett found his big tight end Baugh open for the lead.

The blackout crowd at the Horseshoe poured onto the field to celebrate with the Buckeyes after Barrett took a final knee. He calmly wandered through the mayhem, receiving pats on the back. The fifth-year senior, who some fans wanted bench after the Buckeyes' offense struggled in a September loss to Oklahoma, had just delivered a performance to quiet any remaining doubters.

Penn State: The Nittany Lions were in big trouble as soon as they had to drop back and pass and try to block Ohio State's talented defensive line, with Nick Bosa and Tyquan Lewis. Penn State got the ball back with 1:45 left at its own 41 and Ohio State was all over quarterback Trace McSorley. He threw three incomplete passes and was sacked as the Nittany Lions turned the ball over on downs.

Ohio State: The Buckeyes' now control the Big Ten East. Their path to the playoff might still be muddled by that loss to Oklahoma, but right now they are the Big Ten's best shot.

Penn State: The Nittany Lions face a third straight ranked opponent when they go to No. 16 Michigan State.

Ohio State: The Buckeyes go to Iowa next week.