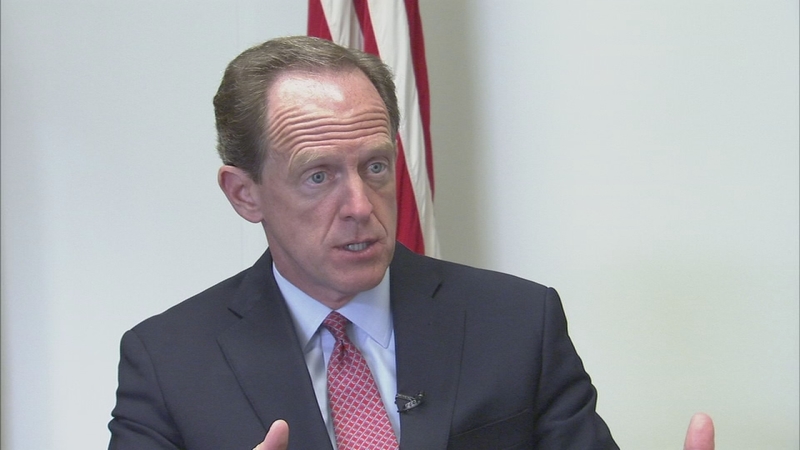 Pennsylvania's junior U.S. senator gives Trump high marks on foreign policy, but admits there have been some stumbles.

"I think it would be better if he did a little less tweeting and keeps the focus on the big, important policies," Toomey told Action News Monday.

Toomey wants to see less knee-jerk reactions from the President and more focus on core issues.

Toomey gives thumbs up on new Supreme Court Justice Neil Gorsuch, but he wants to see more work on the budget.

Will Trump stage a showdown over funding a wall with Mexico that leads to a government shutdown?

"There are regular, almost daily conversations with the goal of trying to get the House, Senate and the White House on the same page," Toomey said.

A new healthcare plan is nearly ready, but not likely to come this week.

"Part of what's making this difficult is trying to do much of the replacement all at once," Toomey said.

Toomey gives Trump an A+ on foreign policy. He agrees with the strike and sanctions against Syria. Toomey says American troops could be headed there if the U.S. is serious about removing President Assad.

"I don't think it requires a large U.S. invasionary force. Congress should give the President the authorization to use military force to execute that plan," Toomey said.

And he knows progress hasn't come as quickly as voters wanted.

Trump approaches his 100th day in office with the lowest approval rating at this point of any other president in polls since 1945.

"It's tougher for a president to advance his agenda if his approval numbers are not high, that is a fact," Toomey said.

Overall, Toomey says he's cautiously optimistic that President Trump will continue to grow in his office.

Toomey denies that he himself has not been available to his constituency.