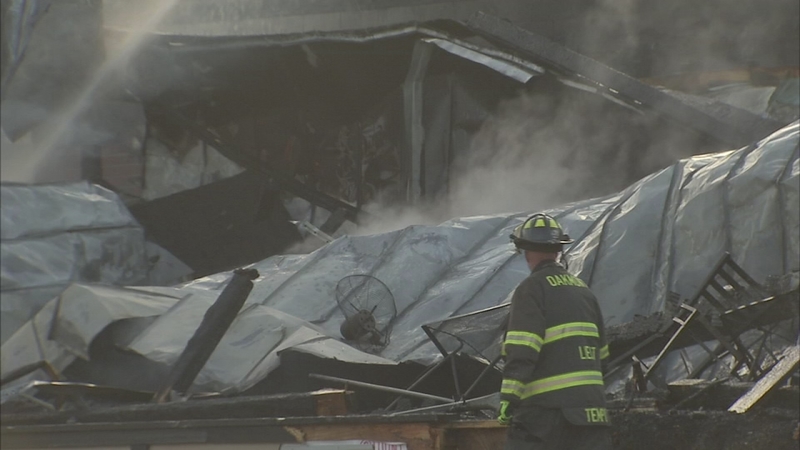 HAVERTOWN, Pa. (WPVI) -- A weekend fire that ripped through a popular Delaware County restaurant and pub has been ruled accidental.

The Havertown fire police chief said on Monday the blaze at Barnaby's of America may have been sparked by a cigarette.

The two-alarm fire began around 5:30 a.m. Sunday at the restaurant on the 1900 block of Old West Chester Pike.

Crews were able to eventually get an upper hand on the blaze, but not before it heavily damaged the restaurant.

Chopper 6 over fire at Barnaby's in Havertown.

"Extremely heartbreaking. Barnaby's Havertown is like a person to me. It's family. Everyone that works here is family," owner Bill Daley said.

From employees to patrons, it is clear that Barnaby's is beloved place in the town.
"I started crying before I even pulled in. I've worked here for 13 years and it's like a second home," employee Nicole Rudolph said.

Havertown resident Joe Kane has a son who works at Barnaby's.

"It's a neighborhood institution. It's a shame," Kane said.

With flames so intense and so widespread, there wasn't much crews could do. Everyone we spoke with just wants their favorite spot back.

"It's a popular place and I hope it gets rebuilt soon, and they're able to get it going, because it's a big hangout for a lot of people," Diane Reiner of Upper Darby said.

Daley says his employees and loyal patrons do not have to worry because Barnaby's is, in fact, coming back.

No one was inside the restaurant when the fire started.

As for reopening, management says they're shooting for the July 4th weekend.

Restaurant fire in Havertown. Gray Hall reports during Action News at 6 a.m. on May 7, 2017.