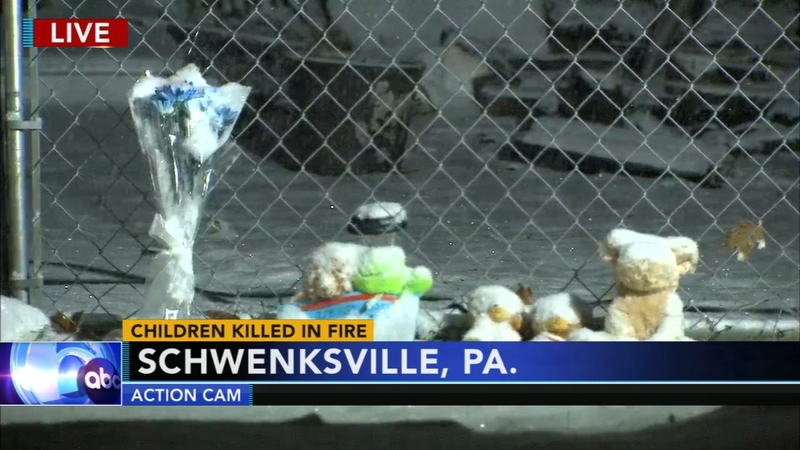 SCHWENKSVILLE, Pa. (WPVI) -- Two sons of a Montgomery County sheriff's deputy were killed in a house fire on Wednesday morning.

The fire erupted around 5:30 a.m. at a home in the 900 block of Summit Avenue in Schwenksville, Pa.

Authorities say 11-year-old Bryan Lukens Jr. and 6-year-old Parker Lukens were found dead inside the home once the flames were extinguished.

Dep. Bryan Lukens was being treated at the burn unit at Lehigh Valley Hospital. His wife, Tracy, and 9-year-old daughter Soffia were treated for their injuries Pottstown Hospital and released, the sheriff's department said.

"Our office is devastated to learn about this tragedy," said Montgomery County Sheriff Sean P. Kilkenny said in a statement. "Our thoughts and prayers are with the Lukens family as they grieve their losses."

The blaze was placed under control shortly after fire crews arrived, police say.

Fire marshals are working to determine a cause of the fire.

By Wednesday night, crews were boarding up a home that was once filled with an active family.

"Very energetic, always doing something, always at the basketballs courts and everything, boys were always out playing," said neighbor Lisa Dull.

Those who know the family are stunned by this tragedy.

"I can't imagine losing one child, let alone two and knowing you did everything you could to save them," said family friend Kyle Boelter. "I don't know how they move on. We as a community have to rally around them."

Bryan Jr. and Parker were students at Schwenksville Elementary School. In a statement, the Perkiomen Valley School District said support for students and their families will be ongoing as needed. The district has said counselors will be on hand at the school Thursday.

"We invite all to join us in sending their thoughts and sympathies to the family at this very difficult time," the district said in a statement.

A makeshift memorial began to grow Wednesday night outside of a security fence placed around the property.

"I just can't believe it," said family friend Mary McGill. "It's worse than I thought."

Officials have not released any word as to the cause of the fire; the investigation is ongoing.