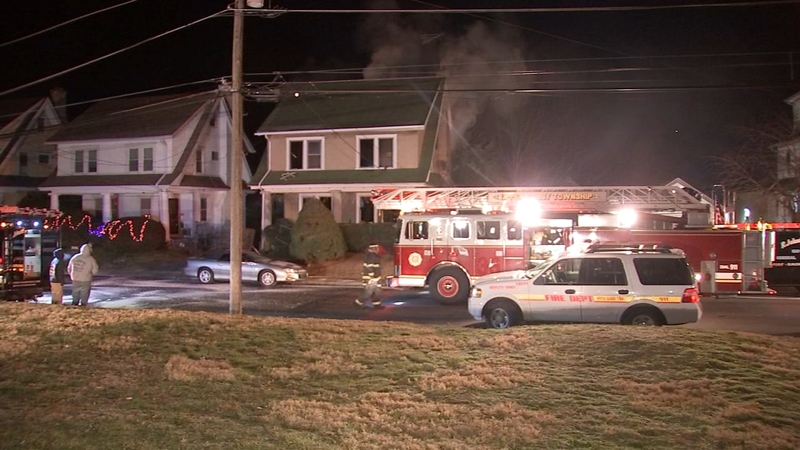 UPPER DARBY, Pa. (WPVI) -- Some jumped out of windows and others were remained trapped inside a burning home in Upper Darby, Delaware County early Wednesday morning.

Neighbor Tracey Brown woke up to the sound of screaming and breaking glass around 12:30 a.m. Wednesday, but she explains, at first, she didn't know if she was dreaming.

She looked out her window and saw the commotion at her longtime neighbors' home.

"I come flying downstairs. I see the brother and the sister running back and forth, and the girlfriend was hanging from the attic window. They were telling her to jump and, at the same time, also trying to call for their mother," Brown said.

In the house when the fire started, was a mother, her three adult children, and one of their girlfriends. The father was at work at the time.

Brown called 911, then tried the front door, but there was too much smoke to go inside. Meanwhile, she heard the girlfriend jump from that attic window.

"I didn't see it, but I heard her hit my car then hit the ground. Came back over and told her don't move, just lay there," Brown said.

Police were first to arrive at the terrifying scene on North Carol Boulevard. Firefighters were there soon after and they set up ladders to rescue the people trapped inside.

Upper Darby Mayor Tom Micozzie said, "There's some numerous heroic efforts here between the police and fire initially within the first minutes of the fire for the rescue."

All five adults were taken to area hospitals with serious injuries.

"When I came back out, they were dragging the son through the window and the mother came out through the front door," neighbor Fitzgerald Brown said.

The fire appears to have started in the first floor, but the cause remains under investigation.