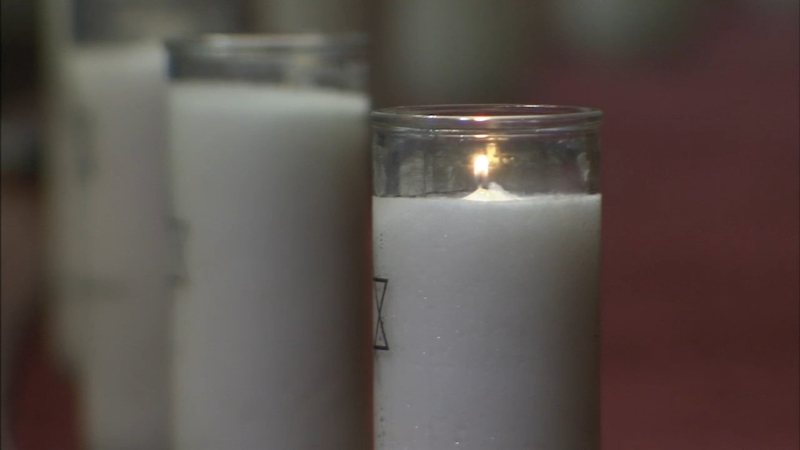 LOWER MERION TWP., Pa. (WPVI) -- Congregation Or Ami in Lafayette Hill, Montgomery County was one of many synagogues that held vigils Sunday to mourn, pray and stand in solidarity with the families affected by the shooting at the Tree of Life Synagogue in Pittsburgh.

Congregants also filled the seats in Har Zion Temple in Penn Valley and filled the space with song.

"When you don't have words to say, and words aren't going to be enough, what do you do when you come together? And how do you find action items to really help out those who are suffering when it's too early to really know what the needs are going to be?" asked Rabbi Seth Haaz of Har Zion Temple.

For many congregants the need was togetherness and prayer after 11 people were killed outside Pittsburgh Saturday morning.

"We as Jews and Americans, we must come together and realize that this is something that is really tragic that took place," said Evette Mittin of Lower Merion Township.

Congregants told Action News they are not afraid to come and pray together, to mourn those who were killed.

The services were packed Sunday night with several faiths represented, trying to make sense of what happened.

"I think it makes me more determined to make sure that we come and not let what happened yesterday deter us from coming to a house of worship and be a community," said Larry Paul of Lafayette Hill. .

Elected officials offered words of support and local first responders were welcomed onto the bima for the closing song and prayer.

Organizers say they worked quickly to give their congregants a place to grieve together.

"My goal and hope was to move forward and to bring together a community of love and strength and togetherness," said Rabbi Glenn Ettmann of Congregation Or Ami.

People said this gave them the chance to mourn those lost and help move forward.

"Only a community can do that, to introduce the norms that I think we used to live by where hatred is not acceptable," said Brotman.

Both vigils had police presence and increased security, but emphasized their desire to keep their doors open to everyone despite what has happened.