Having 'done this before,' Phil Martelli, 67, relaxed, ready to coach Michigan men's basketball ANN ARBOR, Michigan -- In a hallway in the guts of Crisler Center, an anxious Michigan athletics employee walked Phil Martelli to the news conference. More than once, she offered to help: Do you need me? Can I do anything?

Martelli, his shoulders relaxed and his demeanor confident, assured her that he was OK. And with that, he strode purposefully into the room and toward the podium.

"I know what I'm doing. I've done this before," he said Tuesday.

A big five game stretch begins for the Wolverines -- with FOUR at home!
We move FORWARD ... TOGETHER!

The 67-year-old Martelli, having spent nearly four decades in big-time college basketball, will fill in for Michigan coach Juwan Howard for the rest of the regular season. Howard was suspended five games and fined $40,000 by the Big Ten Conference after hitting a Wisconsin assistant coach in the head during the handshake line after a loss on Sunday.

Martelli aims to bolster the Wolverines' chances at an NCAA tournament bid after the team started the season with high expectations for March. His first game will be Wednesday night, when Michigan (14-11, 8-7) hosts Rutgers (16-10, 10-6).

Now in his third season as the Michigan associate head coach, following 24 years of guiding Saint Joseph's and 10 more there as an assistant, Martelli is no stranger to leading a team through late-season pressure. He maintained his approach will be to continue on the path created by Howard.

"What we have in place is the way we're going to play," Martelli said. "I don't have the offensive mind that [Howard] has. I don't have that in my DNA."

Assistant coach Howard Eisley will serve as offensive coordinator in Howard's absence, Martelli said. Eisley will call sets from a "really effective and massive" playbook that he and Howard have put together.

And Martelli made this clear: Michigan will continue to participate in postgame handshake lines.

"Do not get rid of them," he said. "This is about more than basketball; it's about teaching young people lessons." 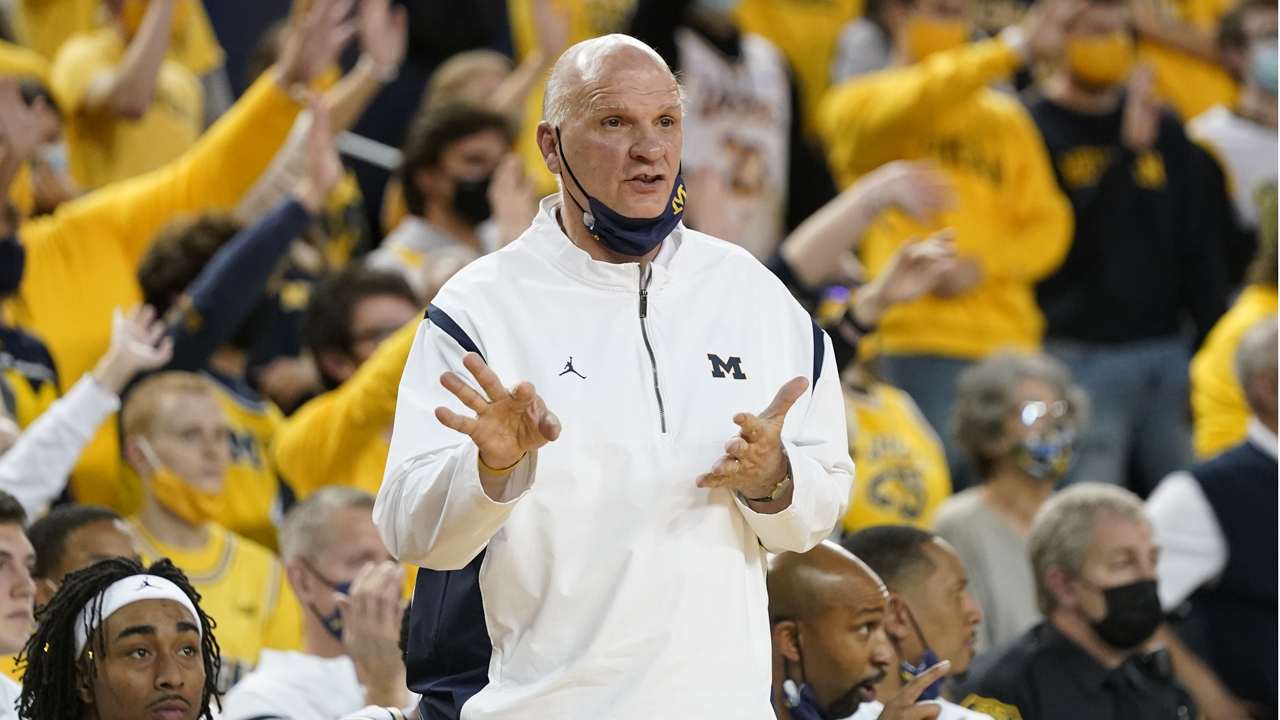 FILE - Michigan associate head coach Phil Martelli signals from the sideline during a game against Buffalo on Nov. 10, 2021, in Ann Arbor, Mich.

Howard, a former Michigan standout and NBA All-Star who is the reigning Associated Press men's coach of the year, became upset after Wisconsin coach Greg Gard called a timeout with 15 seconds left and his team leading by 15.

The confrontation began when Gard grabbed Howard by the arm in an attempt to explain why he called the timeout. Howard yelled and put his right index finger in Gard's face as the two began to argue.

After the two coaches were separated, Howard swung his right hand and struck Wisconsin assistant Joe Krabbenhoft on the left side of the head with an open hand. Players on both sides quickly got involved, and a punch-filled melee ensued.

Howard apologized in a statement on Monday.

Michigan's Moussa Diabate and Terrance Williams II and Wisconsin's Jahcobi Neath were suspended one game each.

Diabate is averaging 5.7 rebounds per game, second best on the Wolverines, and 9.3 points. Williams is a reserve forward playing 15.4 minutes per game. The Wolverines will look to bench players such as Jace Howard and Brandon Johns Jr. to replace that production.

"Brandon Johns is not Moussa," Martelli said. "You can't come up with a game plan and say, 'Moussa averages 8.1; how are we going to get 8.1?' That's not going to work. ... We need the best Brandon Johns in order to beat Rutgers, and it'll be good enough."

Martelli was the 2004 Associated Press men's coach of the year after guiding Saint Joseph's within one win of the Final Four. He was 444-328 as the Hawks' coach, including seven appearances in the NCAA tournament. That 2004 Hawks' season featured players who would graduate to the NBA, including Jameer Nelson and Delonte West.

Martelli will coach the Wolverines in home matchups against Rutgers, No. 15 Illinois on Sunday, Michigan State next Tuesday and No. 25 Iowa on March 3, along with a visit to No. 22 Ohio State on March 6.

Howard is expected to return for the Big Ten tournament, which begins March 9 in Indianapolis.

"I am not Juwan Howard, and I'm going to be me," Martelli said. "A small thing about me is that I never sit down during a game. So there'll be a chair there, but it will be for him. It will not be for me."