Matthew O'Connor adds the demand is increasing, and their fabric supplier is overwhelmed with orders.
WPVI
By Annie McCormick and 6abc Digital Staff 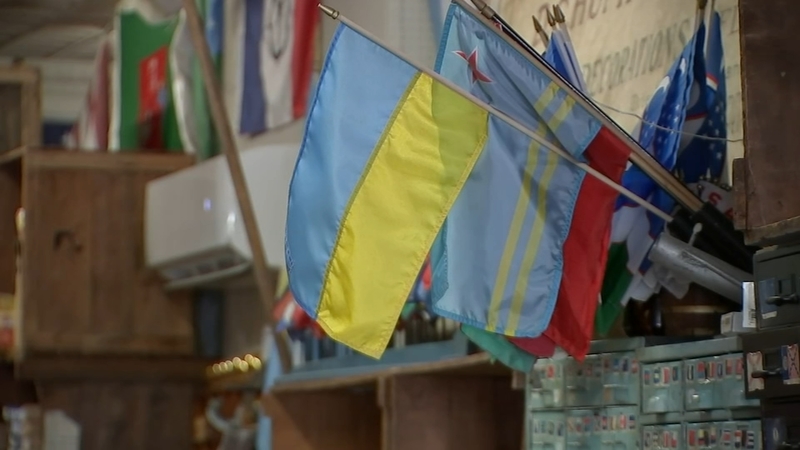 They take walk-in customers and do large orders for customers locally, but they also ship nationwide.

Once Russia signaled their intent to invade Ukraine, O'Connor knew they needed to prepare for an onslaught of Ukrainian flag orders.

He even unfurled a large 10 foot by 15-foot flag to drape on the front of their building by 3rd and Arch streets to show support for the embattled country.

"There was a caravan of cars waving Ukrainian flags. As soon as I got back, I called my dad and said, 'I was stuck in traffic, and everyone had Ukrainian flags; we need to ramp up production,'" said O'Connor.

"We make two different kinds of Ukrainian flags. We make the regular two-color Ukrainian flag which is easy to make. You just put the two stripes together," he said.

He also makes the blue and yellow flag with the Ukrainian coat of arms.

"The trident was always the flag I wanted to make, but people didn't ask for it, then suddenly people were starting to ask for it here," said O'Connor.

O'Connor adds the demand is increasing, and their fabric supplier is overwhelmed with orders.

"We're doing our best to stay on top of it. Obviously, there's a regular workload we have to make flags for. I know we've filled all the orders we have so far, and well, I'm hopeful the conflict is going to wind down," said O'Connor.

Still, he said they are happy to fill as many orders as possible.

The majority of the orders are from individuals and businesses who want to show support.