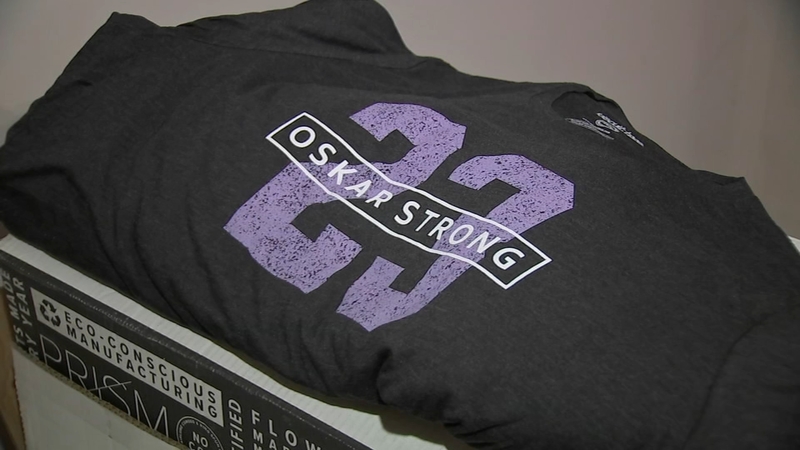 CINNAMINSON, New Jersey (WPVI) -- The love and support for Philadelphia Flyers forward Oskar Lindblom has been overwhelming since he was diagnosed with cancer in December.

Among his biggest supporters is Kim Parent, the daughter of Flyers Hall of Famer, Bernie Parent. She helped come up with "Oskar Strong" t-shirts, initially for Flyers players to wear to support their teammate who is being treated for Ewing Sarcoma, a form of bone cancer.

The idea took off and now anyone and everyone can score a shirt.

Parent now sells them out of her mom's basement in Cinnaminson New Jersey, along with her business partner, Jodi Smith, of Biscuit Tees.

"It makes me tear up. We've had quite a few times breaking down in tears that we can do this to contribute," says Kim Parent the co-owner of Biscuit Tees.

Kim and Jodi have been working around the clock, seven days a week, sometimes till 3 a.m. to fulfill the demand. They take orders out of the basement, packing them up and shipping around the world.

Shirts are popping up everywhere. Even other teams are sporting them, from the Rangers to the Flyers most-hated rivals, Sidney Crosby and the Penguins, wore them to support the Flyer, which even surprised Flyers captain Claude Giroux.

"For one day nobody hated Sidney Crosby in Philadelphia," Jodi Smith co-owner of Biscuit Tees jokes.

Claude Giroux adds, "To see how big this got, is pretty amazing."

This started with a goal to raise $5 to 10,000 for the NHL's program Hockey Fights Cancer.

But it's taken off. In a little more than a month into selling Oskar Strong shirts, they have raised roughly $215,000 for cancer patients.

Smith says, "Just the amount of people you can touch, that's what keeps you going."