PHILADELPHIA (WPVI) -- Philadelphia Marathon Race Weekend will see thousands and thousands of runners come to town, along with many detours, road closures, and safety restrictions. 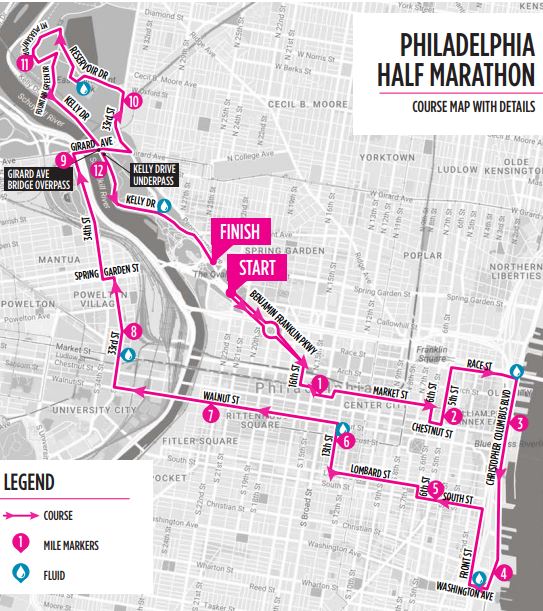 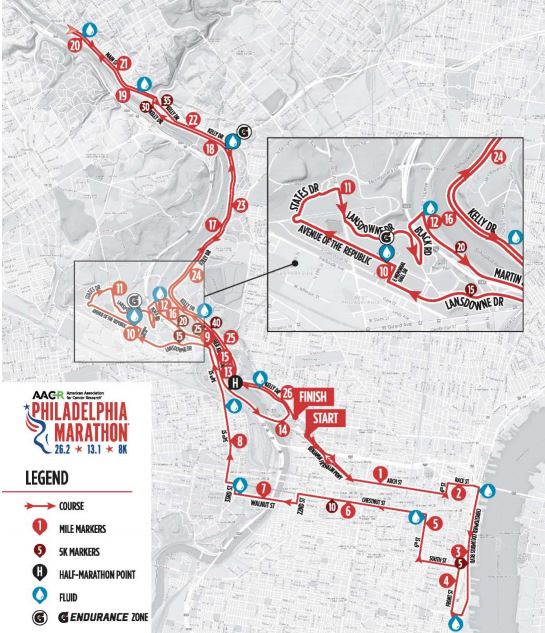 All runners should have bibs visible and fastened on the chest front of your attire.

All bags are subject to inspection.

Only clear plastic participant bags will be accepted at Gear Check.

Runners should arrive with the event-issued gear check tag (top of bib tear-off strip) affixed to their bags.

The start of the race will not be delayed due to lines at security checkpoints.

Weapons and contraband of any kind (regardless of permitting). This will include firearms, knives, pepper spray, etc. NOTE: Right-to-Carry permits will not be honored and weapons will not be permitted into the venue.

Fireworks (includes flammable liquids, fuels or explosives)
Suitcases
Bulky items or packages larger than 12"x12"x6"
Containers (glass, aluminum or otherwise) that can hold more than 1 liter of liquid. (Water bottles are permitted).
Alcohol
Illegal drugs or illicit substances of any kind
Bicycles or scooters (bikes/scooters may be parked outside the venue, in the protected Bike Valet zone on River Field, south side of Eakins Oval
Masks of any kind (except religious headwear)
Small Unmanned Aircraft Systems (sUAS/Drones)
Selfie sticks
Animals or reptiles (dogs and cats are permitted)

LOCATION OF THE START LINE

The start line for both the Philadelphia Marathon and Half Marathon will be on the 2200 block of the Benjamin Franklin Parkway, just east of Eakins Oval.

City officials released information about road closures associated with the AACR Philadelphia Marathon Race Weekend today. Streets will be closed in many parts of the city during the weekend of November 22 - 24. Delays can be expected. Motorists are advised to use alternate routes, avoid areas along the race course, allow for extra driving time, and proceed with caution during Race Weekend. Due to increased security in the Parkway area, parking and traffic regulations will be strictly enforced. Street closures are implemented on a rolling basis and will occur as runners go by. City officials urge motorists to refrain from double-parking, which creates congestion, limits traffic flow, and is illegal.

Areas facing a major impact include:

Friday, November 22
The inner-drive lanes (both directions) of the Benjamin Franklin Parkway will be closed, from 9:30 a.m. until 2:45 p.m., on Friday, November 22. At 2:45 p.m., all lanes will be opened for the afternoon rush hour. Inbound, inner lanes from Binswanger Triangle to 22nd Street will remain closed.

Street closures will be in effect for the AACR Philadelphia Half Marathon, Rothman Institute 8K and Dunkin' Munchkin Run on Saturday, from 2 a.m. until 3 p.m., along the Benjamin Franklin Parkway, between 20th and 25th Streets, and also on Kelly Drive, Martin Luther King Jr. Drive, and numerous other roads in Center City (see complete list below). Prior to Saturday, "No Parking" signs will be posted in the Parkway area, and along the race course. On Saturday, the vicinity near 18th Street and the Parkway, and the Logan Circle area will be closed to vehicular traffic until approximately 11:30 a.m.

The following streets will be affected across the city on Saturday, November 23:


Motorists and pedestrians can expect significant delays when trying to cross roads or streets that are adjacent to the course. Police will allow traffic through intersections along the course, when possible, depending on the flow of the race participants. All streets (with the exception of Eakins Oval) are scheduled to be reopened by 2 p.m. on Saturday, November 23. Eakins Oval will be opened by 5 p.m. The inner drive of the Parkway (inbound), from Binswanger Triangle to 22nd Street will be closed until Sunday afternoon at 5 p.m.

As part of enhance security for the Philadelphia Marathon, City of Philadelphia "No Parking" regulations will be strictly enforced. All vehicles on the race route will be relocated, beginning at 2 a.m. on Sunday. Owners of towed vehicles are encouraged to contact the Philadelphia Parking Authority. In addition, the Parkway (22nd Street to Eakins Oval) will be closed, from 2 a.m. until 5 p.m. Other streets along the race course will reopened as runners pass by and the streets are cleaned.

The following streets will be affected across the city on Sunday, November 24:


Motorists and pedestrians can expect significant delays when trying to cross roads or streets that are adjacent to the course. Police will allow traffic through intersections along the course, when possible, depending on the flow of the race participants. All streets are scheduled to be reopened by 5 p.m. on Sunday, November 24.

Philadelphia's mass transit system (SEPTA) offers two subway lines, regional rail service to and from the surrounding suburbs, and bus service throughout the city. Below is a summary of SEPTA detours (from the SEPTA website) that will be in effect during Marathon Race Weekend. Check the SEPTA website for additional information.

Bus detour information and updates or changes to service will be published on SEPTA's System Status page. Customers can also use TransitView on the SEPTA app. Riders should check System Status regularly or follow @SEPTA and @SEPTA_BUS on Twitter for updates. Detour times are subject to change.

Detours on the Routes listed below are scheduled to begin at 6 a.m. Saturday, November 23 and Sunday, November 24. Select buses will operate on different routing during the Half Marathon and the Marathon. Half Marathon detours are expected to end at approximately 10:30 a.m. Service is subject to change. Customers should refer to System Status regularly for updates to routing throughout the day.
In addition to the routes noted below, Bus Routes 7, 32, 33, 38, 43, and 48 will operate on a temporary detour to allow for the setup of marathon events on Ben Franklin Parkway between Eakins Oval and 20th Street. Routing information will be posted to System Status prior to the event.

Customers can take Regional Rail Trains to Suburban Station or 30th Street Station for access to the start and finish lines. Please note the following service advisories for Saturday, November 23 and Sunday, November 24:

Sign up for free text alerts from the City to get weather, transit, event details, and public safety updates. Text RUNPHL (one word, no space) to 888-777.
Connect with marathon course maps, public safety features, road closures, and more helpful tips by visiting the Office of Emergency Management's story map: www.phila.gov/marathonweekend. Follow @PhilaOEM on Twitter and use #PhillyMarathon.

The cultural institutions along or near the Benjamin Franklin Parkway will experience the greatest impact from the race. They generally will maintain normal weekend hours of operation on Marathon Race Weekend. These institutions include: The Academy of Natural Sciences of Drexel University, Barnes Foundation, Fairmount Water Works, The Franklin Institute, Free Library of Philadelphia - Parkway Central Library, The Galleries at Moore College of Art and Design, Philadelphia Museum of Art and the Perelman Building Annex, Rodin Museum, and Eastern State Penitentiary.

Parking may be available at or near the cultural institutions, but using public transportation is strongly encouraged. The institutions' individual websites should be referenced for information on exhibit hours, ticket-admission, and parking accommodations.