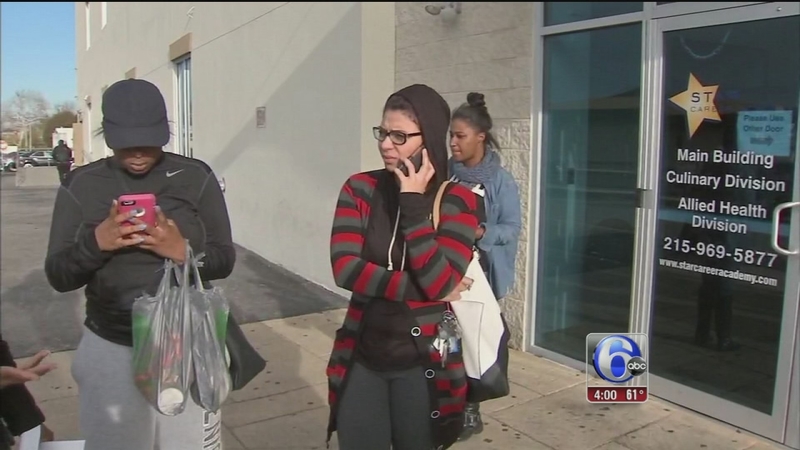 PHILADELPHIA (WPVI) -- Star Career Academy, which has campuses in both Philadelphia and New Jersey, announced its closure on Tuesday.

In a statement, administrators said it would cease operations immediately and all future classes were cancelled.

Tuesday was to be a staff training day, administrators said, so no classes were scheduled.

Students were told not to report to campus.

"Star Career Academy's closing is the result of the negative financial impact of a continued declining student population while operating in the challenging for-profit post-secondary school industry," school officials said in a statement.
Action News was there as stunned students showed up at the campus in Northeast Philadelphia, after learning by text message that the school is closing.

There are among 1,000 students in three states who face uncertain futures.
"Yesterday, we were informed not to come to school because they had a faculty meeting. Today, I woke up to a text message saying, basically, the school was closed. Don't return," said Shannon Whitaker of Lansdale.

Many students were just days away from completing their courses, and some have thousands of dollars in student loans.

"$18,000 and no way to get it back, and poured all this time into getting an education and for what? For nothing now," said Matthew Dixon.
"They were still enrolling students, some of them came here. They had appointments for them," Yasmin Ali of Northeast Philadelphia.

According to published reports, Star Career Academy lost a class action lawsuit for defrauding students back in 2015 and was ordered to pay more than $9 million plus court fees. It's unclear if that ruling impacted the school's bottom line and ability to operate.

The closure impacts all campuses operated by Star Academy, including the Culinary Academy of Long Island and ServFast Computers in Toms River, NJ.