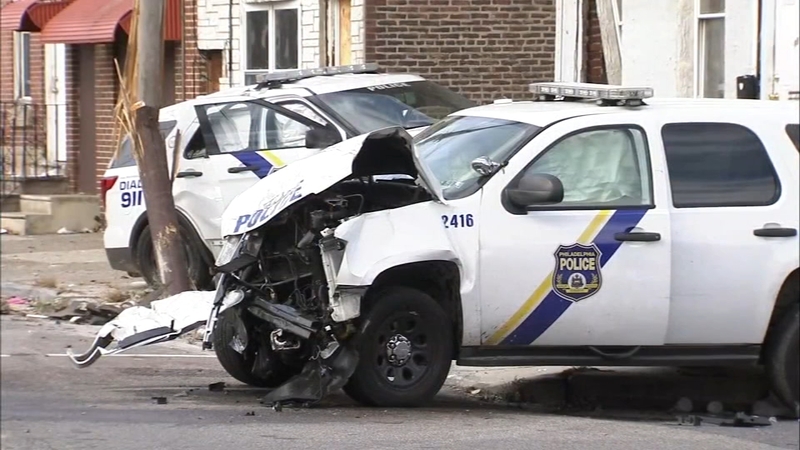 The wreck happened just after 10 a.m. at D Street and Indiana Avenue in the Kensington section.

The Action Cam was on the scene after two police vehicles were involved in a crash in Philadelphia's Kensington section.

The view from Chopper 6 HD showed one police SUV with significant front-end damage.

Another police SUV was up on a sidewalk with damage to its side. That vehicle also apparently struck both a building and a utility pole.

"I see one cop car coming up the 2900 block of D Street and one was coming up Indiana Avenue," said witness John Bayani. "They crashed against each other and it looked like 'Fast and Furious.' Cars kept spinning."

"I saw the officer jump out the cop car his face was all bloody and everything," Bayani continued.

Chopper 6 was over the scene of a crash involving Philadelphia police vehicles on November 10, 2017.

The crash happened as the officers were responding to the scene of a shooting investigation, police say.

In that incident, police say the 20-year-old male suspect was reportedly driving recklessly and got into an argument with another driver.

The suspect then fired a shot at the other driver and took off.

SEPTA police officers in the area heard the shot and began a pursuit. Those SEPTA officers stopped the suspect at Rosehill and Allegheny.

That suspect is now in custody.