Police say the suspect pointed a gun at a KIA dealership salesman and told him to get out of the car.
WPVI
By 6abc Digital Staff and Katherine Scott 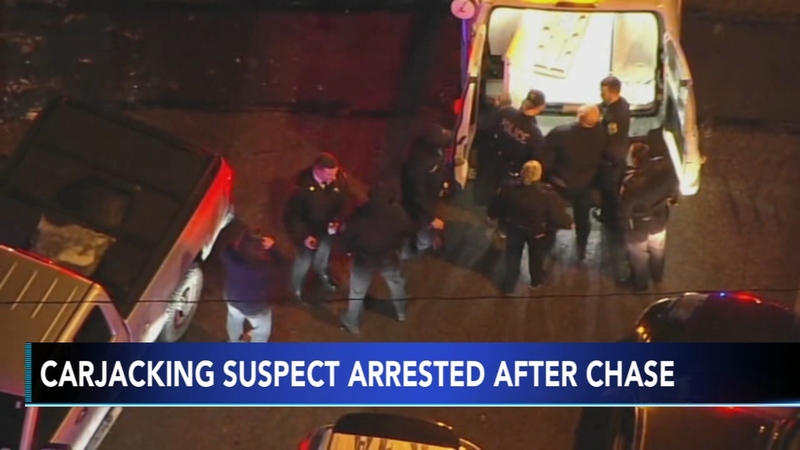 PHILADELPHIA (WPVI) -- A suspect accused of stealing a car last week in New Jersey is now in custody after a carjacking and police chase on Monday night in Philadelphia.

The suspect reportedly went to the dealership and asked to test drive the vehicle.

That's when police say the suspect pointed a gun at the salesman and told him to get out of the car.

Ferraro was able to get away until he was spotted around 8 p.m. Monday in the East Oak Lane section of Philadelphia on Monday night. A police chase ensued.

A suspect accused of stealing a car last week in New Jersey is now in custody after a carjacking and police chase on Monday night.

A police helicopter began tracking the KIA Sorento from the air. They say the driver would not pull over.

Philadelphia police say the suspect rear-ended a Lexus in the area of Crescentville Road and Adams Avenue in Lawncrest. He then pulled the female driver out of the Lexus and then drove away in her vehicle.

When the Lexus was going south on the 5700 block of Tabor Avenue, police say it hit another vehicle which was going north and then crashed into a parked car.

Police say Ferraro got out and started running on Brill Street; officers chased him on foot and were able to apprehend him.

"This appeared to be a very, very dangerous individual because he refused to stop and then not only did he crash into this Lexus, but he pulled the driver out, forcefully threw her to the ground, then took that second vehicle," Philadelphia Police Chief Inspector Scott Small said.

Philadelphia authorities are working with investigators in Cherry Hill in connection with the dealership auto theft.

It's still unclear what charges Ferraro will be facing.