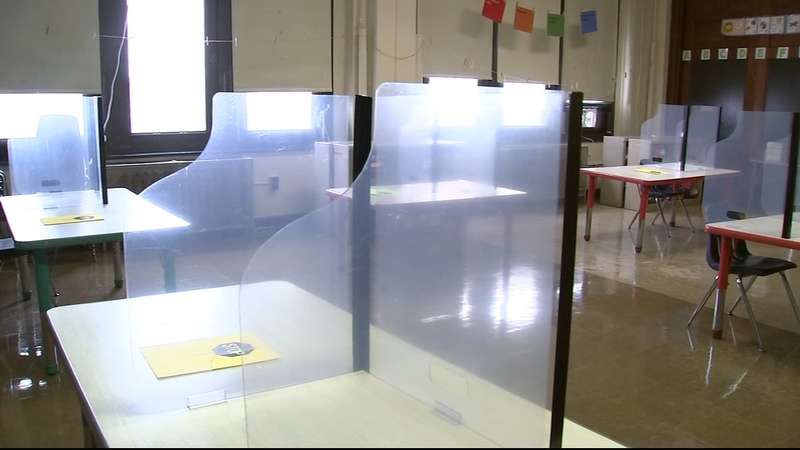 PHILADELPHIA (WPVI) -- The School District of Philadelphia announced Wednesday that the return of in-person learning will be delayed one week.

"...Due to ongoing third-party mediation requested by the Philadelphia Federation of Teachers, the start of our plans to slowly and safely begin phasing students and staff back into our schools will be delayed one week," school officials said in a letter posted on their website.

The return to the classroom will begin on Monday, March 1, starting with PreK-2 students whose families chose hybrid learning in the fall.

Hybrid learning will only be two days a week for students who opted for it. Students will be broken up into two groups. One group will report to school on Mondays and Tuesdays, and Thursdays and Fridays will be for the second group.

"Safely returning our kids to their schools in phases is a crucial step to help restore the sense of community and connectedness that so many of our students want and need," the letter said.

Last week, Superintendent Dr. William Hite and other school and health officials led the media on a tour of George W. Nebinger School in South Philadelphia, to show the measures that have been taken to protect students and teachers from COVID-19.

Walking inside a classroom, there were bold yellow signs on the ground telling people to keep their distance. Desks have individual plexiglass around them and are spaced out from one another. Classrooms shown on the tour were limited to six students and four students per class.

"I can confidently say that our schools are ready to open with the proper precautions in place, and that time to resume in-person learning is now," said Dr. Hite.

Wednesday's announcement came as a disappointment to Hite.

"These measures meet and, in fact, exceed the conditions that the district and the PFT have agreed to in a memorandum of the agreement we both signed last year," he said.

"It isn't good enough. And that's why we chose to use a clause in the memorandum of the agreement between the school district and the PFT to have a third party neutral resolve the issue in dispute, which is adequate ventilation in classrooms," he said.

Outside each classroom, there will be an occupancy list, based on square feet and ventilation. The teachers will be trained to use a camera and microphone to reach the students learning online, while also teaching in person.

The School District invested nearly $4 million to assess ventilation in every school, and in every space they intend to use, according to Dr. Hite. They will be installing window fans in 32 schools that do not have operating ventilation systems.

"I know the fans may not look pretty, or fancy, but scientifically they perform the job we need them to do," said Dr. Hite. "The fans deliver enough outside airflow to deliver enough occupancy to support the air flow of up to 18 people in the classroom, that is before we apply social distancing requirements."

Dr. Hite stressed the priority is safety, not elegance or beauty. Water fountain spouts have been taped off, but students can still fill up their water bottles contactlessly. The classroom temperatures will be at 68 or above.

Once in-person learning begins, building engineers will do safety checks in classrooms to make sure the fans are operating properly, and the room temperatures are appropriate.

The district is also requiring Covid -9 testing for students who do return to school buildings. Parents who do not consent to their children being tested must keep them in virtual learning.

The district also announced its "return strategy" would include weekly rapid testing for every staff member working inside schools.

Teachers Action News spoke with said while virtual teaching is harder, they are opting for it right now since they do not believe it's safe to return to school yet.

"The kids are frustrated, the teachers are getting frustrated, we're getting tired, this is a lot harder for them and for us," said Felicia Atwell, a third-grade teacher at Rowen Elementary School.

The City of Philadelphia is set to begin a COVID-19 vaccination plan that covers all employees of public, private, charter and parochial schools. It also includes nursery schools and Pre-K programs.