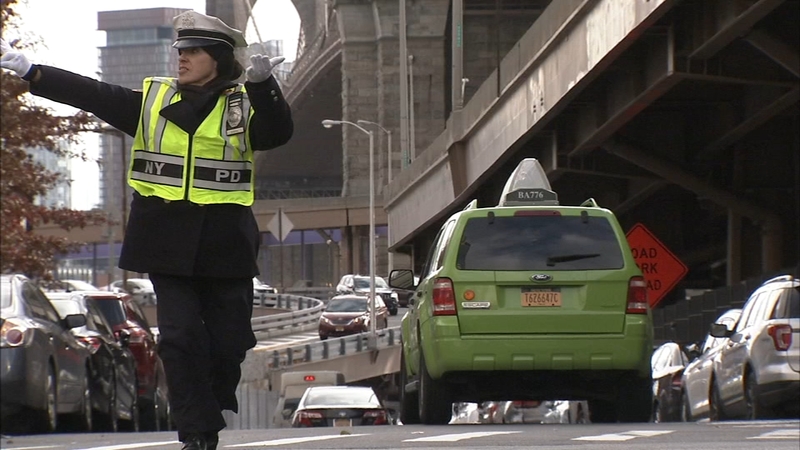 PHILADELPHIA (WPVI) -- Philadelphia is considering a new class of enforcement officers to ease gridlock in the city.

Our cameras were recently given exclusive access as local officials met with organizers of a similar program in New York City.

"I think the thing that most interested me was the level of commitment that is clear that New York has in terms of moving traffic and moving traffic safety," Clarke said.

Clarke says the intense traffic gridlock, in Center City specifically, has to change and now is the time.

"You come down here on the weekend and it is bumper to bumper. The reality is you have to figure out a way to manage that traffic," Clarke said.

Members of New York's Traffic Enforcement are trained at the police academy for 15 weeks.

"They are trained in the vehicle traffic law, traffic regulations, how to direct traffic safety-wise," NYPD Chief of Transportation Thomas Chan said.

Members of the Task Force also have the power to issue parking violations.

And while these men and women are not police officers, they are still members of the NYPD family.

Clarke says in a city with 300-plus homicides a year, police officers should be focused on crime.

"As many of the police that we can deploy to do violent crime, we should do that, not have them out there conducting traffic," Clarke said.

But Fraternal Order of Police president John McNesby has reservations concerning a program like this.

"We have enough officers now that could be put back in the traffic unit to solve some of these problems," McNesby said.

McNesby says it's in their contract to handle traffic and that would be tough to change.

"That's police work and police work only; unless we can come to some kind of compromise, we are going to be at a stalemate for good here," McNesby said.

Clarke feels strongly that an agreement can be made with all parties and that this would greatly benefit the city.

"You look at them and you see how they move traffic, it is amazing and they do a great job and I don't know why we wouldn't do that here in the city of Philadelphia," Clarke said.