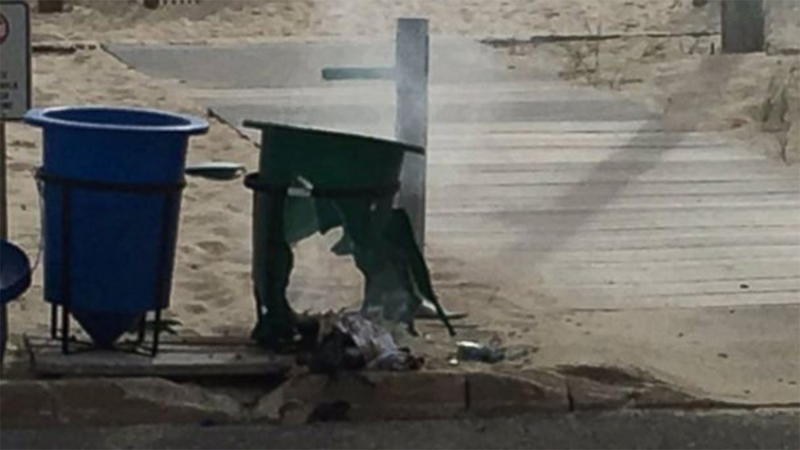 SEASIDE PARK, N.J. (WPVI) -- Jersey Shore beaches were reopened Sunday as an investigation continued into a pipe bomb explosion at a seaside community before thousands of runners were to participate in a charity 5K race to benefit Marines and sailors.

Multiple law enforcement officials tell ABC News that investigators are exploring the possibility that this explosion, and one later in the day in New York City, are linked to the same bomber or bombers by what appear to be similar types of cell phones. The sources caution that this is only a line of inquiry and not a conclusion. The probes remain separate, but coordinated.

They said each bomb contained different materials, but added that they weren't ruling anything out yet. The New Jersey device contained evidence of a black powder.

Special Agent Michael Whitaker, a spokesman for the FBI office in Newark, said state and federal investigators were still canvassing the Seaside Park area Sunday and conducting interviews. He said travel restrictions imposed after the blast had been lifted.

Appearing Sunday on CNN's "Inside Politics" with Jake Tapper, Gov. Chris Christie said state police had "some promising leads" but no suspects. The Republican governor said people should not jump to conclusions about who may be responsible for the blast or what the motive was.

Christie said that by his own definition, he personally considered the blasts "terrorism" as well as a knife attack at a Minnesota mall.

No injuries were reported in the seaside explosion. The race had been scheduled to start shortly before the blast occurred, but was delayed due to the large numbers of people registering for the race and reports of an unattended backpack being found.

Officials noted that if the race had started on time, a "good number of people" would have been running past the area where the explosion occurred.

"The fortunate thing here in New Jersey is that no one was injured," Christie said. "We pray for those people who were injured in those other attacks."

Joggers, walkers and bikers were out and about Sunday on the boardwalk and nearby streets. Some stopped to take pictures of the site where the blast occurred and of television trucks that remained in the area.

"It's the first time I'm leery of walking around and everything," borough resident Don Bernabe told the Asbury Park Press. "I walked by the first set of garbage cans back there coming this way, and it was weird, but that feeling went away. You never get that feeling around here. Ever."

"I have to admit, yes, this whole thing is pretty disconcerting. You don't think these types of things can happen around here, but something like this reminds you it can happen anywhere. It's sad, actually," she said.

"I strongly condemn the apparent terrorist attacks in Minnesota, New Jersey, and New York. I pray for all of those who were wounded, and for their families. Once again, we saw the bravery of our first responders who run toward danger to help others. Their quick actions saved lives. Law enforcement officials are working to identify who was behind the attacks in New York and New Jersey and we should give them the support they need to finish the job and bring those responsible to justice - we will not rest until that happens. ISIS has claimed responsibility for the attack in Minnesota, and this should steel our resolve to protect our country and defeat ISIS and other terrorist groups. I have laid out a comprehensive plan to do that. This includes launching an intelligence surge to help identify and thwart attacks before they can be carried out, and to spot lone wolf attackers. We also need to work with Silicon Valley to counter propaganda and recruitment efforts online. Americans have faced threats before, and our resilience in the face of them only makes us stronger. I am confident we will once again choose resolve over fear."
_____