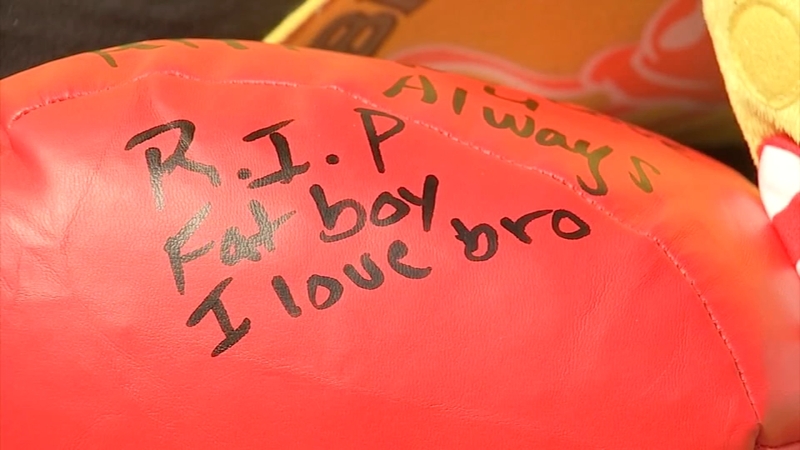 Police: Assault rifle used in killings of 2 men in Kensington

PHILADELPHIA (WPVI) -- Philadelphia police are on the hunt for a pair of suspects after two men were shot and killed in a hail of bullets in the city's Kensington neighborhood.

The victims have been identified as 23-year-old Anthony Torres of the 4000 block of North Marshall Street and 38-year-old Jose Vega of the 800 block of East Thayer Street.

Around 30 shell casings were outside a corner store at H and East Thayer streets Wednesday night.

A witness told Action News she saw Torres, a store clerk, and Vega outside of the store about to walk in when a tan or gold van rolled up to the intersection.

Police have recovered surveillance video that shows the shooting. They say two suspects, one carrying a military-style assault rifle and the other holding a semi-automatic handgun, unleashed a flurry of bullets.

"The shooting continued against both victims even after the victims had fallen to the ground. The gunmen together fired nearly three dozen rounds at the victims in this attack," said Lt. Norman Davenport.

"The damage that these weapons can cause is tremendous. The velocity of some of these rounds exceed three-thousand feet per second, and when you talk about a densely populated area, where children can be playing four blocks away, they would be struck by one of these rounds. We are very fortunate that no one else was wounded or killed in this attack," Davenport said.

Police news conference on double homicide in Kensington on August 23, 2018.

The pain is still fresh for friends of the victims' involved in Wednesday night's shooting in the city's Kensington neighborhood.

"I received a phone call that my friend is laid out dead with 35 shots. You see circles there and circles there and bullet holes through the gate. He didn't deserve this. He has two lovely kids, beautiful children," said Luis Rodriguez.

A makeshift memorial now grows where two men lost their lives in a barrage of bullets.

See raw video from the Action Cam from the scene of a double shooting on H Street in Kensington on August 22, 2018.

"I am trying to hold in my emotions, so excuse me, but is just very heartbreaking knowing that kids are involved for one of the victims and the family is very extensive, and it really hurts my heart," said Confesor Novas Jr.

Commissioner Ross said it appears at least one of the two victims was targeted, but the motive remains unclear.

"If you can do something like this, fire this many rounds...nothing is going to stop guys like this from doing this again," said Commissioner Ross.

The suspects were described by police as:

Suspect #1: Light complexion, heavyset male wearing a black Adidas hooded sweatshirt with white stripes down the arms and a large Adidas emblem on the back, tan shorts and white /black sneakers armed with a long gun.

Philadelphia police are investigating a shooting that left two men dead in the city's Kensington's neighborhood as reported by Christie Ileto during Action News at 11 on August 22,