WPVI
By Chad Pradelli
Philadelphia police are on the hunt for Donnell Miller Jr., wanted for allegedly opening fire on Kyle Brantley.

It happened around 2 a.m. Saturday at the parking lot of a Sunoco gas station at the intersection of 52nd Street and Lancaster Avenue in Parkside.

Police said Brantley staggered to his pickup truck, then collapsed in the front seat as the truck rolled into a pole. According to police, Miller then fled in his tow truck.

Investigators said the shooting was caught on surveillance video.

"It shows him in an argument," said Philadelphia Police Capt. John Ryan. "The argument escalated to a point where Donnell Miller Jr. returned to his truck and retrieved a handgun."

Action News conducted an investigation into the tow industry this summer, exposing how tow drivers were skirting the rotational tow system in Philadelphia.

We caught up with Miller Jr. and his father outside our studios as they responded to an accident before police or fire had responded.

Police said Miller's father was on scene when the shooting happened. As his son allegedly fled in his tow truck, the father remained and has been cooperative with police.

Court records reveal both Millers have a string of arrests for drugs, guns, and assault.

"We later got an arrest warrant and recovered his tow truck, but at this moment Donnell Miller Jr. is at large" said Ryan.

Donnell Miller Sr. said he had no comment about the shooting.

Police said Miller may be driving another tow truck. He is considered armed and dangerous. 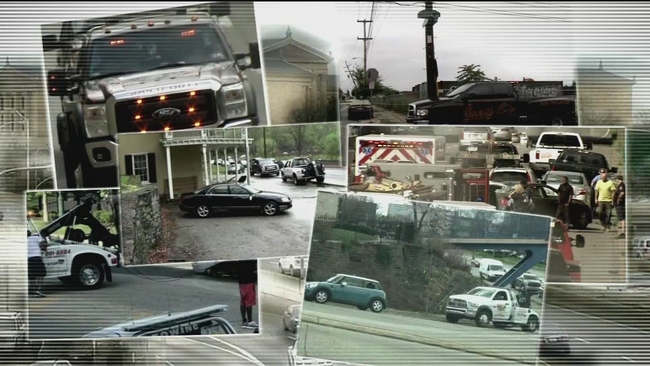