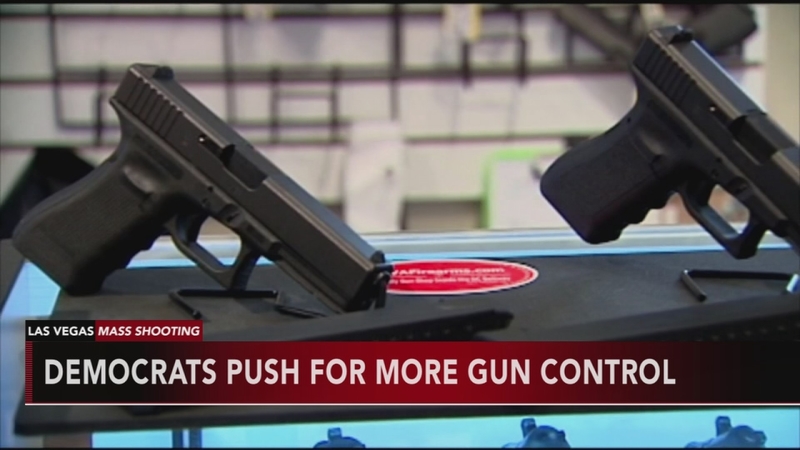 WASHINGTON (WPVI) -- House Republican leaders called for unity and prayer after the deadly mass shooting in Las Vegas, but offered no new legislation to tighten gun laws and said a bill to ease regulations on gun silencers would be shelved indefinitely.

"We are all reeling from this horror in Las Vegas," Speaker Paul Ryan said at a news conference on Tuesday. "This is just awful."

Ryan said there's no plan for the House to act soon on a National Rifle Association-backed bill to ease regulations on gun silencers. A House panel had backed the bill last month and lawmakers were expected to move ahead on the measure.

The bill is "not scheduled right now. I don't know when it will be scheduled," Ryan said.

Instead, Ryan and other GOP leaders urged prayers to unify the country and said a positive way to respond to the shooting is to donate blood. Ryan said the actions of the gunman who killed at least 59 people and wounded hundreds more will not "define us as a country. It's not who we are."

Sen. Richard Durbin of Illinois, the Senate's No. 2 Democrat, pushed Congress to pass a universal background checks bill and "commonsense gun laws" to help prevent the next mass shooting.

"Gun violence is a public health crisis. There is no single law or policy that would prevent every tragic shooting, but let's start working together to do something," Durbin said on the Senate floor. "We can't stop the shootings that have already happened in Las Vegas, Chicago, Roseburg, Oregon, and across the nation. We failed to respond in time for those victims and their families. But if we work together, we can stop shootings in the future."

Besides the silencer measure, House GOP leaders had been moving forward with a bill to allow people with concealed-carry permits to take their weapons to other states. Republicans had been upbeat about prospects for legislation, but votes on both measures seemed unlikely.

Sen. Chris Murphy, D-Conn., who favors gun control, said Monday it was "time for Congress to get off its ass and do something." In an outdoor news conference Monday, former Arizona Rep. Gabrielle Giffords, grievously wounded in a 2011 attack, turned to the Capitol, raised her fist and said, "The nation is counting on you."

But no action was expected, as other mass shootings in Colorado, Connecticut, and Florida, and even attacks on lawmakers, failed to unite Congress on any legislative response. A bipartisan bill on background checks failed in the Senate four years ago, and since then Republicans have usually pointed to mental health legislation when questioned about the appropriate congressional response to gun violence.

In an interview with The Associated Press last month, Ryan said Congress needs to fund mental health reforms. "But if you're saying that this Republican Congress is going to infringe upon Second Amendment rights, we're not going to do that," he said.