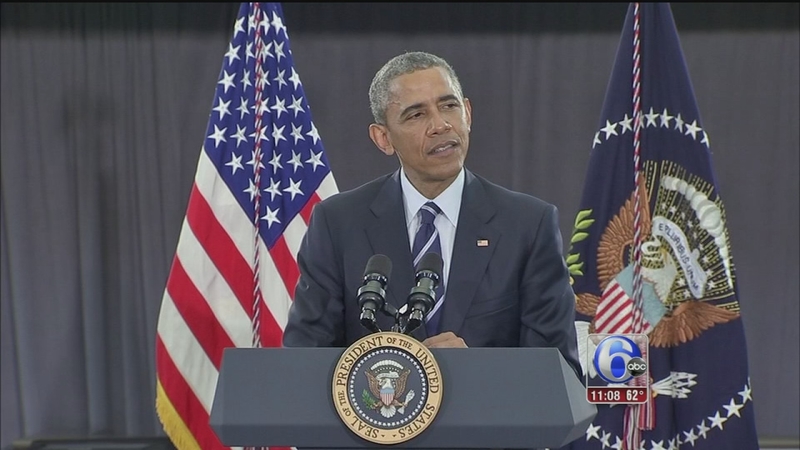 The president says such an image sends the wrong message to the community the police is trying to protect. And the relationship between the community and police is exactly the reason Obama was in our area today.

"I've come here to Camden to do something that might have been unthinkable just a few years ago and that is to hold you up as a symbol of promise to the nation," the president said.

President Obama spoke at the Ray & Joan Kroc Community Center on Harrison Avenue praising the results of Camden County's two-year-old Metro Police Division, which has cut murders almost in half and reduced other violent crime in the city.

After touring police headquarters with Chief Scott Thomson, Obama acknowledged that the police reforms here are still a work in progress, but that Camden is on to something that police departments elsewhere should look at and adopt, including technology and community policing, where officers walk a beat and get to know the community.

President Obama said, "When you match courage with compassion with careg and understanding of the community, like we've seen here in Camden, some really outstanding things can begin to happen."

The president's visit is a huge shot in the arm for Camden, long considered one of America's poorest and most dangerous cities.

Lou Cappelli, Camden County Freeholder Director, tells us, "This city for too long has been painted in a negative fashion. Things are moving in the right direction. There's a rebirth going on in this city and the residents deserve what they are getting today, which is a pat on the back from the president."

Residents who came to see the president are excited.

Resident Peggy McPherson tells us, "We need all of the assistance from all government officials. And if it starts from the top and works down, then I think we have a fighting chance to bring the city back to a good healthy place."

Before he gave Monday's speech the president met with some police officers and local children, including members of the Camden high School basketball team who have personally been touched by violence.

As the president said, there's still work to do. The Metro Police Division has a high turnover rate, but they are working on that. But in President Obama's view, community policing is the way to go to try to reduce tensions between police and the public nationwide.