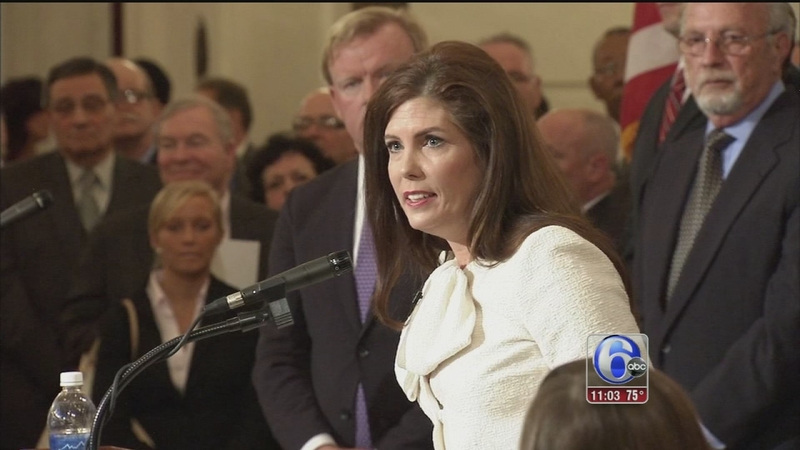 NORRISTOWN, Pa. (WPVI) -- Pennsylvania Governor Tom Wolf is calling on Attorney General Kathleen Kane to step down in the wake of criminal charges filed against her.

Wolf made the following statement Thursday during a public event at East Stroudsburg Elementary School in Monroe County:

"I am calling on her to step aside, step down as attorney general, because I think she cannot do what she has to do as the top law enforcement officer in Pennsylvania while she's facing these serious charges," he continued.

The state's top prosecutor is accused of disclosing information about a 2009 grand jury investigation to the Philadelphia Daily News last year, and lying about her actions under oath.

Kane allegedly leaked information to a political operative to pass to the news media "in hopes of embarrassing and harming former state prosecutors she believed, without evidence, made her look bad," Ferman said.

The grand jury's recommendations were then referred to Ferman, along with a later allegation that she fired a staff prosecutor whose testimony helped build the leak case against her.

Kane has consistently denied that she broke any laws. The 49-year-old has acknowledged giving information to the Daily News, but denied it was bound by secrecy laws and said she hasn't broken any laws. She also contended the prosecutor was fired for job-related performance, not revenge.

Kane reiterated Thursday that she would not resign her office.

"I am very disappointed the district attorney has made the decision to pursue this case. I have maintained my innocence from the day these allegations surfaced and I continue to do so today," Kane said in a statement.

"I intend to defend myself vigorously against these charges. I look forward to the opportunity to present my case in a public courtroom and move beyond the behind-the-scenes maneuvering that has defined the process to this point," Kane continued.

Kane's 2012 election victory made her the first woman and the first Democrat to be elected Pennsylvania state attorney general. But today's criminal charges mark a new low in her tumultuous three-year tenure, further weakening her shaky hold on an office that has seen an exodus of top aides, fumbled corruption cases, feuds with former prosecutors and misstatements she later had to retract.

Kane has vowed to run for office again in 2016. She has accused her critics and investigators of trying to undermine her because she had dared to take on a corrupt, old-boy law enforcement network. Newspaper editorial boards across the state have called for her to resign.

Relying heavily on her trucking magnate husband's wealth, the Scranton native campaigned as a disrupter of the status quo and pledged to investigate whether politics played a role in the three years it took to investigate and charge former Penn State assistant football coach Jerry Sandusky with child sex abuse crimes.

At first, Democrats lauded the former Lackawanna County prosecutor as a rising political star. They cheered her for refusing to defend Pennsylvania's law banning recognition of gay marriage and rejecting then-Republican Gov. Tom Corbett's contract with a private firm to run the Pennsylvania Lottery. Some Republican lawmakers, meanwhile, accused her of playing politics and raised talk of impeachment.