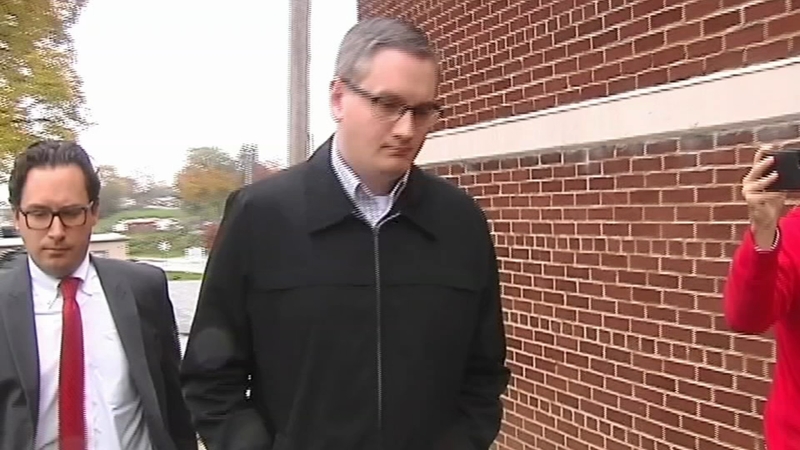 ALLENTOWN, Pennsylvania (WPVI) -- A Roman Catholic priest in Pennsylvania has been sentenced for groping a 17-year-old parishioner and sending her lewd photos and a video.

The Rev. Kevin Lonergan was sentenced Monday to one to two years in prison for indecent assault, The Morning Call reported.

Authorities say Lonergan met the teen at St. Francis of Assisi Church in Allentown, where she and her family worshiped. Lonergan, 31, admitted to rubbing his body against hers in a sexual manner and sending her 20 sexually explicit images and one video.

Lehigh County Judge Maria Dantos revealed during the hearing that it was not the first allegation of this kind against Lonergan.

Matthew Kerr, spokesman for the Diocese of Allentown, said Lonergan was previously the assistant pastor at St. Jane Frances de Chantal Church in Palmer Township and was removed during an investigation into what was determined to be an unfounded "concern."

Chief Deputy District Attorney Matthew Falk says the investigation into the earlier allegation against Lonergan stalled when the family and girl refused to cooperate with law enforcement.

Lonergan was restored to ministry and appointed as assistant pastor at the Cathedral of St. Catharine of Siena in Allentown.

Dantos compared Lonergan's reassignment to a practice condemned since the 1980s: relocating a troublesome priest.

"We are still transferring priests that molest children?" Dantos asked. "If he had been sanctioned and fired, this victim would not be a victim."

Dantos referenced a report during sentencing that described Lonergan's previous allegation as "hands-on molestation" of a 15-year-old girl.

The Allentown Diocese said in a statement that it's inaccurate to say it transferred a priest who committed an offense. The diocese said the statement Lonergan was reassigned after Northampton County Children and Youth - a state agency tasked with the protection of children and youth - decided the allegation was unfounded.
Report a correction or typo
Related topics:
allentownpriest sex abuse
Copyright © 2022 WPVI-TV. All Rights Reserved.
TOP STORIES
Teen took action after child hurt in bonfire explosion: Officials
Yandle cheered for 964th game, Flyers booed for losing 12th straight
Relief coming for residents enduring deafening steam plant noise
Son of Philly police officer shot, killed during apparent robbery
US combat jet crashes in South China Sea exercise, 7 hurt
US orders 8,500 troops on heightened alert amid Russia concerns
Another volatile day on Wall Street. Is it time to worry?
Show More
Amy Schneider now has 2nd most consecutive 'Jeopardy!' wins
Philly sees more graffiti during COVID, but artists say it's an outlet
Mayor Kenney to undergo heart procedure Tuesday
Tensions escalate over shrimp among the women on 'The Bachelor'
AccuWeather: Back to the 40s Today
More TOP STORIES News