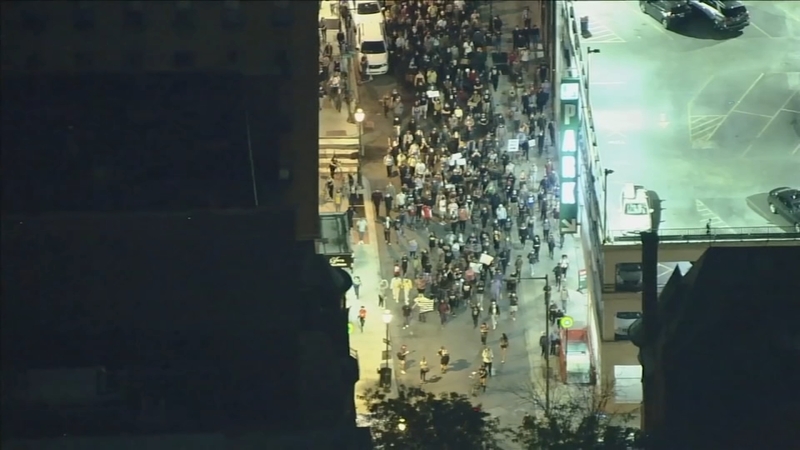 Earlier in the afternoon, officials announced that Louisville Officer Brett Hankison was charged with three counts of wanton endangerment in connection to the police raid on the night of March 13 that claimed the life of Taylor.

A grand jury brought no charges for killing Taylor, who was shot multiple times by police who burst into her home while serving a warrant. During the incident, Taylor's boyfriend shot and wounded a police officer. State Attorney General Daniel Cameron said the officers' shots that killed Taylor were fired in self-defense.

In Philadelphia, protesters took their message to Center City streets.

"They may have gotten this right to the letter of the law," said Stephen Flemming. "But someway, somehow, that officers firing indiscriminately into a house such that the peoples' lives next door were in danger, which is what the one indictment was for, I do believe there could have been additional charges."

"I think it's pretty obvious that she was murdered," said Helen Allison.

At least 100 demonstrators rally at 15th and Market outside of City Hall following a Kentucky grand jury’s announcement in the #BreonnaTaylor case @6abc pic.twitter.com/VDxswe8c9a

"I know that many Philadelphians are feeling disappointed, frustrated, and even outraged, following today's announcement by Kentucky Attorney General Daniel Cameron," said Kenney. "The City of Philadelphia fully supports the First Amendment rights of our residents, but we also want to ensure that any demonstration activity that happens is done in a safe, lawful manner. We are not aware of any specific threats of violence or looting, but we are sharing guidance to help businesses be prepared in case the situation escalates."

Soon after the ruling in the case, protesters in Louisville also took to the streets. Authorities said two officers were shot and wounded Wednesday night during the demonstrations.

Interim Louisville Police Chief Robert Schroeder said a suspect was in custody but did not offer details about whether that person was participating in the demonstrations. He says both officers are expected to recover, and one is undergoing surgery.

He says the officers were shot after investigating reports of gunfire at an intersection where there was a large crowd.

Several shots rang out as protesters in downtown Louisville tried to avoid police blockades, moving down an alleyway as officers lobbed pepper balls, according to an Associated Press journalist. People covered their ears, ran away and frantically looked for places to hide. Police with long guns swarmed the area, then officers in riot gear and military-style vehicles blocked off roadways.