Puppy recovering from emergency surgery after being shot in North Philadelphia

Police say the man suffered gunshot wounds to his legs, and the puppy named 'Ruby' was shot in her neck.
WPVI
By Katherine Scott and 6abc Digital Staff 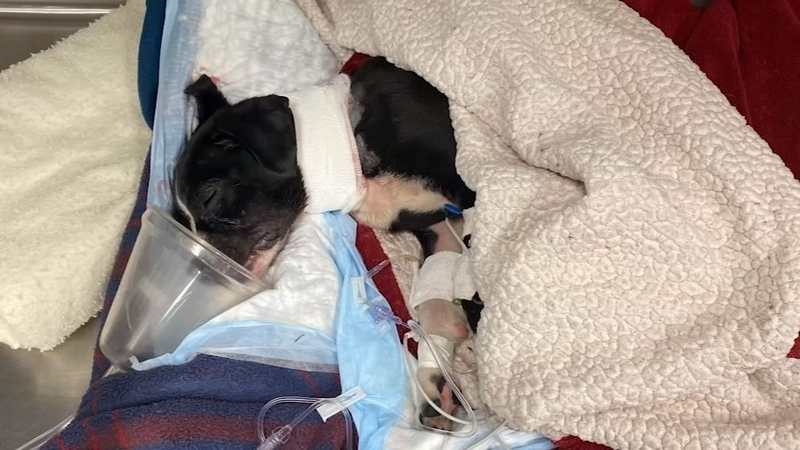 PHILADELPHIA (WPVI) -- Police are investigating after a 26-year-old man and a puppy were shot Tuesday night in North Philadelphia.

It happened around 9 p.m. in the area of N. Warnock and W. Oakdale streets.

Police say the man suffered gunshot wounds to his legs, but still managed to walk to Temple University Hospital and was listed in stable condition.

The pitbull puppy, named Ruby, was about to be sold when she was shot in her neck.

"I heard the shots," shared one neighbor. "It was like three or four back to back."

Ruby was then rushed to Penn Vet by police.

"We received a call late Tuesday night about a puppy who had been shot," said Heston. "We had gotten her taken care of at Penn. We had called- given financial OK for whatever it was going to cost."

Heston says Noah's Ark is now raising funding to cover the cost of the surgery in the amount of $10,000.

They are also looking for someone to foster Ruby.

"We are going to be looking for a foster for Ruby. Hopefully that foster will be within about an hour of Philadelphia to make sure she can continue her care," Heston added.

On Thursday, Penn Vet spokesperson Marty Hackett said Ruby is being released from the Intensive Care Unit to the general ward.

Hackett added that although the dog was still critical, she is stabilized and improving. He shared her prognosis for a full recovery is promising.