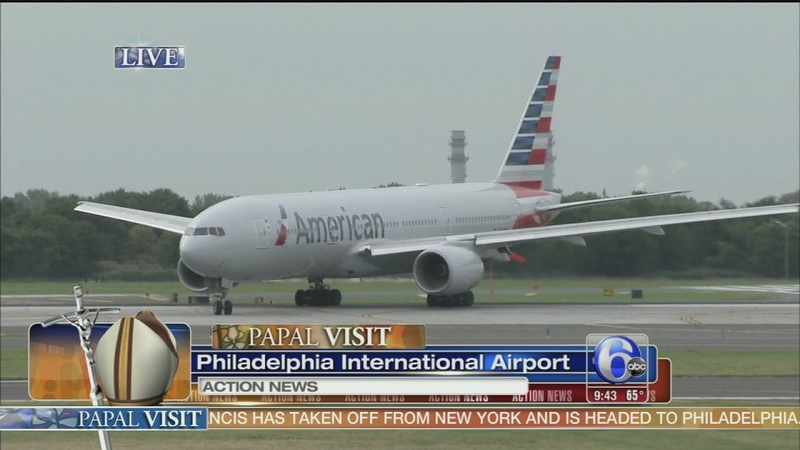 As Pope Francis was landing in Philadelphia, Action News anchor Jim Gardner recited a letter he wrote for the Pontiff.

Letter to Pope Francis to be read after Landing:

Pope Francis, while you wait to disembark from Shepherd One at our airport, it occurs to me you may not know a great deal about our city. After all, it is your first visit. It's not at all like Washington or New York. Ours is a city of immense pride, but it gets complicated sometimes, maybe because the outside world often sees us as less than we are because we're squished in between those two cities you have already visited.

We are a city with a proud immigrant past, present and future. I know you'll be talking to and about immigrants at Independence Hall. A lot of folks here are looking forward to that.

We are a city of great history, a vibrant present and a very promising future. If we can figure out how to fund our public schools, we should be in terrific shape. Oh, then there're the Eagles. I know you're a huge soccer fan in Buenos Aires, so you can understand the angst going on around here with the team's mystifyingly bad start to the new season. But on to other matters.

There are about 1.4 million Catholics in the Philadelphia Archdiocese, and like elsewhere in America, a lot of them question some of the traditional church teachings concerning things like birth control and divorce and remarriage. At least that's what all the polls show. But the heart and soul of American Catholicism was formed here, the first catholic schools were built here, and as proud as Philadelphia is, so is its Catholic community.

But there are issues. The Archdiocese has had to shutter churches and schools. There were once 266 parishes, now there are 219. And while the Hispanic church is thriving, some other parts of the Church are having a tough time. But I know you see that in so many other places, Philadelphia is hardly unique in that way.

Archbishop Chaput has had the thankless task of trying to reduce the Archdiocese's crippling debt, and he's been making good progress, even as he spends 4 million dollars a year on programs to help the poor. We know how central that is to your vision of what the priesthood should be. Of course there's also this perception out there that Archbishop Chaput is sometimes seen as your ideological adversary, that he's identified with the so-called conservative wing of the Church. He did use the word confusion to describe last year's Synod of the Family, where thru proxies like German Cardinal Walter Kasper, you encouraged conversation about many of the controversial issues facing the Church. I've read that the word "confusion" is often seen as a code word for opposition to the papacy. He insists that any perceived differences between the two of you are a fabrication of the media. It's true he has had some very complimentary things to say about you. Here's one: "Thanks be to God that the Lord has given us a pope with such universal appeal to so many people."

You should know, but you probably already do, that many folks in the Archdiocese have been hurting, yearning for the parishes of their childhood, stung by the sex abuse scandal, yes, that's really been difficult, and trying to reconcile their faith to a changing world. But they're going bonkers about you, and can't wait to see you.

You should know that the City of Philadelphia has been looking forward to this event with enormous anticipation. Yes, there are some people who live and work in the secure zones who feel inconvenienced by all of this, but they'll get over it, and the lasting legacy of the event will far outweigh the temporary irritations of a few residents. There is a palpable sense of excitement, even awe, that you're finally here. We hope you not only enjoy your stay, but that in the short time you have here, that you learn about the uniqueness of Philadelphia. I think it will remind you, perhaps, of your hometown of Buenos Aires more than the American cities you've seen so far: oozing with history but adapting to the modern world. Hmmm, correct me if I'm wrong, but that sounds a tad like what you're trying to accomplish with your papacy.

Now you have only one serious choice to make while you're with us, and unfortunately, nobody can really help you. Here it is. Pat's or Geno's? If you don't know what that's about, then you haven't been adequately prepped for your visit.

Holy Father, welcome to the city of Philadelphia. We're glad you're here.