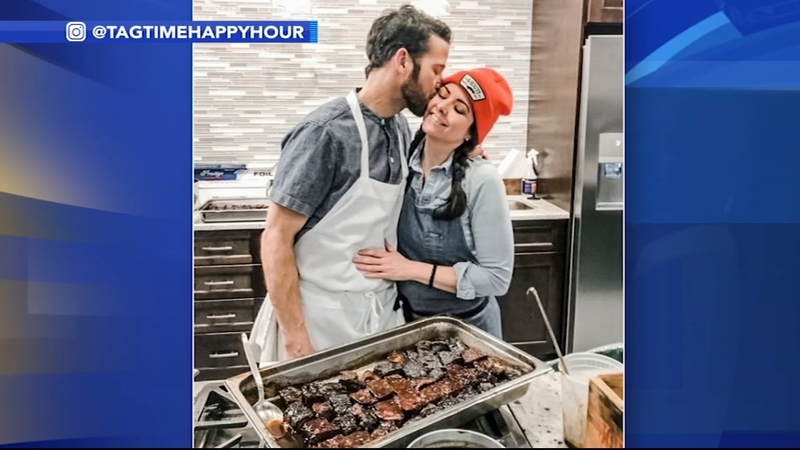 PHILADELPHIA (WPVI) -- A local couple in the restaurant industry, battling cancer together, are now raising money for research and support to help other families.

They're doing it through a series of special happy hour events and this weekend, their industry friends on Rittenhouse Row are joining them in a big way.

Jim and Kristina Burke live in the Rittenhouse neighborhood. They've been in the restaurant industry for two decades.

They're both in their 40s, they have two young kids and over the past year, they both found themselves battling cancer.

On what would typically be Rittenhouse Row's Spring Festival, dozens of local restaurants are joining them for what they call Tag Time Happy Hour.

Jim Burke, executive chef at Wm. Mulherin's Sons in Fishtown, was diagnosed with Stage 4 lung cancer last August, just a few months after his wife Kristina was being treated for Stage 2 breast cancer.

"While Kristina was getting her surgical procedures to remove her cancer, is when I got cancer," Jim said. "It's a pretty remarkable timeline."

With his first pill on August 27th at 5 p.m., Kristina called it Tag Time Happy Hour. The "tag" refers to Tagrisso. Friends and neighbors joined in with well wishes and bottles of wine on their stoop.

"They would knock and run and say, 'This is a little something to keep the 'tag time' happy,'" Kristina explained.

"They said, 'I'm tired of just thinking about you guys, I want to do something,'" said Jim.

More than 40 spots around the country have since joined in.

Local restaurants like Pizzeria Stella in Old City let the Burke's kids, Daniel and Sadie, created their own ice cream flavors. All of the proceeds go towards lung cancer research and support.

"Everybody wants to do their best to support this couple," said Ellen Yin from High Street Hospitality Group.

The Burkes are Philly natives, they've been in our city's restaurant scene for the past 20 years and this return of support is emotional.

"It means a tremendous amount to me and my family to know that we live somewhere that's not just on a map," said Kristina.

Tag Time Happy Hour Weekend runs May 21 to May 23, 2021 and there are other events happening all over the city.