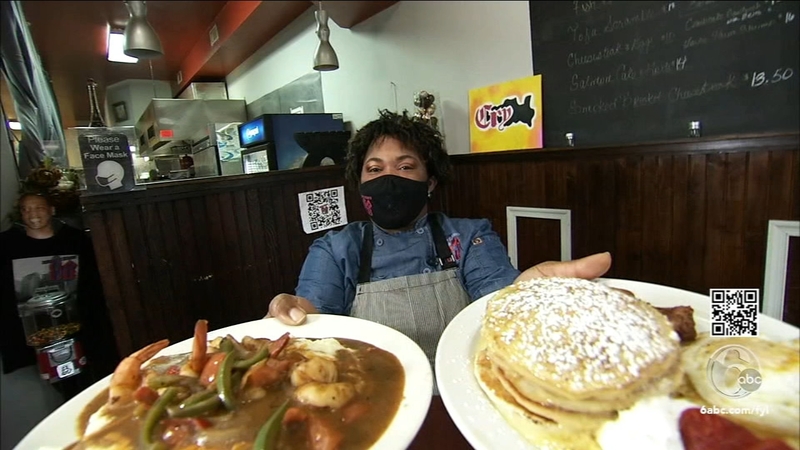 PHILADELPHIA (WPVI) -- In honor of Martin Luther King Day, we are putting a spotlight on Black-owned restaurants.

Chef/owner Hayat Ali makes the injera from scratch and offers it as a wrap or traditional style as a huge 'plate' to be covered in the meat and vegetable dishes she prepares using family recipes she learned growing up in Ethiopia.

She also makes baklava and sambusas, known in some cultures as samosas.

She has a coffee machine for those who want to grab and go. But if you want a cultural experience, attend one of her coffee ceremonies, called Buna. She offers them at no cost on Saturdays at noon. The beans are roasted and brewed as you watch, the coffee poured into cups filled with incense. Hayat says it's a twice-daily tradition in Ethiopia where you drink, relax and have good conversation.

Hayat moved to the United States in 1999 and after more than two decades working in hospitality, she opened her first cafe in West Philadelphia in the fall of 2020. Nine months later, she opened her second spot in Germantown, and at both locations, there's a cafe on one side and a market on the other.

She named the West Philly spot Alif Brew and Mini Mart. Alif is the first letter in the Arabic alphabet and, she says, it marks her beginning.

Salam is how you say peace in Ethiopia. And both places are a celebration of Hayat's culture and heritage.

Tanesha Trippett is bringing the brunch at her Brotherly Grub Cafe.

She calls her menu southern with a Philly flair. Her specialties include chicken and waffles, a smoked brisket cheesesteak, and a creme brulée pancake platter with turkey bacon

She makes a New Orleans-style shrimp and grits but adds cheddar cheese to the grits because, she says, "people love cheese in Philadelphia."

Her grandma's salmon cakes and grits are named for her grandma who used to make it all the time. Tanesha's grandmother grew up in Savannah, Georgia, in the Jim Crow South and always dreamed of owning her own food business.

She went to cooking school after working 15 years in finance. She started with a catering company in 2016 followed by a food truck two years later and then Brotherly Grub Cafe opened in the fall of 2019.