Police say Sean Toomey, 15, was getting water from the car when he was shot in the city's Wissinoming section.
WPVI
By 6abc Digital Staff 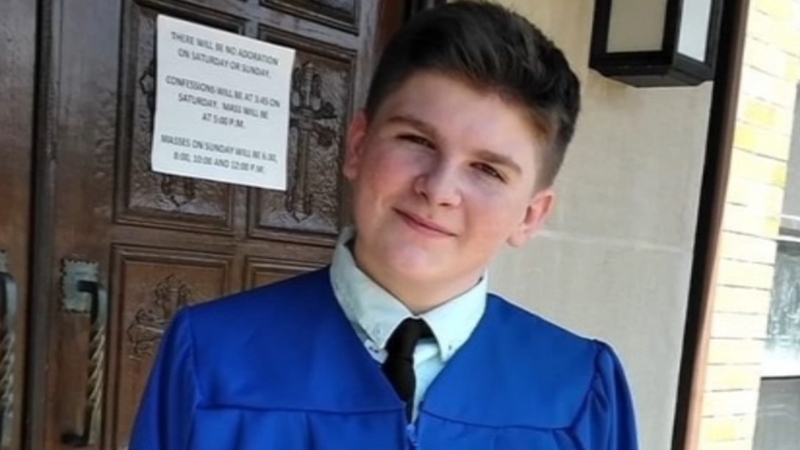 PHILADELPHIA (WPVI) -- Two teenagers are now in custody in the killing of a Philadelphia teen who was gunned down while retrieving a case of water from a car outside his home.

It happened around 9:12 p.m. on March 24 when 15-year-old Sean Toomey walked outside on the 6200 block of Mulberry Street in the city's Wissinoming section.

Police say the teen died the next day.

It's still unclear who shot Toomey, but police say two male suspects were seen moments earlier pulling on a woman's car door across the street.

That woman called her boyfriend for help, and by the time that boyfriend got outside, police say the two suspects ran off.

A teenager was shot as he was getting water from a vehicle outside his home in the Wissinoming section of Philadelphia.

At some point during the incident shots were fired. Police ruled out the boyfriend.

"I heard the two pops and I thought it was firecrackers," said Sean's father, John, in a previous interview with Action News. "But it only takes a second to grab some water and get in the house and he wasn't coming back in. So I got curious. I put my sweatshirt on, and I went outside and I saw him lying on my neighbor's lawn."

Officials tell Action News that 17-year-old Saahir Teagle was recently taken into custody in New Jersey on charges of murder. He will soon be extradited to Philadelphia.

Action News confirms Gardee was arraigned later in the night for murder, criminal conspiracy and other charges. He was denied bail.

According to the Philadelphia District Attorney's Office, Gardee and Teagle were allegedly involved in an attempted robbery at a bank on the night of the shooting. Three males allegedly tried to rob a woman using the ATM at the Citizen's Bank at Frankford and Robbins Street but she was able to get away.

On April 14, authorities responded to an incident at an Airbnb on the 1200 block of Newkirk Street where several firearms were recovered. Both Teagle and Gardee were taken into custody. Teagle was arrested and charged for illegal firearm possession and his firearm was recovered by police. He had not been identified as a wanted suspect for the March 2022 incidents at that time.

It wasn't until June 9 that investigators were able to link all of the incidents together. Authorities say a man was arrested by ATF agents at the 1800 block of Pratt Street and charged with carjacking and related offenses. While being interviewed, the man described an attempted robbery he participated in, along with two friends at a Citizens Bank ATM at Frankford and Robbins Street. The man also provided information about the incident at the Airbnb, which help investigators bring charges in Sean Toomey's murder.

The third man arrested by ATF agents is not believed to have participated in the shooting or to have been on the scene of the shooting, the DA's office said.

"Sean Toomey should be alive today and looking forward to the rest of his life. To those who knew and loved him: The loss of Sean's life is a grave injustice, and we are heartbroken and outraged by his death," said DA Larry Kraser.