Delaware County prepares to vaccinate children as young as 12 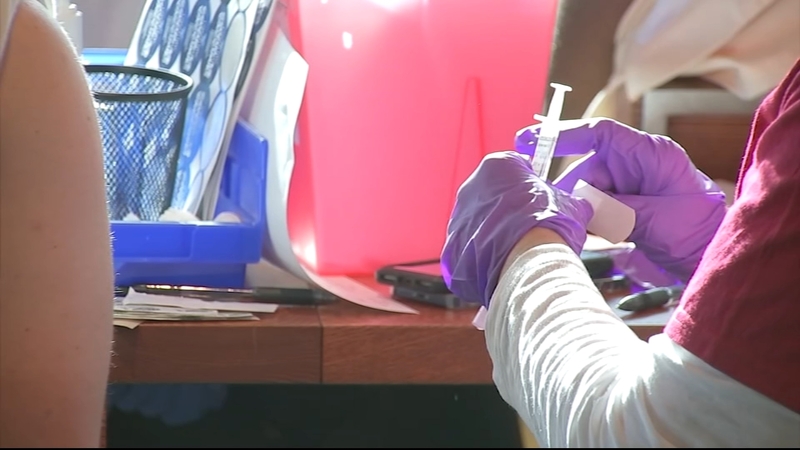 HAVERTOWN, Pennsylvania (WPVI) -- U.S. regulators on Monday expanded the use of Pfizer's COVID-19 vaccine to children as young as 12, offering a way to protect the nation's adolescents before they head back to school in the fall and paving the way for them to return to more normal activities.

Shots could begin as soon as Thursday, after a federal vaccine advisory committee issues recommendations for using the two-dose vaccine in 12- to 15-year-olds. An announcement is expected Wednesday.

In Delaware County, Pennsylvania, officials were already running a successful program, working with school districts on getting teenagers vaccinated.

"We've had a program in place to vaccinate students 16 and up. We've been running school day clinics on weekends and we will be expanding to the 12 and up population," said Councilwoman Christine Reuther.

Anticipating that vaccines for those as young as 12 years old would eventually be approved, the county has also been working on other plans to get this group of the population vaccinated.

"We've been talking to the pediatricians in Delaware County with the idea of getting clinics set up using our medical reserve corps to assist with logistics," said Reuther.

Dr. P.J. Brennan, chief medical officer for Penn Medicine, says the decision that the two-shot regimen is safe and effective for younger children is an important step in the battle against Covid-19

"Kids don't get sick very often, but they can shed virus and they can spread it to adults. So if we're going to get it under control we have to address the younger population as well," said Dr. Brennan.

Dr. Brennan was on hand as Penn Medicine worked with the Philadelphia Flyers to vaccinate employees and fans at the Wells Fargo Center.

The Flyers were offering two free tickets to a game next season for each fan who got vaccinated before Monday night's season finale.

There was some mixed reaction from fans on the Pfizer emergency use approval for kids as young as 12.

"If it's for my child to be safe around other kids, I'm fine with it. I'm a little skeptical but if it's for my little man to be safe and play like he did last year and the year before that time, it's fine," said Greg Harling III from Germantown.

"We're always pretty hesitant so we probably won't get it, but I don't know that we're 'anti' kids getting the vaccine," said Erin Warren of West Grove.