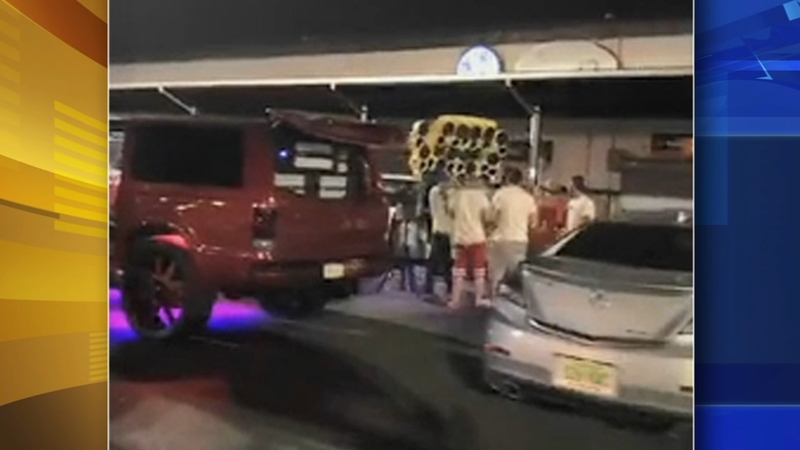 GLOUCESTER CITY, N.J. (WPVI) -- For the past several weeks, residents in Gloucester City have been posting on social media to complain about the blasting music with the hope of finding out where it was coming from, and it worked.

As it turns out, all that noise was happening across the river in South Philadelphia.

A number of people living down by the river in Gloucester City tell Action News that the situation was getting completely out of control.

"It makes the house shake and you can't sleep at night," said Bobbijo Tenney.

So, one of the neighbors took it upon himself to track down the source of the noise, only to find himself in a different state.

His ears lead him across the river down by the stadiums in South Philadelphia.

Sure enough right across the street from Lincoln Financial Field in the parking lot of Jetro Wholesalers he found the issue, and he took video of what he saw.

The video shows what appears to be some kind of showcasing of trucks, cars and SUVs with enormous custom sound systems.

In fact, the music is played at such a high volumes we've had complaints from neighbors in Haddon Heights and Haddon Township as well.

Pictures taken from the gathering give us a better look at some of the systems. They're huge - walls of speakers.

Neighbors say it wasn't just Sunday night, but this has been going on for at least a month.

"Every Sunday night for the past three weeks. Until 3 and 4 in the morning," says Gloucester City resident Robin Allen.

We've reached out to the Philadelphia police about this and they say they're looking into the matter.

Most importantly, we spoke with managers at Jetro Wholesalers, who say they had no idea this was going on. They said they don't lock their gates at night, but added that's going to change moving forward.
------
Send a News Tip to Action News
Learn More About 6abc Apps
Report a correction or typo
Related topics:
societygloucester citysouth philadelphianew jersey newsmusic
Copyright © 2021 WPVI-TV. All Rights Reserved.
More Videos
From CNN Newsource affiliates
TOP STORIES