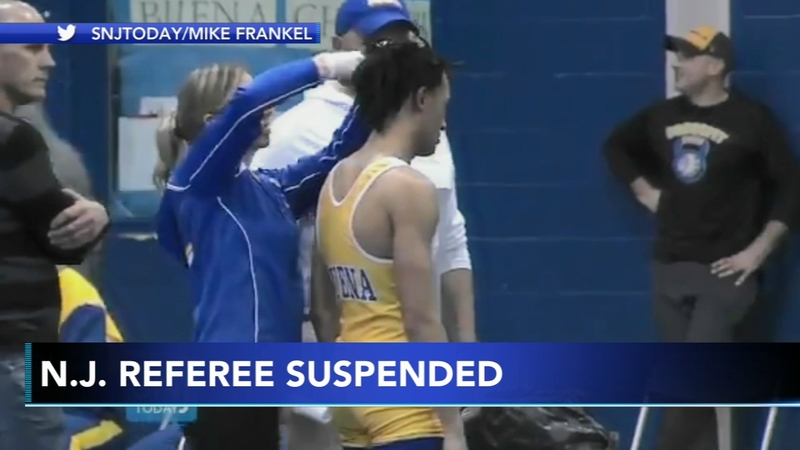 BUENA, New Jersey (WPVI) -- The referee who forced a high school wrestler to cut his hair or forfeit the match has been suspended for the next two seasons, according to the results of an investigation by the New Jersey Division on Civil Rights.

In December 2018, Buena Regional High School wrestler Andrew Johnson, a junior, was told by a referee he had to have his hair cut or forfeit the match.

In a video taken of the incident, you can see his locks getting chopped off by a trainer.

The investigation resulted in the suspension of Alan Maloney, the referee involved, for the next two wrestling seasons and implicit bias training for officials and staff involved in high school athletics across New Jersey, according to a news release.

On Wednesday, the group also issued a new "Guidance on Race Discrimination Based on Hairstyle" to explain how treating someone differently based on a hairstyle could violate the state's anti-discrimination laws and to prevent this type of discrimination moving forward.

"Student-athletes should be able to compete with each other on a level playing field," said Attorney General Grewal. "Racial discrimination in the enforcement of the rules of any sport is inconsistent with the spirit of fair play."

Back in 2016, Maloney reportedly called a fellow referee the N-word during an argument at a post-wrestling tournament get together.
Report a correction or typo
Related topics:
societybuena boroughnew jersey newsracismhigh school sports
Copyright © 2021 WPVI-TV. All Rights Reserved.
NEW JERSEY NEWS