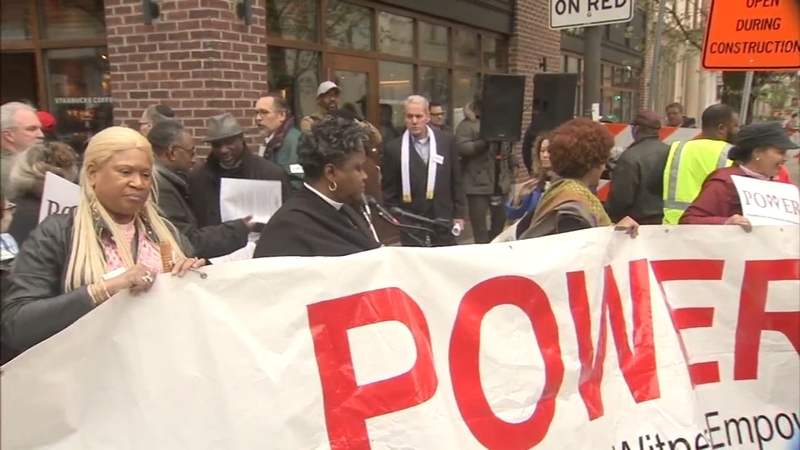 CENTER CITY (WPVI) -- The chief executive officer of Starbucks met with the two black men who were arrested inside a Center City Philadelphia store last week, a company spokeswoman said.

The spokeswoman said CEO Kevin Johnson met with the two men on Monday while he was in town. The spokeswoman declined to comment on the details of the meeting.

Earlier, Johnson said he wanted to meet the two men in person to offer a face-to-face apology.

Peaceful protesters staged a sit-in Monday at the 18th and Spruce street Starbucks.

Local leaders took to a podium outside, just hours after the Starbucks CEO arrived at City Hall to discuss the incident where the two men were arrested for allegedly trespassing while reportedly waiting for a business meeting.

The store manager called 911 after the men asked to use the bathroom but did not buy anything from the store. Protesters had been calling for the manager's firing since the arrests last week.

A company spokeswoman confirms that the manager at the Starbucks who called police is no longer an employee at the store. It is unclear at this time if she is still employed with the company.

Johnson left the meeting vowing that what happened last Thursday will not happen again. Johnson said the company will have a training for store managers on "unconscious bias."

"We're looking at all aspects to ensure that this never happens again," Johnson said Monday.

Asked if the incident was a case of racism, he responded: "Starbucks was built around the concept of a third place where we create a warm and welcoming environment for all customers. What I do know is that did not happen in this instance. And that is what we're focused on."

Councilman Kenyatta Johnson was also a part of the talks.

"The meeting was all lip service. I'm not sold," he said. "I am going to wait and see the change they are talking about put in place."

This second day of protests kept the Starbucks store near Rittenhouse Square from opening to the public. The store reopened on Tuesday.

On Monday morning, the protesters entered the store and chanted, "Starbucks Coffee is anti-black."

"They will not make money at the Starbucks today. We will hit them where it hurts and that's in their pockets," Abdul-Ali Muhammad of the Black and Brown Workers Cooperative said.

Protestor speaking to @Starbucks manager: “We are going to make sure we shut you down” @6abc pic.twitter.com/b6wlPononu

Video of the incident has now racked up over 10 million views and prompted the demonstrations.

Protesters with the Black and Brown Workers Cooperative and Philly for Real Justice lined up outside of the store in the pouring rain beginning at 7 a.m.

Minutes later, they filed in.

The protest forced the store to shut down for the busy morning rush. Some customers got angry as they were turned away.

Though things remained peaceful, tempers flared and, at times, protesters directed their anger at employees, mostly from corporate.

Some hid, while others stood at a distance.

Meanwhile, speaking exclusively to 6abc Action News, Commissioner Ross said he stands by the officers who made the arrest saying they were simply following procedure.

"Unless someone comes forward with something more than I know now, it doesn't appear that they did anything wrong at all. In fact, they were really trying not to make an arrest in this case," Ross said.

On Sunday, the demonstrations began around noon when protesters showed up holding signs and shouting messages of anger outside the coffee shop.

Among the demonstrators was Melissa DePino, who captured the video of the arrest being passed around on social media.

Leaders from several organizations attended Sunday's protest at the store, demanding that the manager be fired and thanking the customers in the store who interjected during the arrests.

"They spoke up for those two black men. They put their bodies on the line," said Asa Khalif. "They spoke up and they challenged the police and they filmed. This is what allies do."

After their arrests, the two men were released early Friday morning.