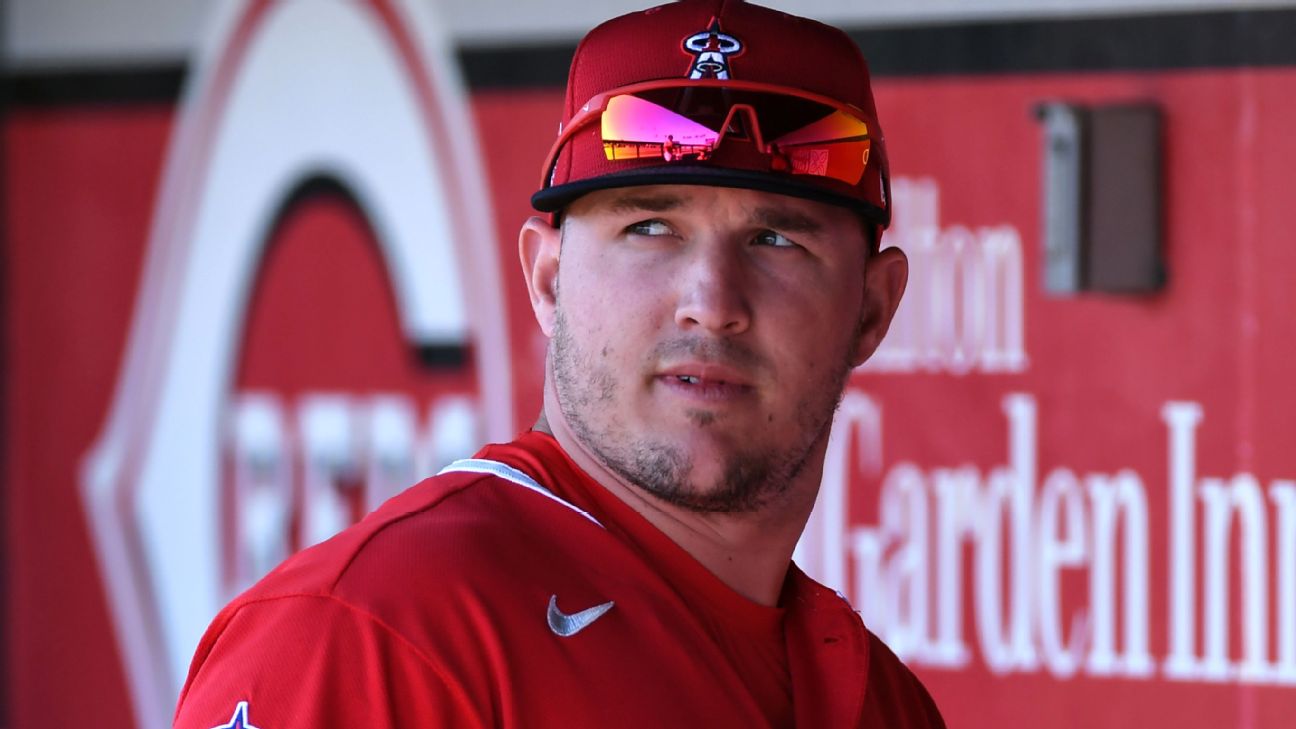 In the shortened Major League Baseball season that's on tap for 2020, which players' top-tier performances will define the year for baseball?

We asked a panel of 32 experts from ESPN's MLB coverage team to name the star players they think will deliver seasons that merit recognition as baseball's MVPs, Cy Young Award winners and Rookies of the Year for both the American and National Leagues.


What we got back might surprise you. Our voters didn't pick a repeat winner for either Cy Young, and nobody came close to getting a majority for either MVP award. Which suggests we may see equally split-up voting at the end of the year, so embrace the chaos to come. And despite the presence of an obvious favorite in each league, the votes for Rookie of the Year were far from unanimous.

To help explain what individual experts thought in making their selections, we asked our voters for their reasons why particular players got their votes. Here are our predictions for MLB's major awards.

To see who our experts think will walk away with the title at the end of the 2020 season, check out our team predictions.

Jump to predictions for: Cy Young | Rookie of the Year

Why did you vote for Bregman?

If this weren't a 60-game season, and Trout's wife weren't due with their first-born child in August, the answer would be Trout. But every game missed in this shortened season matters, and Bregman hits in the middle of arguably the best lineup in baseball, was the best player in all of baseball in the second half last season and wants to prove his excellence extends well beyond the Astros' past cheating. -- Jeff Passan

You went with Donaldson, what's the argument there?

A guy who seems to have a couple of stretches when nobody can get him out every season and now only has to stay healthy for two months is very intriguing in a 60-game season. Throw in the fact that he's moving from an ace-filled NL East to an AL Central in which he gets to face the Royals and Tigers in one-third of his games while joining a lineup that set the MLB record for home runs and this could be a monster year for the Twins' big offseason addition. -- Dan Mullen

And you voted for Chapman, what gives?

I looked back at how weird MVP voting has gotten in some of MLB's previous shorter or shortened seasons. In strike-shortened 1981, Rollie Fingers over Rickey Henderson was bizarre (and mistaken); in 1995, Mo Vaughn beating out Albert Belle and Edgar Martinez -- with Jose Mesa getting a first-place vote! -- looks even kookier in retrospect. I expect some similarly fractured balloting and a lack of consensus among the voters with just 60 games to go on, so in picking the A's to win the AL West, I'm thinking a narrow majority of voters credit Chapman for his game-breaking defense while raking against a limited slate of opposing rotations in his age-27 season. -- Christina Kahrl

Why pick Tatis for NL MVP?


Tatis was fourth in the National League in WAR per game last year -- behind the top three MVP finishers -- and even a little growth from his age-20 season would put him near Trout levels in a full season. Often, MVP cases aren't just about WAR, or even about greatness, but about how obvious and how fun it is to talk about that greatness. Tatis is young, ascendent and the perfect highlight player, capable of demanding our attention with a different skill every night. We'll be talking about him constantly, so it's inevitable he'll end up in the MVP conversation. -- Sam Miller

Why did you vote forAcuña?

The 2018 NL Rookie of the Year, Acuña is still just 22 years old and finished fifth in the 2019 National League MVP voting. Acuña was three stolen bases short of becoming the fifth player in MLB history to have a 40/40 season, hitting 41 homers and stealing 37 bags in his first full big league season. Having to face pitchers in the NL East and AL East will be really tough, but the Venezuelan-born outfielder was my pick over a 162-game season, and I can't wait to see what he can do in a 60-game season if he manages to remain healthy.-- Marly Rivera

You went with Yelich, the reason being ... ?

Yelich has simply become a sure thing in the NL, and with so much uncertainty surrounding a 60-game season, sure things are a valuable commodity. Over the past nine months of regular-season baseball, Yelich hasn't had an OPS under .935 in any of them. Enough said. --Jesse Rogers

Why Cole? Is he just the obvious choice?

It's obvious, but for good reason. Cole is pitching in front of the strongest lineup in the league, and a sixth of his team's schedule is against the Orioles. Throw in an ungood Blue Jays team potentially spending all season on the road and maybe a start against the Marlins, and I guess I'm anticipating the former Astros ace making a dominating first impression on Yankees fans ensconced on their sofas, and maybe getting a shot at making history with a 20-K start. -- ChristinaKahrl

Why did you vote for Glasnow?

Glasnow has always had Cy Young stuff, but control issues and injuries have slowed his progression to deliver on that potential. He seemed to put the control issues behind him in 2019, but made just 12 starts because of a right forearm strain. Twelve starts in 2020 will probably lead MLB, and if Glasnow just repeats his dominant 2019, he'll be a lock to bring home the AL hardware. -- Michael Bonzagni

Why did you vote for Clevinger?

Keeping Clevinger healthy has been a problem, and perhaps the unfortunate theme only continues in a truncated season, but if one extrapolates the numbers few starting pitchers can match this fiery right-hander. Clevinger prevents home runs and runs overall. He misses an ample number of bats. Give him 10 starts this season, a little luck in the wins department and watch the magic happen. -- Eric Karabell

Why did you vote Scherzer?

Scherzer missed about a month last season and still managed to finish third in Cy Young voting and strike out 243 batters, his eighth consecutive 200-K season -- which is one shy of Tom Seaver's MLB record. The extra time to recover from last year's World Series run combined with Scherzer's consistency and trademark tenacity in a short season make him the logical NL pick. -- Michael Bonzagni


Why did you go with Buehler?

Call me an optimist for anticipating further growth, but Buehler's improvements last season -- boosting his strikeout rate and tightening up already remarkable control -- while showing he could handle a full-season workload suggest to me that he could be on the cusp of barging in among deGrom, Scherzer, Strasburg and teammate Clayton Kershaw in the front rank of NL starters. He'll get the run support, and if the ball is relatively dead this season he could run off short-season dominance like a latter-day Orel Hershiser. -- Christina Kahrl

Why did you go with Hader, a reliever?

In a season in which conventional baseball wisdom will be completely thrown out the window, the circumstances are aligning for a reliever to win the Cy Young Award for the first time since Dodgers closer Eric Gagne did it back in 2003. The shortened season means the leash for starters will be shorter than ever before, and the importance of lockdown relievers will be greater than ever.

Which brings us to Hader, the Swiss Army knife of the Milwaukee Brewers. With a starting rotation devoid of a traditional ace, Milwaukee's entire pitching strategy revolves around its lefty reliever, who has thrown 157 innings over the past two seasons with a 2.52 ERA, 169 ERA+, 1.08 WHIP and 16.1 K/9. Given the circumstances of the Brewers' rotation, Hader will be put in a position to put up monster numbers in the most unusual of seasons. If no starter completely separates himself from the pack, expect the league's top relievers to be in the discussion for the Cy Young. -- Joon Lee

Rookie of the Year

Why did you go with Robert?

The tools are goofy, the summer camp buzz is strong, and he'll be starting every day for the whole year. There should be some growing pains against the best pitching on the planet, but the raw talent will be enough to put up some eye-popping numbers. -- Kiley McDaniel

Why did you pick Jesus Luzardo?

If not for injuries, I think Luzardo might've won this award last year, with the main concern being an innings cap, something that is no longer an issue in a 60-game season. He has a brilliant quartet of pitches: high-90s fastball, sinker, changeup and curveball, all of them of good quality. -- Tristan Cockcroft

Why did you pick Lux?

There's a reason the Dodgers basically refused to include Lux in prior deals for decorated veterans -- they view him as a superstar in the making, with an advanced feel for hitting that should already translate to the major league level. Lux, 22, began last season in Double-A and finished it as the starting second baseman for a Dodgers team that dominated the summer. He had his highs and lows, ultimately batting .240/.305/.400 in September, but that experience will help him in 2020. -- Alden Gonzalez

Why did you go with Carter Kieboom?