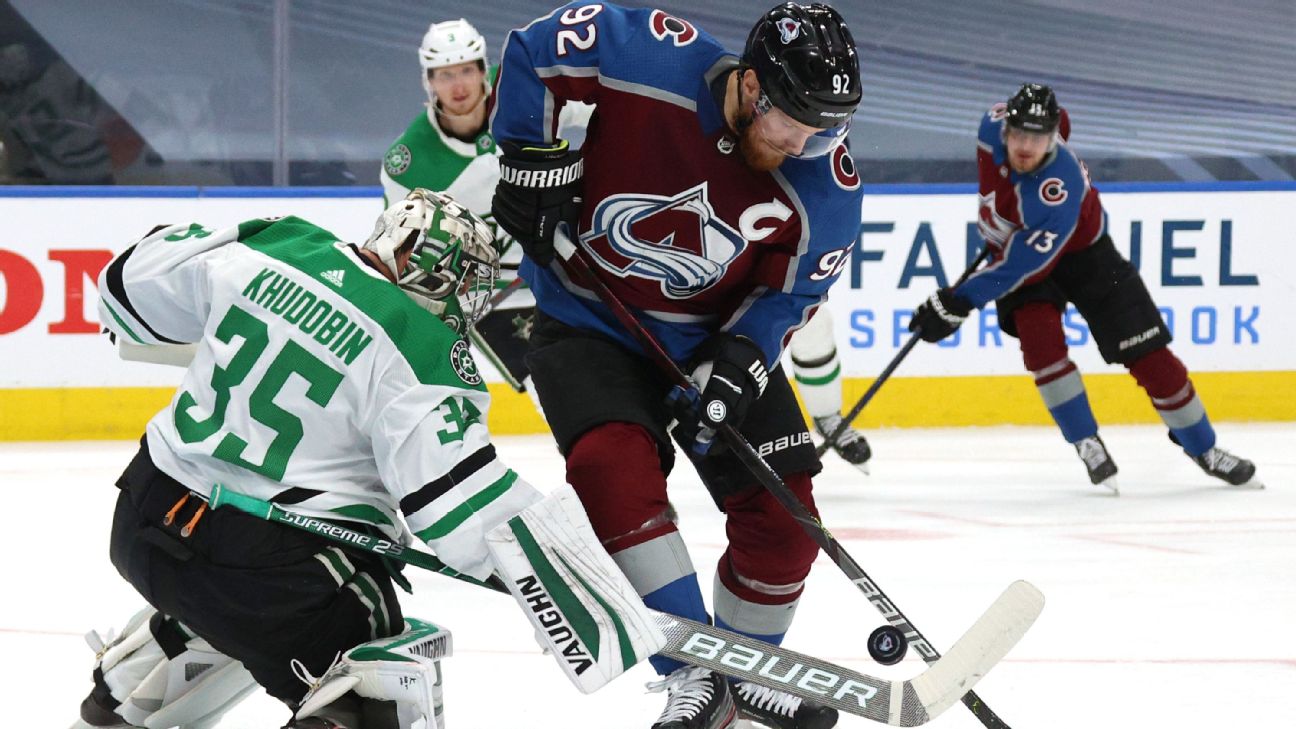 Only one game on the docket for tonight, but if it is like every other game in this series, expect some high-scoring action from the Dallas Stars and the Colorado Avalanche. A popular pick to win the Stanley Cup, the Avalanche will be fighting for their playoff lives in Game 6 while the Stars look to be the first Western team to clinch a spot in the conference finals.

Tuesday night, the Philadelphia Flyers won a thriller over the New York Islanders to force a Game 6, and a pair of Flyers broke a pair of scoring droughts. The Vegas Golden Knights threw everything except the kitchen sink at the Vancouver Canucks, but the Canucks came away with a tight 2-1 win. Could we be looking at a pair of 3-1 comebacks?

We're used to the Stars scoring in bunches, but in Game 5, it was the Avalanche who blitzed Dallas for five goals in the first period en route to a 6-3 win. The million dollar decision for the Stars is who will get the start in net, Ben Bishop or Anton Khudobin? Bishop started Game 5, his first start since Aug. 13, and gave up the first four goals before being pulled. Khudobin had started in Bishop's absence, but has been shaky with a 3.54 goals-against average against the Avalanche so far.

Question of the day: Who's more likely to win their series, the Avalanche, Canucks or the Flyers?

Each of these teams faced a 3-1 deficit before forcing a Game 6. The argument for the Avalanche is that their top line could be the best in the league when they're hot, and Nathan MacKinnon is playing like the best player in the world recently. The argument against them is that their uncertain goalie situation is undermining their dynamic scoring.

The argument for the Canucks is that they too have some elite forwards, and Quinn Hughes is a star on their blue line. The argument against them is that they need hot, or lucky, goaltending to make it through the onslaught of shots from the Golden Knights.

The Flyers are the No. 1 seed in the East, but they have been stymied at times by the tough Islanders defense. They have an edge on the two aforementioned teams with Carter Hart in net, but they need more consistent scoring. Kevin Hayes and Jakub Voracek have been strong for the Flyers so far, but they will need to see how Sean Couturier feels after being injured in Game 5. Claude Giroux scoring a goal could be a turning point for him. Their problem is contending the Islanders' defensive style, which has held the Flyers to 2.2 goals per game; another issue is holding on to leads, especially late.

Stars and Avalanche over six goals (-110). In addition to the aforementioned goalie concerns for each team, they have combined for 61 penalties combined this series, by far the most penalized pair of teams remaining. The Stars have cashed in 35% of their power-play opportunities, and you can pencil in at least one goal from the Avs' top line.

No one was more tired hearing about Claude Giroux's goalless streak than the Flyers captain himself, but he finally broke through with his first playoff goal since 2018 to open the scoring for Philadelphia. Two and a half minutes later, James van Riemsdyk snapped his own drought with a goal off the rush, his first point of the playoffs. With under five minutes to go, the lead slipped away for the Flyers, as the Islanders answered back with two goals in a 93 second span to tie it up.


While goalie Carter Hart would have loved to have those goals back, a deflection from the point and a chip-in in front, he remained under siege in overtime, facing seven shots from the Islanders within the first five minutes. "We had a couple of chances in overtime, [Hart had] big saves in key moments, that turns out to be the difference," said Brock Nelson after the game. After an unnecessary icing by the Islanders, Ivan Provorov fired a laser from the blue line which took a deflection from Scott Laughton and found the back of the net. Each team would lose a key contributor during the game, with Sean Couturier exiting with an undisclosed lower-body injury and Mathew Barzal suffering a high stick around the eyes from Giroux. We expect to hear more on their status as we get closer to Game 6 on Thursday.Full recap.

With their backs against the wall and their starting goalie unfit to play, the Canucks turned to Thatcher Demko to make his first career playoff start in an elimination game. Demko responded with the performance of his life, as the Canucks were outshot 44-18 but came away with a series-saving win to force Game 6. Golden Knights defenseman Shea Theodore opened the scoring with a second period goal by skating through nearly the entire Canucks defense and extending his point streak to seven games. It took just 23 seconds for Brock Boeser to respond, scoring with assists from Quinn Hughes and J.T. Miller. Hughes' assist set the record for most playoff assists by a rookie defenseman in NHL history (13).

Boeser's goal was the first of two that came from a reunited line of Boeser, Miller and Elias Pettersson, a change head coach Travis Green made after a scoreless first period. "We have good chemistry with each other, it was good that we switched up the lines, because the first period wasn't good from our side. Coach made some changes, and it worked out," said Pettersson. For the Golden Knights, Robin Lehner got the start and took the hard-luck loss, making key saves, but giving up two goals on deflections. Vegas had a 65% Corsi for percentage, and 10-4 edge in high-danger scoring chances, according to Natural Stat Trick. "It's never easy to close anybody out, and they found a way to win a game between some good goaltending and opportunistic goals," said Vegas coach Pete DeBoer after the game. Full recap.

The Flyers captain snapped his 14 game goal drought and contributed an assist on the game-winning goal in OT. This was Giroux's 83rd career postseason game, and the Flyers are 17-4 when he scores a goal. Giroux has 18 points in 18 career games in which the Flyers are facing elimination, which will be the case for the next two games.

The 24-year-old rookie didn't find out he would be making his first career playoff start until the night before. Demko logged 43 saves against the top-seeded Golden Knights, who were looking to close out the series. Fun fact, he became the first rookie netminder to win his playoff debut in an elimination game since Jose Theodore did so in 1997. Granted, it's kind of rare for a goalie to make his debut while facing elimination, but this has been an unusual playoff round for Western Conference goaltenders, so it fits.

Boeser has been productive for the Canucks, but the goals have been hard to come by. Boeser scored a goal, had an assist on Elias Pettersson's goal, and had a personal playoff-high five shots in Game 5. "It's something I haven't been doing as much lately, and it really jumps my game when I start shooting the puck more, I feel better throughout the game," Boeser said afterwards.

Stat of the day

J.T. Miller has now assisted on the Canucks' last six goals, a streak that ties an NHL record.

Social media post(s) of the day

Isles get on the board first.

The Flyers answer back.

And pile on a couple more goals.

The feelings of abject disappointment upon an OT loss in the playoffs are real, even from home.

Fashion choice of the day

Controversy of the day

With nine minutes left in OT, Carter Hart grabs the puck behind the net and freezes it in his glove, without immediate pressure, in what could have been called a delay of game penalty. The referee appears to give Hart a warning after the play, but does not call a penalty.

Obviously, there's no way to know if the outcome of the game would have been different, but three minutes later, the Flyers scored the game-winning goal.

Asked about it after the game, Hart said, "I was just trying to knock the puck down off the glass there. I didn't even notice it bounced right in my glove. So, I didn't know what to do. I just quickly sprinted back to my crease and then got a warning." 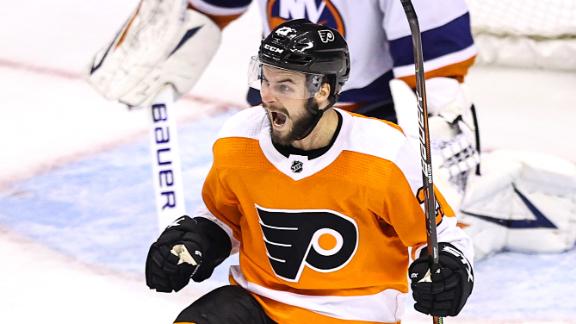 Flyers avoid elimination on Laughton's OT goal
Scott Laughton's goal in overtime keeps the Flyers alive for another game as they beat the Islanders 4-3 in Game 5. 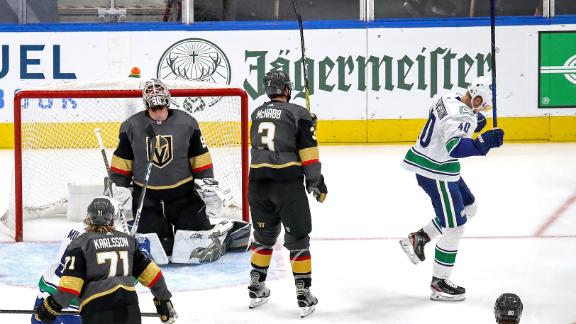