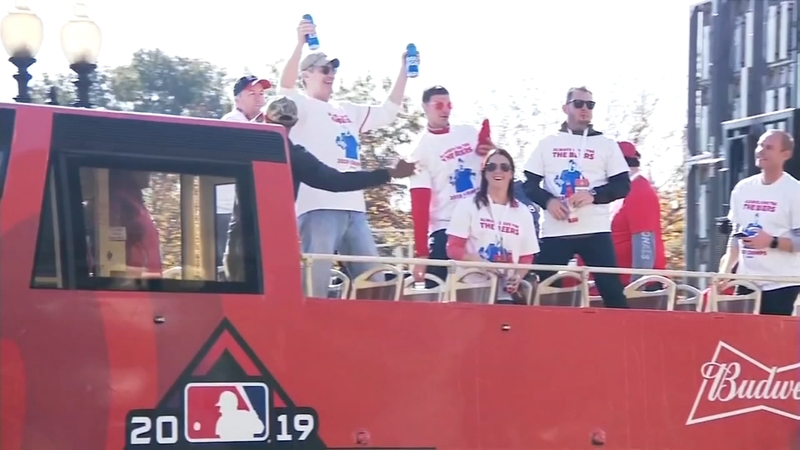 HOUSTON, Texas (WPVI) -- Jeff Adams, the Washington Nationals fan who took a home run to his chest during the World Series, was seen on a parade float on Saturday in Washington, D.C.

The viral moment happened Sunday, during Game 5 when Houston Astros' Yordan Alvarez hit a 2-home run during the second inning. The ball went flying out into the stands where it hit the Washington Nationals fan who had his hands full with the two cans of Bud Light.

President Trump booed during Game 4 of the World Series on October 27, 2019.

The moment spread like fire over social media and it did not take long before the Bud Light posted about it.

"This man is a hero. Twitter please figure out who this guy is so we can reward him," Bud Light said in a tweet.

This man is a hero. Twitter please figure out who this guy is so we can reward him. #WorldSeries pic.twitter.com/suMtVECfXY

Update: We are in contact with our hero. He’s wearing this beauty to Game 6. pic.twitter.com/CobFG9q8kC

Bud Light made Adams a custom shirt, and he even starred in two commercials.