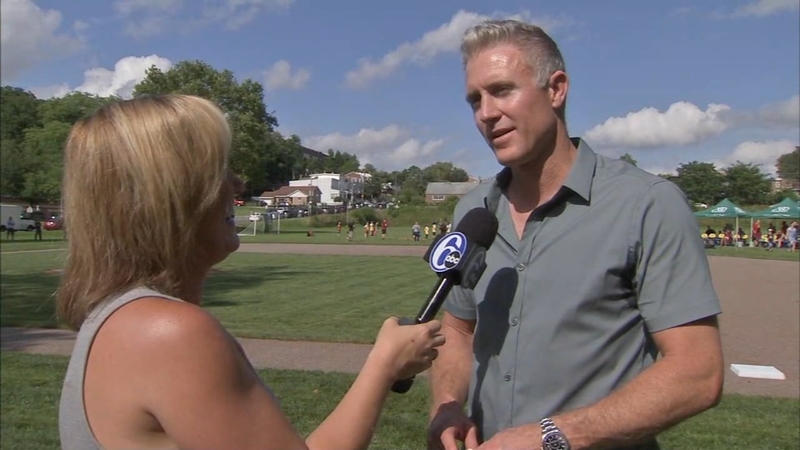 Utley served on a blue-ribbon panel that selected park makeovers for communities in need.

"As a father, I know first-hand how vital it is to have a safe place for kids to play ball in their communities," Utley said in a statement last month. "I'm proud to partner with Scotts and support their Field Refurbishment Program, and provide the girls and boys in Allentown, Chicago, Mount Vernon and Wewoka spaces where they can learn the game while having fun. Baseball gave so much to me, and I hope that through this program, we can have a positive impact on the lives of children."

He led a youth baseball and softball clinic at the park on West Union Street, following the ceremony.

Major League Baseball said middle school, high school and RBI teams, among other youth leagues, all play baseball on the Allentown field, but many home games turn into road games due to poor field conditions.

"Once refurbished by Scotts, teams, and leagues can return to a normal schedule and the community will look to increase the amount of events held on the field. That includes hosting youth tournaments, Jr. Home Run Derby competitions and MLB Pitch, Hit & Run competition. The Allentown School District and Lehigh Valley RBI also plan to schedule camps and clinics on the refurbished field to introduce baseball to youth in the area who have never or rarely played," the MLB said.
The grant is sponsored by MLB and the Scotts Company.

Action News sports anchor, Jamie Apody got a chance to spend some time with Utley on Thursday.

"Man was it great to see 'The Man' again. Chase Utley greeted me with a friendly 'Jamie!' and a hug, the first time we've seen each other in a couple of years," says Jamie. "Friday night, he'll officially retire with the Phillies, and he asked me if that makes him 'old.' We pretty much both agreed that it does."

Jimmy Rollins retired with the team earlier this season.

Ryan Howard is the next to do so later this summer.

So begins the next chapter for Utley. He's living in Los Angeles with his wife and two young boys who are seven and four. Jamie asked Utley if he wants to try and catch her and have a third child?

He said, "Two is crazy enough."