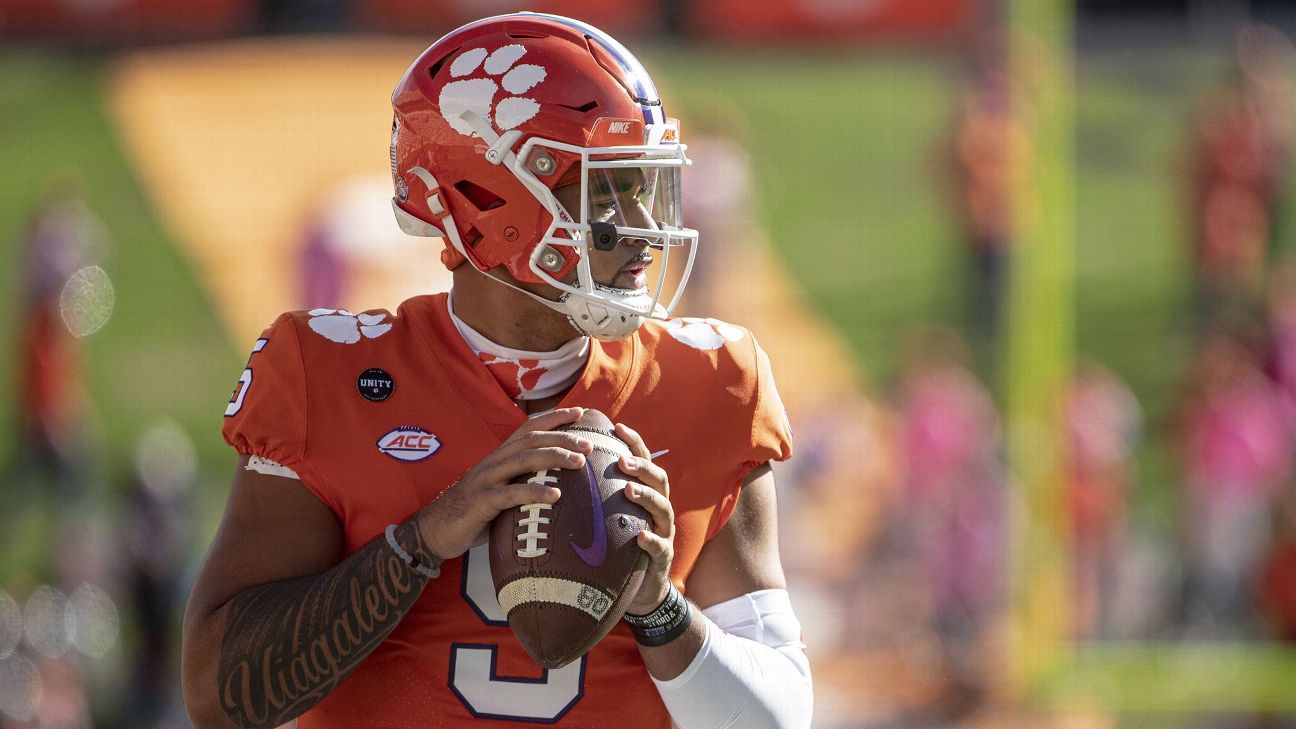 With the calendar turning to July, it's officially time to forecast what the college football season will hold for fan bases around the country.

After the most abnormal season in recent history, fans will be treated to a return to normalcy with tailgating, full stadiums and all the traditions that make the sport unique. The early season slate showcases plenty of big games with high stakes, while several of the future superstars of college football will be able to break out on the big stage immediately.


Week 1 is less than two months away so what are the must-watch games in September? And who are the players, both those primed for the national spotlight and incoming freshmen ready to make a name for themselves, to know ahead of fall camp?

A team of our writers has you covered while we patiently wait for the season to begin.

Which September game are you most excited about?

David Hale: Clemson and Georgia is the perfect September football game. It's an established title contender in Clemson vs. the trendy pick for 2021 in Georgia. It's a matchup of big-armed QBs from Southern California. It's two teams that have recruited at the highest level for years. And rather than a one-off spectacle, this is a matchup that actually has history on its side, too, with UGA and Clemson playing 64 times in the past, with the last matchup in 2014 including Deshaun Watson's awe-inspiriting first TD throw and an absolute huge performance from Bulldogs' superstar Todd Gurley on the ground. This is as good an opening weekend showdown as we've had in college football in a long time.

Adam Rittenberg: Other than Clemson-Georgia, I'm really excited to see Oregon and Ohio State meet at a packed Ohio Stadium in Week 2. The cancellation of last year's game in Eugene was a bummer, but the defending Pac-12 (two-time) and Big Ten (four-time) champions will finally share the field in Columbus. Both teams have eyes on the CFP. Oregon's defense should be among the nation's best, as end Kayvon Thibodeaux will be chasing a new Ohio State quarterback (probably C.J. Stroud), and the Ducks' secondary will be chasing Chris Olave, Garrett Wilson and possibly the nation's top receiving corps. The Pac-12 really needs this one, but so does Ohio State. Ryan Day still hasn't lost a regular-season game as Buckeyes coach.

Tom VanHaaren: I agree with Hale and Rittenberg, those two games are going to be fun. I would throw in Notre Dame and Florida State. It's a Sunday game in prime time on ABC and it's two teams in very different stages with different goals. Notre Dame is hoping to get off to a fast start and propel itself into a College Football Playoff spot and Florida State is trying to rebuild and get back on track. Seminoles offensive coordinator Kenny Dillingham told ESPN that he feels way more confident coming into this season than last, mainly because of the preparation and practice they've been able to get in compared to the interrupted season in 2020. The staff has brought in some important transfers and are hoping those moves will translate on the field this season. I'm excited to watch it to see where both teams are at and what kind of progress each has made as we start the season.

Dave Wilson: D'Eriq King and Bryce Young will be the focus of much intrigue on how far they can take Miami and Alabama this season. Will Miami take a step this season back to becoming Miami? Will Alabama still be Alabama? Right out of the gate, we'll get to see how they both look on Sept. 4. Honorable halftime mention: I'm also unreasonably excited to see what kind of shenanigans theRiceMarching Owl Band unleashes in its first visit toTexasin 10 years on Sept. 18, after spelling out $EC on Texas' field in its last visit in 2011, when Texas A&M was departing the Big 12.


Bill Connelly: Two of the teams I'm most curious about this year are Penn State and Wisconsin, and how they look. They play at noon on the first Saturday of the season. The Nittany Lions and Badgers haven't met since the 2016 Big Ten Championship, and they both bring loads of obvious upside and 2020-related question marks to the table. Does Wisconsin have a go-to running back after last year's struggles? Does it really matter that Paul Chryst is taking over playcalling again? Does new Penn State offensive coordinator Mike Yurcich bring the spark back to the Nittany Lions' offense? Can a rebuilt PSU defensive line hold up against Wisconsin's maulers? We'll have some partial answers, at least, by midday Saturday No. 1.

Who will become a breakout star in 2021?

Alex Scarborough: It's understandable if you missed Kayshon Boutte's late arrival last season. LSU was struggling to get to .500 at the time the former four-star prospect really started to show what he was capable of. Without Ja'Marr Chase and Terrace Marshall, Boutte emerged as the Tigers' go-to playmaker on offense -- a true burner and downfield threat. If he can do even half as well as he did in the final three games last season, when he had a combined 527 yards and four touchdowns against Alabama, Florida and Ole Miss, then he could find himself in the conversation for the top receivers in college football.

Hale: The easy answer here is Clemson QB D.J. Uiagalelei, who gave us a taste of what he's capable of when he set the record for most passing yards by an opponent against Notre Dame in just his second career start last season. Now he takes over full time for Trevor Lawrence, and his combination of a big arm and a big personality make him ripe for stardom. Number two on the list of breakout stars is probably Alabama QB Bryce Young, which sets up nicely since Young and Uiagalelei, who were rivals in high school in Southern California and entered college together as two of the most highly touted recruits in the nation. It all sets up quite nicely for a storyline we'll be buzzing about for the next couple years.

Chris Low: If he were playing at Alabama, Ohio State or Clemson, Malik Willis would be one of the preseason favorites to win the Heisman Trophy. Well, he's playing at Liberty and will be one of college football's must-see players in 2021, especially with another year of development under coach Hugh Freeze. Everywhere he's been, Freeze has been able to get maximum production out of his quarterback, and the 6-foot-1, 215-pound Willis is Freeze's most talented and most versatile QB yet. A year ago, Willis rushed for 944 yards and 14 touchdowns, and opposing defenses simply couldn't get him on the ground. He also passed for 2,260 yards and 20 touchdowns. And even though he only threw six interceptions in 2020, he'll be even more polished and more decisive as a passer this season. Willis and Liberty both will be worth the price of admission in 2021.

VanHaaren: I like Boutte, Uiagalelei and Young for this, too. I would add in Texasrunning back Bijan Robinson as a candidate. Robinson averaged 8.6 yards per carry last season as a freshman on only 86 carries. His load is likely going to increase with Steve Sarkisian as the coach and Robinson is an explosive play waiting to happen. He had 2,235 rushing yards with 38 touchdowns in his senior year of high school. You read that right, that was one season. From his sophomore season to his senior season, Robinson had 6,658 yards and 99 touchdowns. He's an exciting player and in this new offense, he should shine.

Wilson: Agree with TVH on Bijan, who has potential as a one-cut-and-go back with his speed if the Longhorns' offensive line can improve. Robinson's counterpart at Texas A&M, Devon Achane, had a very similar trajectory last season, getting just 43 carries all season (Robinson had 86) before being named the Orange Bowl MVP after rushing for 140 yards and two TDs, including a 76-yarder. He spent the offseason running track for the Aggies, including a 20.31 200 in just his second meet that ranked among the fastest collegiate times in the country this year. The Aggies have stars in Isaiah Spiller and Ainias Smith, but Achane, who now averages 8.5 yards per carry during his Aggies career, will force Jimbo Fisher to get creative.

True freshman you're most excited to see?

Scarborough: Alabama's spring game was a wake-up call for anyone sleeping on Agiye Hall, ESPN's No. 3-rated receiver in the Class of 2021. The Florida native came out against the first-team defense and caught everything within a one-block radius of his No. 17 jersey. It didn't matter if it was a contested catch -- he'd leap and contort his body and get his hands on the football. At 6-3 with excellent speed, Hall looked like the heir apparent to departed star receivers DeVonta Smith, Jaylen Waddle and Jerry Jeudy, and the perfect downfield threat to compliment returning star John Metchie.

VanHaaren: There are so many to choose from in this class and one of the more interesting prospects on this list is Clemson running back Will Shipley, who could make an immediate impact for the Tigers. He'll make the loss of Travis Etienne a little easier to swallow as Shipley is lightning in a bottle. He ran a 6.36 in the 55-meter dash his junior season and had a 4.46 laser time 40-yard dash time before getting to Clemson. He's not just a track guy playing football, he is a football player who can run track and he's going to be fun to watch. The other name I'd throw in is Ohio State running back TreVeyon Henderson. He was the No. 1 running back in the class and didn't play his senior season of high school. Instead, he used the time to train and prepare for college, which paid off as he now looks like he's been in a college strength program for three years. The Buckeyes will need Henderson this season and he has the talent to be a breakout player this season.

Low: Explosive receivers and Oklahoma have become synonymous under Lincoln Riley. Marvin Mims returns after a sensational freshman season, and now it's Mario Williams' time to shine. He doesn't have great size (5-9, 181 pounds), but is exceptionally quick, electric after the catch and versatile. He also was a star baseball player in high school. Oklahoma quarterback Spencer Rattler said in the spring that Williams was one of the fastest guys on the team, adept at getting open and "could do it all." Sounds like Mims won't be the only big-play receiver Rattler will be looking to get the ball to this fall.

Rittenberg: USC's defense made noticeable strides in 2020 under first-year coordinator Todd Orlando, whose risk-reward scheme yielded 16 takeaways in only six games. But the Trojans are still seeking their first CFP appearance, and, to do so, must continue the improvement on defense. Korey Foreman's arrival should help. Foreman, ESPN's No. 3 overall recruit in the 2021 class, stayed home to give USC an impact pass rusher from Day 1. Although he didn't go through spring practice with his new team, he should find a role right away as a complement to Drake Jackson up front.

Connelly: I'm trying to contain my skepticism about Washington offensive coordinator John Donovan -- his system's conservatism and predictability -- but he's got ridiculously experienced and talented personnel at his disposal, and there's at least a chance that star freshman Sam Huard, the most anticipated UW signee in forever, is ready to run the show from Day 1. He's got major competition for the job and might have to wait his turn, but he's a young, fast and accurate passer, and his upside will determine just how high UW's ceiling is in the coming years. 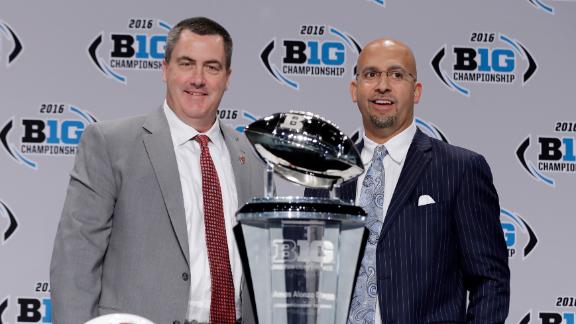