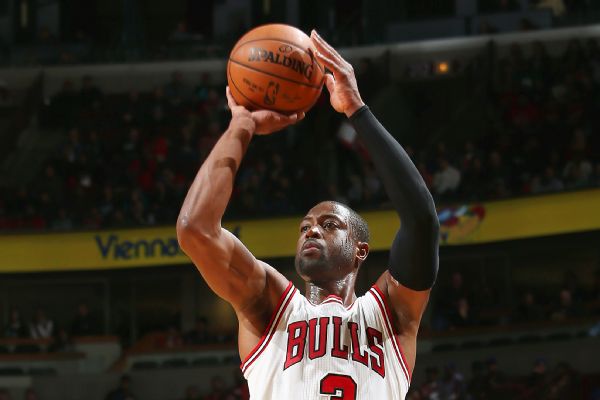 CHICAGO -- Dwyane Wade still doesn't think a lot of people understand why he left the Miami Heat after 13 seasons and three championships to sign with the Chicago Bulls over the summer.

"If you're not in this business, it's hard to understand," Wade said Monday, three nights before his first game against the Heat since his departure. "But I don't even want them to understand -- I want them to appreciate what we accomplished together. I want them to cheer for their team that they have, support those players over there that's giving their all. Support the future of the organization and be thankful that we all was able to experience an unbelievable ride together. That's all you can do."

Wade surprised many around the league by opting to sign with Chicago on a two-year deal for $47 million -- which includes a player option -- after contract talks stalled with Heat president Pat Riley.

Since signing with the Bulls in July, Wade, a native of Robbins, Illinois, has played up the homecoming angle, but many around the league felt that he was just trying to stick it to Riley for not being active enough during the free-agency process and that Chicago provided the best landing spot.

Wade acknowledged how much he is anticipating playing against his old home fans Thursday night.

"Even coming off a back-to-back [Bulls play against the Atlanta Hawks on Wednesday night], if my team don't have energy for that night, [it's] going to be a problem," Wade said. "I expect us to come in and give whatever we have. Go out there, and I want everyone to enjoy the environment, enjoy the moment. It's going to be a great environment to play in. I want our team, early in the season, to experience that kind of environment and try to seize it."

Wade is hopeful he will be cheered by many at American Airlines Arena, but he isn't sure exactly how the reception will be.

"You never know," he said. "You never know how you're going to be received. But I did everything possibly right in my time there. So hopefully I'm received [for] what I've given to the franchise, organization. But at the same time you never know. You might hear a boo or something at some point. Everybody don't like you. You got to understand that. But I think overall it will be positive."

Wade said he wasn't sure if he would get goosebumps or shed a tear, but he knows Thursday will be an emotional night for him.

"I think I'll definitely be appreciative of the moment," he said. "I think it's going to be cool just to see familiar faces. I think it's going to be cool to see love and support and [people] just being thankful for what you did. Unless you're just cold-blooded, everybody's going to feel something with that. At the same time, it's not like my retirement ceremony where I can get a chance to get real emotional. I'm trying to come in there and beat their butt. And they're going to try and beat our butt, so we got to get to the competitive part of the game as well."

Wade said he still keeps an eye on how the Heat are doing. He wants his former teammates to succeed, just not when he is playing against them.

"I definitely watch when I get an opportunity to watch them play," Wade said. "One, because it's a lot of my young guys over there. I want to see them succeed. I want to see Tyler [Johnson] and Justise [Winslow] and all those guys take that next step. I want to see howHassan [Whiteside] is going to respond to everyone saying this and that about him since he got paid. So I watch that as someone who knows them, then I watch the game as a fan and I watch it as a competitor. I watch it so many different ways.

Wade sounded truly appreciative of how fans embraced him during his time in Miami. It should make for one of the most interesting scenes in the NBA this year when he is introduced for the first time as a Bull in Miami.