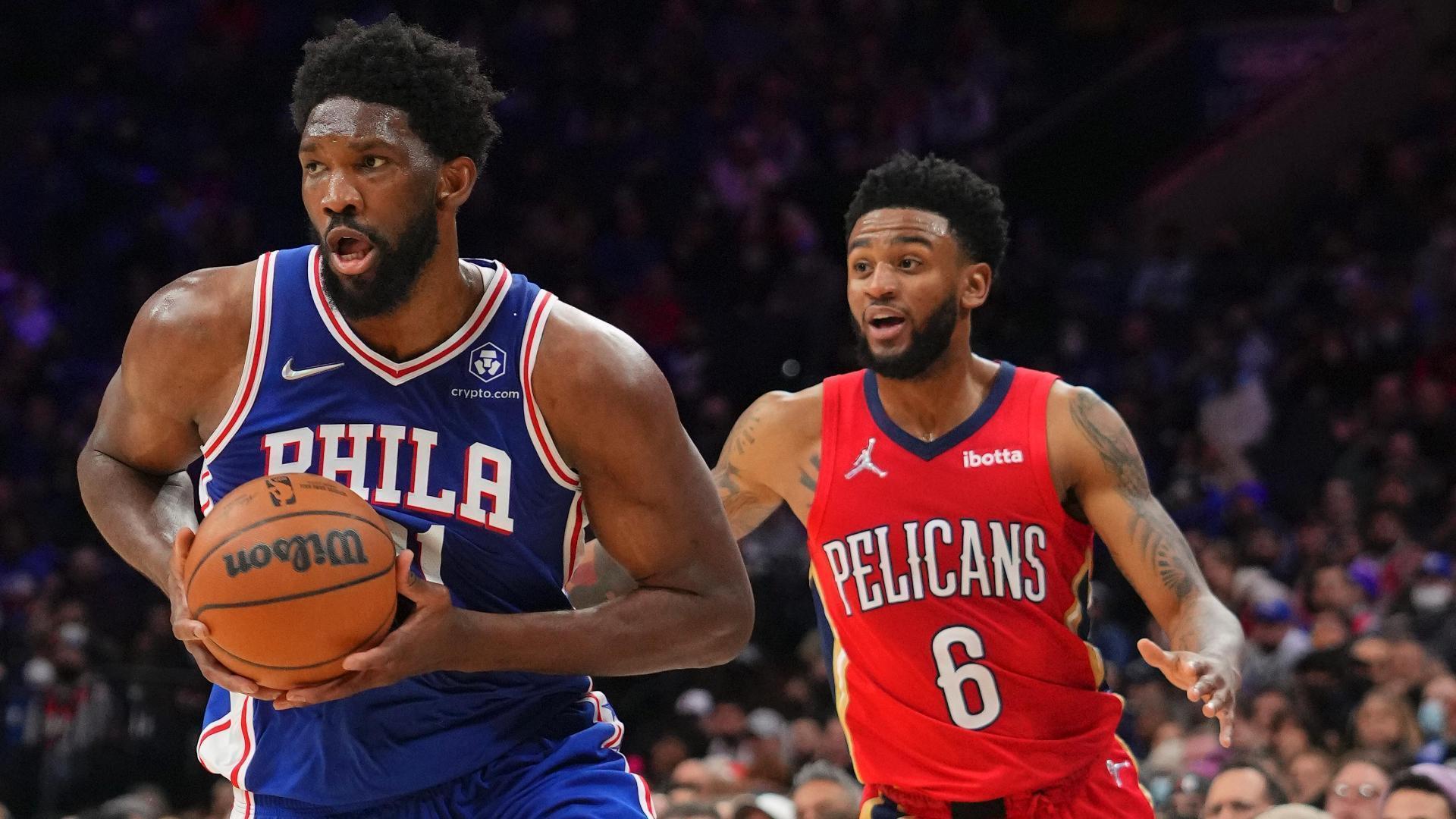 Embiid scored 12 of his 42 points in the fourth quarter as the Philadelphia 76ers pulled away from the short-handed New Orleans Pelicans for a 117-107 win on Tuesday night.


Tobias Harris added 33 points for the 76ers, who opened a five-game homestand by winning the 12th of their last 15.

"His dominance is huge for us," Harris said of Embiid.

Embiid, who finished runner-up in the MVP voting last season, continues to make a push for the award. In the past, Embiid might have rested in games like Tuesday's against a Pelicans team decimated by injury. But the Philadelphia star recently said the criticism of him missing games - he played in 51 games in each of the last two seasons - caused him to change his diet and mindset in order to play in every game.

Tuesday was his 19th straight game. Philadelphia is 13-6 over that stretch and Embiid is averaging 33.3 points.

"That was one of my goals, just to be available," Embiid said. "Don't plan on stopping."

And the 76ers really needed Embiid against a gritty bunch of Pelicans backups.

In addition to Zion Williamson, who has been out all season while rehabbing his injured foot, the Pelicans were missing starters Devonte' Graham (left ankle soreness), Josh Hart (left ankle), Brandon Ingram (right ankle sprain) and Jonas Valenciunas (rest).

Nickeil Alexander-Walker scored 31 points and Willy Hernangómez had 29 for the Pelicans.

"No moral victories, but we all are extremely proud of what our group did," New Orleans coach Willie Green said.

After an impressive first half in which they twice had leads of 10 points, the Pelicans kept it close through most of the second half.


But Embiid took over during crunch time in the fourth.

The Sixers were clinging to a 97-95 lead when he re-entered with 7:40 remaining. Harris converted a free throw, finishing a three-point play, to make it 98-95. Then Embiid scored all of Philadelphia's points during a decisive 10-3 run. His two free throws with 4:03 to play made it 108-98.

That was too much for the Pelicans to overcome.

Embiid's mentality in the fourth?

New Orleans surprisingly jumped on the 76ers early and kept the momentum throughout an impressive first half. The Pelicans' lead was 33-23 after Gary Clark's 3 with 9:12 left in the half and reached 10 again on Alexander-Walker's 3 with 1:29 remaining. New Orleans was ahead 58-50 at the break.

The 76ers - and Embiid, especially - made it tougher after the break.

"Just being aggressive," he said, "because in the first half everything was easy for them."

Green returned to Philadelphia as an NBA head coach for the first time since his playing days as a member of the 76ers. The first-year Pelicans coach averaged 9.4 points in seven seasons in Philadelphia from 2003-10.


"This city, this organization is part of what raised me in the NBA and I'm grateful to have started my career here," Green said. "Walking through these doors brings back so many memories, great times with my teammates, the staff and the fans."

Pelicans: New Orleans announced on Jan. 5 that Williamson, the No. 1 pick in the 2019 draft, would be rehabbing away from the team while remaining under the supervision of New Orleans' medical staff. Green said the team remains in communication with Williamson, but that there's no timetable for his return. "He's just gotta get healthy and we'll see what happens," Green said. "We'll see where he is here shortly."

76ers: Seth Curry (ankle), Danny Green (hip) and Shake Milton (back) continued to be sidelined. Curry has missed two straight, Green six in a row and Milton the last 10. Matisse Thybulle returned to the lineup after a five-game absence with a right shoulder injury.

Pelicans: Hart missed a chance for a homecoming of sorts. He played collegiately at Villanova and was the leading scorer for the Wildcats' 2016 national championship team. The Wildcats retired his jersey during a halftime ceremony during their Jan. 19 game against Marquette. He is averaging career highs in points (13.5) and assists (4.2) along with 7.6 rebounds. ... New Orleans fell to 7-18 on the road.