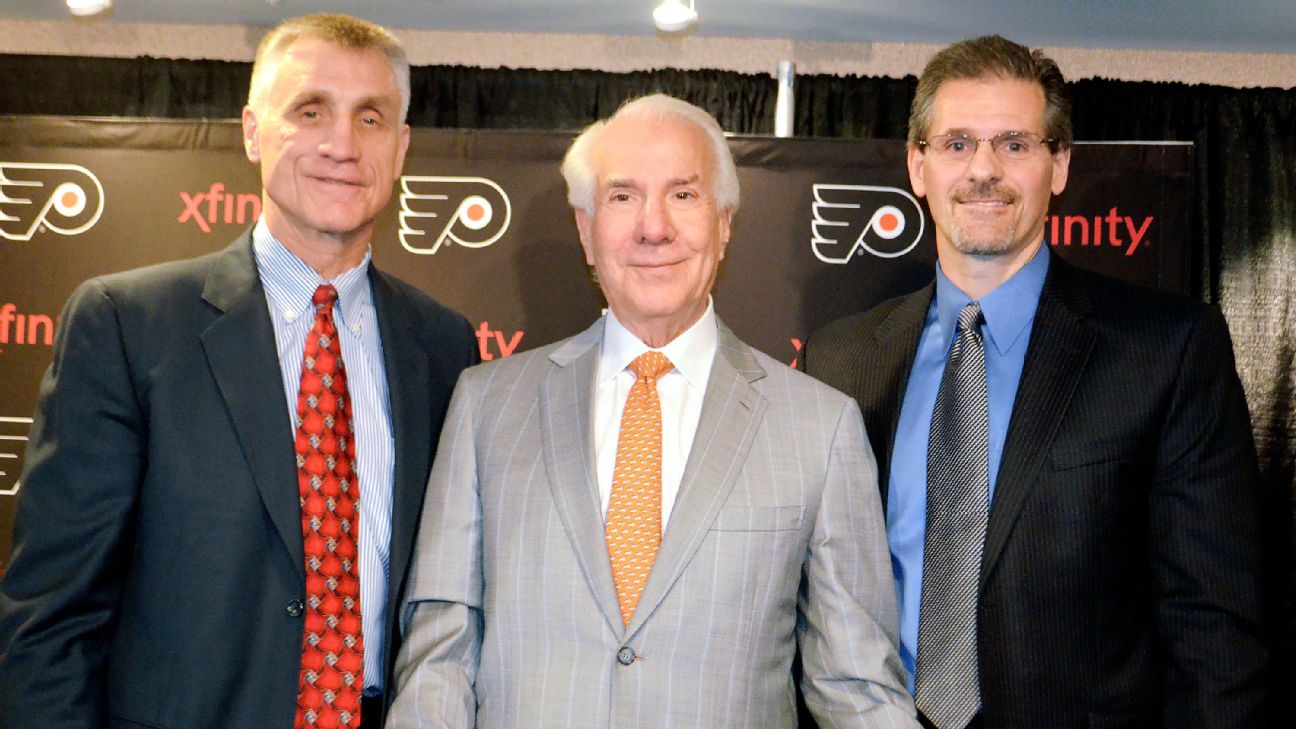 When the Philadelphia Flyers fired general manager Ron Hextall on Monday, they cited a philosophical impasse as the catalyst.

Hextall believed his plan was the correct one to lead the team to postseason success, as the Flyers sought their first Stanley Cup since 1975 and first playoff round victory since 2012. But ownership had a different timeline, and methodology, in mind.

"He was very confident in his plan and his vision, and he wasn't going to waver from that plan," said David Scott, chairman and chief executive officer of Comcast Spectacor, in a Tuesday news conference following Hextall's firing. "Do I think we can do better as a team now? Not two years or three years from now, but now? I think the answer is yes."

The comments from Scott and Flyers president Paul Holmgren would indicate that Hextall had earned their respect in some aspects of his job -- salary cap management, the assembly of prospects on the roster and in the minor leagues -- but that the team simply hadn't seen the results on the ice since he took over in May 2014.

"Hexy in his time as general manager, has put this organization in a good spot. That said, in the best interests of the organization, it was time for a new voice with a different mindset that could push the team to a new level," said Holmgren, whom Hextall replaced as general manager when he moved up to team president.

The Flyers have more than $7 million in available cap space and the ninth-best prospect pipeline in the NHL, according to ESPN's Chris Peters. Clearly, ownership felt it was time to leverage those assets to improve the Flyers now.

The Flyers are 10-11-2, with a minus-13 goal differential. They sit four points out of the final playoff seed in the Metro Division and five points out of the wild card. The team was hit with several injuries early in the season, including to goaltenders Brian Elliott and Michal Neuvirth.

Goaltending, ironically, was always the chief problem with the teams built by Hextall, a former star goalie for the Flyers as a player. The team has a Grade-A prospect in goalie Carter Hart in the AHL, and Holmgren said he and Hextall were on the same page about not rushing him to fix a team with the worst save percentage in the NHL this season (.880).

"Is there a time during this year when we can bring him up and take a look at him? Maybe. But to put him in 20 games into the season, I don't know if we're at that point yet," Holmgren said.

The decision to fire Hextall came after multiple weeks of discussions between Holmgren and Scott, with Holmgren ultimately making the call. What had become clear was that Hextall's vision for the team and its long-term success didn't align with the more urgent tone from ownership, which sense apathy in the fan base and heard season-ticket holders threatening non-renewals if the team's trajectory didn't change.

"The bottom line is that we want to make more progress," Scott said. "It's all about winning, whether it's a business or a hockey team. I personally feel our fans deserve better. I think we have great fans. They're patient. We'll invest everything we have to. This is about winning hockey games."

Usually, winning hockey games starts with the coach. When Hextall was fired on Monday, many Philadelphia beat writers had to clarify that it wasn't a typo: That it was in fact Ron Hextall that got the ax, and not coach Dave Hakstol, whom the GM hired in 2015.

There was speculation that Hextall's refusal to fire his coach led to his own dismissal, but Holmgren denied that. "Absolutely not. It was Ron's decision all along, and it was never discussed with me," he said. "My feeling right now is that under the circumstances, with the injuries, I think the coaching staff has done a decent job."

But he also said that Hakstol's fate will be in the hands of the team's next general manager, whom Scott said would be hired in "weeks, not months." The Flyers intend to look outside of the organization for Hextall's replacement. Dean Lombardi, who led the Los Angeles Kings to two Stanley Cups and was a senior adviser to Hextall, is not in the running for the job.

Whoever gets the gig, the message from ownership is clear: Winning can't wait any longer, no matter how much one believes in their own timeline.

"Ron, give him credit: He was unyielding in his approach. Are there things he could have done to make the team better today? I don't know. But he had his plan. He was sticking to it. You can slice and dice that any way you want," Holmgren said.

"He put us in a good position. But in order to put the team in a better position, moving forward, we had to do what we did."
Report a correction or typo
Related topics:
sportsespnron hextallnhlphiladelphia flyers
Copyright © 2020 ESPN Internet Ventures. All rights reserved.
More Videos
From CNN Newsource affiliates
TOP STORIES