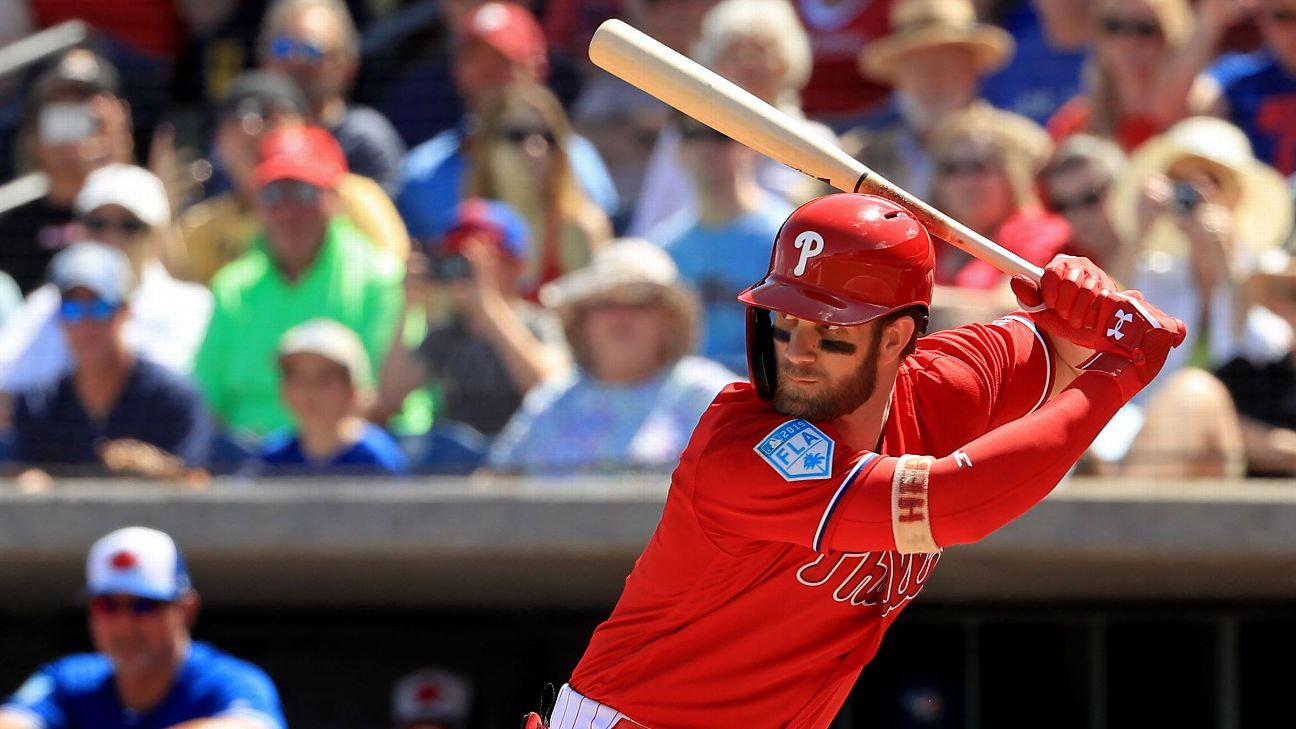 CLEARWATER, Fla. -- Bryce Harper hopes to change all those zeros soon. No, not the ones in his contract.

Back in the lineup two days after being hit by a pitch in the ankle, thePhilliesnewcomer with the $330,000,000 deal was hitless Sunday, leaving him with a batting average of .000 in spring training.

Harper is 0-for-8 in 14 plate appearances over five exhibition games.

His goal for the final week in Florida? "Definitely getting a couple knocks," Harper said.

"I don't want to leave spring without a hit, but if that happens, then March 28, here we come," Harper said.

Harper returned as the designated hitter against the split-squad New York Yankees and went 0-for-3 with a walk. The star outfielder will play in a minor league game Monday, take Tuesday off and return to a major league game on Wednesday.

On Friday, Harper was hit in the right ankle by a 96 mph fastball from Toronto rookie Trent Thornton and left the game. The decision to let Harper play Sunday came after a pregame workout that included running and hitting.

"Felt good," Harper said. "It was shocking I came in yesterday and not really any swelling, no bruising. Glad I was able to get out there and feel pretty normal."

Batting third, Harper took a called third strike on a 96 mph fastball from James Paxton in the first. Harper then grounded out to shortstop on another 96 mph offering from the left-hander.

"The timing, definitely a little behind right now," Harper said. "A little late on some of the pitches against Paxton today. It's going to be a process."

Harper, who agreed to a 13-year contract in late February -- almost two weeks after spring training began -- struck out swinging on a 90 mph pitch from Dellin Betances in the sixth.

In his final plate appearance in the ninth, Harper drew a walk from minor leaguer Anderson Severino on 99 mph fastball that was high and in.

"This is practice," Phillies manager Gabe Kapler said. "These are reps, they're work. He's seeing pitches, working some deeper counts. We feel like he's going to have his timing and his rhythm down for Opening Day and that's most important."