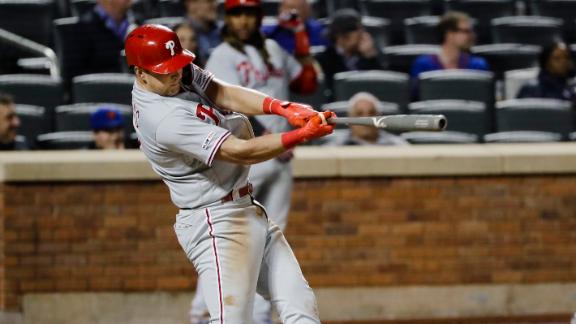 NEW YORK -- Rhys Hoskins homered off reliever Jacob Rhame and taunted him with a slow jog around the bases a night after Rhame buzzed him with two fastballs, and the Philadelphia Phillies beat the New York Mets 6-0 on Wednesday.

Hoskins was furious after Rhame sailed two pitches over his head with two outs in the ninth inning of New York's 9-0 win Tuesday. The slugger faced Rhame again in the ninth Wednesday, flipping his bat emphatically after hooking a two-run shot over the wall in left.

It took Hoskins 34.23 seconds to touch 'em all, the slowest trot in the majors this season. His previous slowest time around the bases this season was 23.82 seconds.

"He got me," Rhame said after the game when asked about the home run. "[If I] make a better pitch, he doesn't get to run the bases."

Added Mets manager Mickey Callaway: "I really don't have any thoughts on it. That's their team. They can do what they wanna do. I'm not really worried about what they do."

Hoskins has five career home runs at Citi Field, his most at any visiting ballpark and tied for the most by any visiting player since his debut in 2017.

"If a ball goes over your head the night before, the best way to get back at the pitcher is by putting the ball in the seats," Phillies manager Gabe Kapler said. "So I thought it was worthy of him having that moment and really taking it all in, soaking it all in. He deserved that."

Hoskins said the leisurely jog wasn't about retaliation, but he didn't mind giving a jolt to the struggling Phillies.

"A couple of guys kind of said the phrase, 'Don't poke the sleeping bear,'" he said. "Seemed to be the last couple innings was a pretty good indication that may have happened."

Bryce Harper doubled in a run but struck out three times, and Vince Velasquez pitched five innings for Philadelphia. The Phillies avoided a three-game sweep and won for the second time in seven games.

Velasquez (1-0) struck out six and allowed three hits, dropping his ERA to 1.99. Pat Neshek, Seranthony Dominguez, Adam Morgan and Juan Nicasio pitched an inning each to close up shop.

Jason Vargas (1-1) allowed Harper's RBI double in the first but was otherwise strong, dropping his ERA to 7.20. He allowed a run and three hits in 4 2/3 innings, walking off to applause after striking out Harper for the second time. Mets fans had been calling for the struggling left-hander to be bounced from the rotation.

Hoskins sparked a three-run eighth with his first career triple, and then made his statement against Rhame in the ninth.

"Baseball's a funny game like that," said Hoskins, when asked how much he enjoyed the home run in light of the previous night's events. "It seems to put you in situations that have happened before -- usually on the next night, and of course that's what happened. Good exclamation point for us at the end there, I think. Kinda needed that as a club, a win like that, going back home right before the long homestand."

Kapler said before the game he was "still fairly upset" over Rhame's high-and-tight pitches to Hoskins, which Philadelphia took as retaliation for two Mets who got plunked Monday night.

Kapler didn't sound eager to throw at the Mets, though.

"We do not retaliate, and we do not throw at anybody intentionally," he said before the game.

Velasquez did hit Todd Frazier in the upper arm with a fastball leading off the fourth, but Frazier was unfazed and took his base calmly. Plate umpire Brian Gorman issued warnings to both dugouts.

Kapler spoke with Gorman during the next inning break.

Harper's double in the first ended the Phillies' 14-inning scoreless streak. Vargas got out of the inning when right fielder Michael Conforto made a sliding catch and shortstop Amed Rosario picked a tough grounder.

Each of Harper's strikeouts came with runners on, and he went 1-for-9 with seven punchouts in the series. He let out a frustrated yell after nearly colliding with second baseman Cesar Hernandez while catching a popup in the sixth.

Philadelphia's only other run in the series was Hoskins' homer in a 5-1 loss Monday.