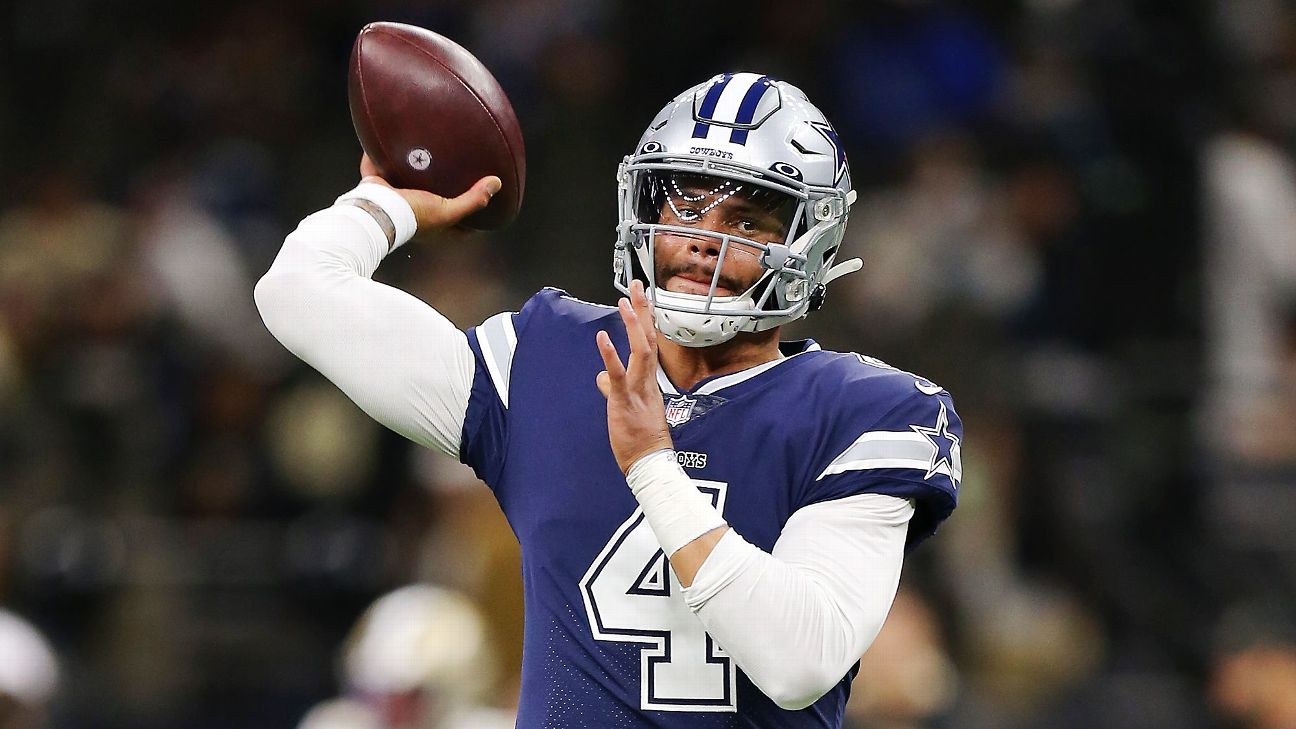 Your Thursday night NFL playoff picture update for Week 13, following the Cowboys-Saints game, goes a little like this:

This weekend's games won't really change the current trajectory of either team. When Week 13 is completed, the Cowboys will still be in a commanding spot in their division, and the Saints will be looking up at too many teams in the NFC wild-card race. What follows is a look at where the NFL stands with six weeks remaining until the playoffs begin. As always, we lay out the possibilities and likelihoods. Our next update will post after Sunday night's game between the Broncos and Chiefs, and then again after an important Patriots-Bills game on Monday night.

The quarterback of the AFC's top seed threw four interceptions Sunday night -- and his team still won. You can view that as a sign of strength for Lamar Jackson's Ravens. Their presence at the top of the rankings reflects a conference that is truly up for grabs among a half-dozen teams. Can the Ravens truly hold off the Patriots, Titans, Chiefs and Bills? We don't often say this, given the competitiveness of the rivalry, but the Ravens have a strong chance of advancing their quest when they play the reeling Steelers on Sunday.

The Patriots keep giving us reasons to think they're one of the best teams in the NFL. They've won six in a row and by at least 18 points in five of those. And overall, they lead the NFL with a point differential of plus-144. It's additionally wild that this has all come with rookie quarterback Mac Jones, who is playing well but isn't among the league's top 10 in Total QBR. Amazingly, at least to some, the Patriots can begin the process of locking down the AFC East in Week 13 when they travel to Buffalo. FPI doesn't like their chances of winning the division, much less earning home-field advantage, but they're all legitimate possibilities for the Patriots.

The good news for the Titans is that a two-game losing streak hasn't really damaged their standing in the AFC South, where they have a two-game lead with five games left to play. They'll have a bye in Week 13 and then return to play the Jaguars and Steelers, two teams who are going in the wrong direction. The question with the Titans is not whether they'll make the playoffs, but rather -- given their health and the results of their past two games -- whether they can be considered likely to make a deep run. At the moment, the answer is very much in doubt.

The Chiefs will return from their bye week with their playoff positioning unchanged. But they now have a full game lead in the AFC West, where the other three teams are all 6-5. With that said, the division remains very much in play. Four of the Chiefs' final six games will be against AFC West foes, including two against the Broncos and one each against the Raiders and Chargers.

The Bengals look like a different team than the one that lost consecutive games heading into its Week 10 bye. Since then, they've defeated the Raiders and Steelers by a combined 57 points. They've gotten themselves to the point where FPI likes their chances of at least making the playoffs, and they have a roughly one-in-four chance of winning the AFC North.

The Bills better hope they've figured things out, because they're about to head into a brutal stretch of their schedule. They will play the red-hot Patriots twice in four weeks, with a game at the Buccaneers mixed in there, as well.

The Week 12 loss to the Broncos was the Chargers' fourth defeat in their past six games. They've clearly turned in the wrong direction after a 4-1 start, but for now, they're still among the AFC's top seven thanks to their head-to-head victory over the Raiders in Week 4. As to whether they can stay here is another story. All told, the Chargers haven't been playing consistent playoff-level football since mid-October. They're teetering on the edge.

In the AFC hunt

We can do nothing but tip our cap to the Raiders, whose post-Jon Gruden slide seemed well underway during a three-game losing streak entering Thanksgiving's game at the Cowboys. But they went into AT&T Stadium and won a war of attrition and now have a winnable home game against Washington.

The Broncos came out of their bye with a dominant performance against the Chargers, their third win in their past four games. It drew them even with the rest of AFC West and set them up to at least have a chance down the stretch. Four of the Broncos' remaining six games are against divisional rivals, starting Sunday at the Chiefs.

The Colts' three-game winning streak ended with an odd home loss that featured 27 consecutive pass plays from their offense, presumably in part to beat a Buccaneers defense that was geared to stop tailback Jonathan Taylor. We found out, to no surprise, that quarterback Carson Wentz can't carry this team. They'll have a chance to get back on track, however, against the Texans.

Yeesh. The Steelers don't look like anything close to a playoff team. The path won't get any easier Sunday against the Ravens.

The Browns head into their bye with losses in two of their past three games, and they will face the Ravens when they return in Week 14.

The Cardinals presumably return quarterback Kyler Murray and receiver DeAndre Hopkins back in the lineup. They'll need to be at full strength. Their strength of their remaining schedule ranks No. 18 in the NFL, based on FPI, but the eyeball test suggests it's more difficult than that. Three of the five games are on the road, and two are against teams that currently have winning records (Rams and Cowboys). Plus, their Week 16 opponent (Colts) will be a tough out, as well. Fortunately for the Cardinals, they have the league's best record on the road (6-0) through Week 12.

The Buccaneers have now won consecutive games, scoring 68 points in the process, since a two-game losing streak had everyone around the NFL panicking. It's hard to argue that the Buccaneers aren't back on track. Their remaining strength of schedule ranks No. 22, and at the moment, it includes only one opponent with a winning record (Bills, Week 14).

It wasn't pretty, but the Cowboys snapped a two-game losing streak on Thursday night in New Orleans and took another step toward locking down the NFC East title. Even if the Eagles, the Giants and Washington all win this weekend, FPI would still put the Cowboys' chances to win the division at 92.4%. There will be a lot of takes about the way the Cowboys played, including a botched two-minute drill at the end of the first half to a failure to close the game out when taking over possession midway through the fourth quarter. But we should probably refrain from judging anything but the final result, given the absence of five coaches -- including head coach Mike McCarthy -- and two players because of COVID-19 protocols.

At this point, it's fair to ask if the Rams are going to make the playoffs at all. They have now lost three games in a row, with quarterback Matthew Stafford throwing a pick-six in each of them, and appear in significant disarray. The Rams will get the best chance they could to regroup on Sunday, with a home game against Jacksonville, but overall, their remaining schedule is the fourth-most difficult in the league.

The 49ers are figuring things out at just the right time. They have won three consecutive games and four of their past five, and Week 12's victory over the Vikings will supply them with an important head-to-head tiebreaker should it be needed at the end of the regular season. The strength of their remaining schedule ranks No. 24, and an argument could be made that they're playing better right now than all but one of their final six opponents (Bengals in Week 14). At this rate, they'll overtake the Rams in the NFC West and the playoff standings in a matter of weeks.

Yep, you read that correctly. Washington's victory Monday night over the Seahawks allowed it to supplant the Vikings for the final wild-card spot, thanks to the best conference record (5-2) of the NFC's three 5-6 teams. The win was Washington's third in a row, and its remaining schedule is pretty interesting. After playing the Raiders on Sunday, it will finish the season on a five-game run against NFC East opponents: two games against the Cowboys, two versus the Eagles and one with the Giants.

Next up: at Raiders

In the NFC hunt

The Vikings are fortunate to be facing the Lions on Sunday, a game they're playing without tailback Dalvin Cook.

The Falcons started 1-3 and then went on another 1-3 bender before holding on for a seven-point victory in Week 12 over the Jaguars. As improbable as it might seem, the Falcons are barely out of the sloppy NFC wild-card situation, thanks to a head-to-head tiebreaker with the Saints. Stranger things have happened, but they have a pretty significant obstacle on Sunday when they host the Buccaneers.

There's no way to sugarcoat it. The Eagles flunked a pretty basic test of playoff worthiness in Week 12, scoring just seven points in a loss to the equally anemic Giants. It's fair to ask if they'll squander one of the NFL's easiest remaining schedules, which continues on Sunday at the Jets.

The Panthers have now lost seven of nine games since a 3-0 start. Their fade from the playoff picture is nearly complete, but they'll have a bye week followed by a winnable game in Week 14 against the Falcons to delay the inevitable for a little longer.

New Orleans Saints (5-7)
Thursday night was a high-leverage game for the Saints, who would have moved into the No. 7 spot and raised their chances for a playoff spot to 54.2%, according to FPI. Instead, they lost a winnable game, and FPI now puts their playoff chances at 20% heading into a Week 14 game at the Jets. 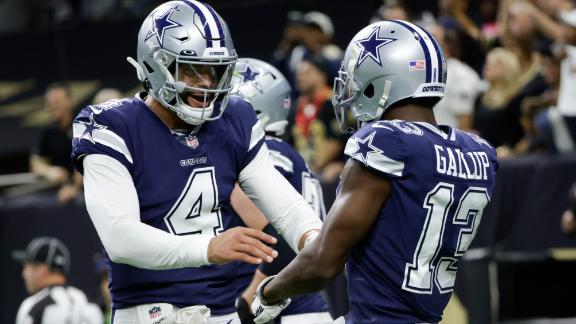 Dak connects with Gallup on the fade route for TD
Dak Prescott lobs it up to Michael Gallup who makes the leaping grab for a Cowboys touchdown. 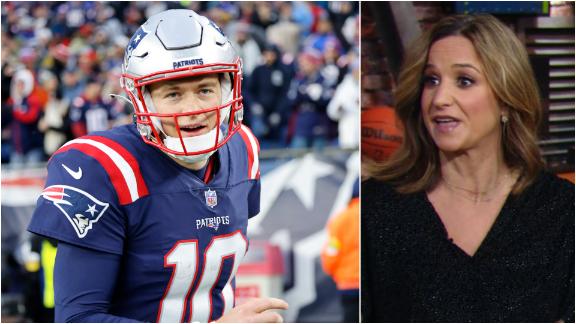 Why Dianna Russini is calling Patriots-Bills the game of the year
Dianna Russini and Bart Scott preview the AFC East showdown between the Patriots and Bills on Monday Night Football. 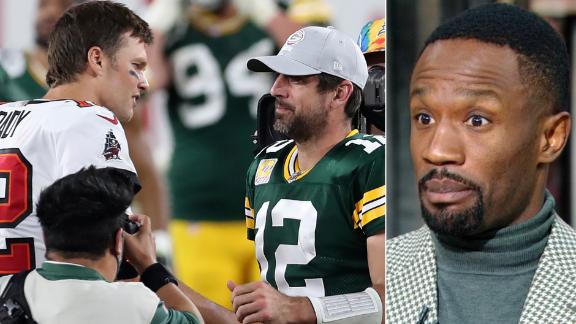