NHL Power Rankings: 1-31 poll, plus every team's X factor in the final month 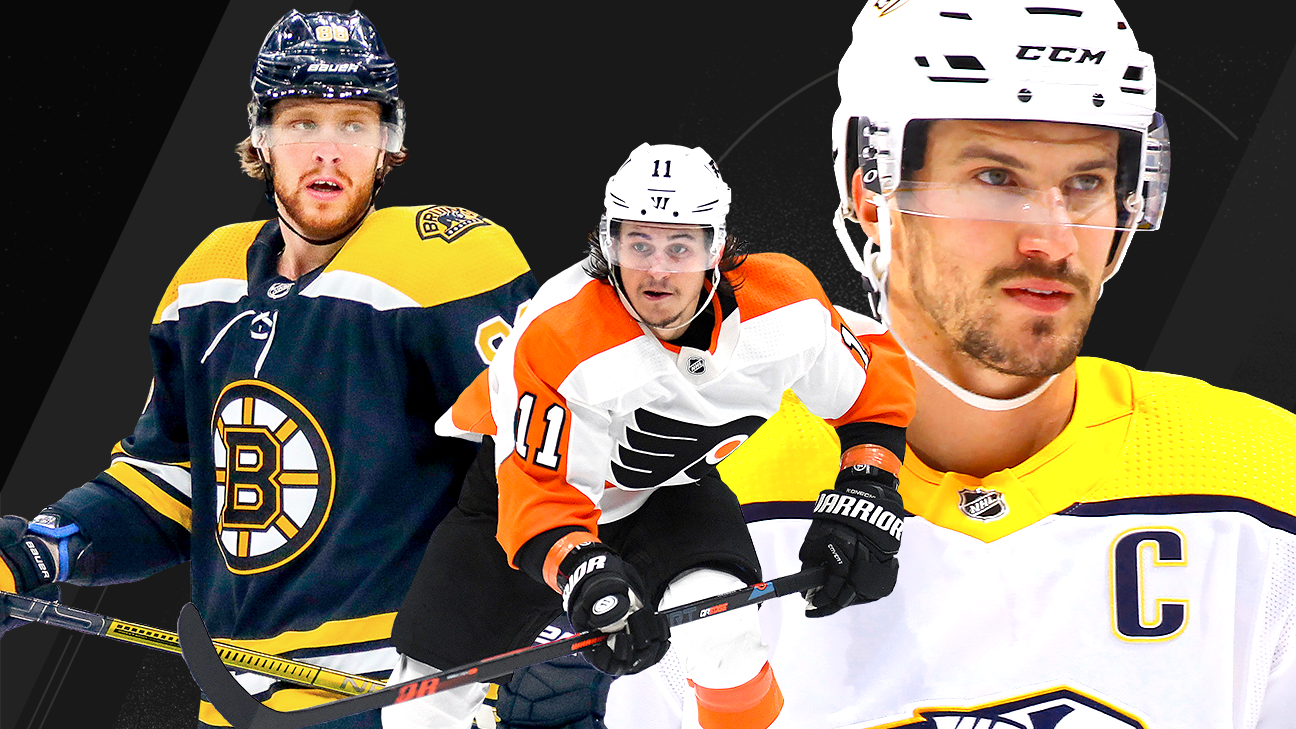 It's hard to believe, but we're staring down the final month of the 2019-20 NHL regular season. For this week's ESPN Power Rankings, we identified the X factor for each team down the stretch.

How we rank: The ESPN hockey editorial staff submits selections ranking teams 1-31, and those results are tabulated to the list featured here. Teams are rated through Tuesday night's games, taking into account overall record, recent success and other factors such as injuries.

Note: Standings point pace is based on games through March 4. Many stats are courtesy of Hockey Reference.

Jake DeBrusk (in a contract year) has been a streaky scorer in his three seasons with the Bruins. His goal total is down a bit this season, but he still has a chance to get hot, which would add an extra dimension to Boston's middle six.

No question, Vladimir Tarasenko's return is the biggest X factor for the Blues. The fact that St. Louis was quiet at the trade deadline signals it expects its sniper back sooner rather than later.

A huge part of the Avalanche game plan is their ability to stay disciplined. They lead the league with a plus-34 in net penalties. But they need to be better on the power play; they're a bottom-third team, converting at only 18.2%.

GM Julien BriseBois traded for Barclay Goodrow because he believed he's an underrated player. Many balked at the price (a first-round pick) for a 27-year-old whose career high is 25 points. Here's to Goodrow being the X factor down the stretch for Tampa.

The Caps acquired Brenden Dillon ahead of the trade deadline for depth, in part because Michal Kempny has been struggling. If Kempny finds his game again, Washington will be even more dangerous heading into April.

The Flyers have been without Nolan Patrick all season, as the 21-year-old manages a migraine disorder. If he returns at any point this season, it will give Philly the No. 3 center it has long coveted.

Denis Gurianov leads the Stars with 20 goals this season, but his usage has been puzzling (he averages less than 13 minutes per game). Could an expanded role lead to even more production?

Over the past month, the Golden Knights have the second-worst penalty kill in the league (67.6%) and it has been just as bad at home as on the road. They'll need to clean that up before the playoffs.

There are a few factors behind the Penguins' recent six-game slide. But maybe it's no coincidence that once Pittsburgh got blueliners John Marino and Brian Dumoulin back, they were able to snap it.

We know Leon Draisaitl and Connor McDavid have been producing at wicked rates this season, but the rest of the Oilers have struggled to keep pace. The Oilers are hoping speedy trade deadline acquisition Andreas Athanasiou can be that guy.

The Isles' "Identity Line" of Casey Cizikas, Cal Clutterbuck and Matt Martin have played in fewer than 20 games together so far. Get them back together down the stretch -- Cizikas remains out -- and the Isles are in better shape.

Ice-time leader Morgan Rielly hasn't played since Jan. 12 because of a broken foot. Reilly's projected return next week could be the perfect boost for this defensively challenged team (during Reilly's absence, only the Red Wings have given up more goals per game than the Leafs).

How the Canes fare in back-to-backs could seal their playoff fate. Of Carolina's remaining 18 games, eight are back-to-back sets. The Canes have gone 6-3-2 in games with zero days' rest so far this season.

Vancouver fans are anxious to know how serious Jacob Markstrom's injury is, and whether he can return this season. The Canucks have looked flustered since he has been out, and their once-stable playoff hopes are now in jeopardy.

After Sean Monahan and Johnny Gaudreaueachscored more than a point per game in 2018-19, their production has regressed this season. Both are still dangerous offensively and can be game-breakers.

Chris Kreider was playing some of the best hockey of his career when suffered a fractured ankle. Finding a competent left wing replacement forMika Zibanejad's line is crucial for a team on the playoff bubble.

I asked GM Jarmo Kekalainenthis week what he believed the X factor for his team would be: "We've got to keep believing. That's the only way we're going to get any success, that's the only reason we've succeeded so far."

Goalie Connor Hellebuyck has helped the Jets -- and their pedestrian blue-line group -- stay afloat this season. Hellebuyck has the second-most starts in the league, trailing only Carey Price, and you can bet the Jets will use him a ton in their wild-card push.

There are few players hotter in the NHL right now than Kevin Fiala. The Wild are within reach of a playoff spot, and if they keep getting goals from the once-prized Predators prospect, Minnesota might just have a shot.

It hasn't been pretty for the Panthers lately. If they have any shot at the playoffs, they need to play better at home. Since the All-Star break, Florida has lost seven straight home games. They have eight games in Sunrise remaining.

When Ryan Ellis was injured during the Winter Classic, he was playing like a Norris Trophy candidate. Ellis missed 20 games, but his return has been seamless, and it could help separate the Preds from the rest of the pack in the wild-card race.

Fans have put a lot of pressure on splashy acquisitions Taylor Hall and Phil Kessel to preform, but the X factor on offense might be homegrown Clayton Keller, who has been amping up his production of late.

Since it's looking like a lost season, we'll be monitoring a move for the future. Will the Habs sign Cole Caulfield after his freshman season in Wisconsin, or convince him another year in college will be better for his development?

Dylan Strome will be due a big extension this summer. It's going to be expensive, but how he finishes the season might determine just how pricey. It has been a frustrating campaign at times for Strome, though his strong play last season proved he can be a centerpiece for this retooling team moving forward.

The Sabres went 2-12-2 in March last season, which resulted in the firing of coach Phil Housley. Similar results could also provoke change, but this time we're looking at GMJason Botterill.

We'll be keeping an eye on 23-year-old Mackenzie Blackwood for the next month. The restricted free-agent-to-be has been making the case lately that he's New Jersey's goaltender of the future.

Over the final month of the season, the Ducks have a keen interest in 35-year-old David Backes. There wasn't a role for Backes anymore in Boston, but Anaheim is hoping he can still contribute in the NHL.

All of a sudden, the Sharks are showing signs of life with a nice three-game winning streak. Can Martin Jones (.950 save percentage over his past three) build momentum to bring into next season?

Marcus Hogberg was the Senators' de facto No. 1 goaltender, but he is back in Sweden for personal reasons. Ottawa will now turn to 38-year-old Craig Anderson -- probably in his swan song -- to finish out the season.

A team squarely in the Alexis Lafreniere sweepstakes will spend the final month seeing what they have in 25-year-old goaltender Cal Petersen, whose path to being a full-time NHLer was cleared by the Jack Campbell trade.

The Red Wings were the first team to be mathematically eliminated from playoff contention before the trade deadline since the 2003-04 Penguins. Now we'll see whether Detroit can pull off a full-on tank, like those Pens did (which landed them Evgeni Malkin No. 2 overall). 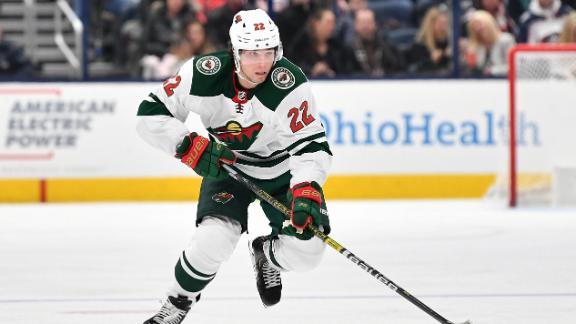