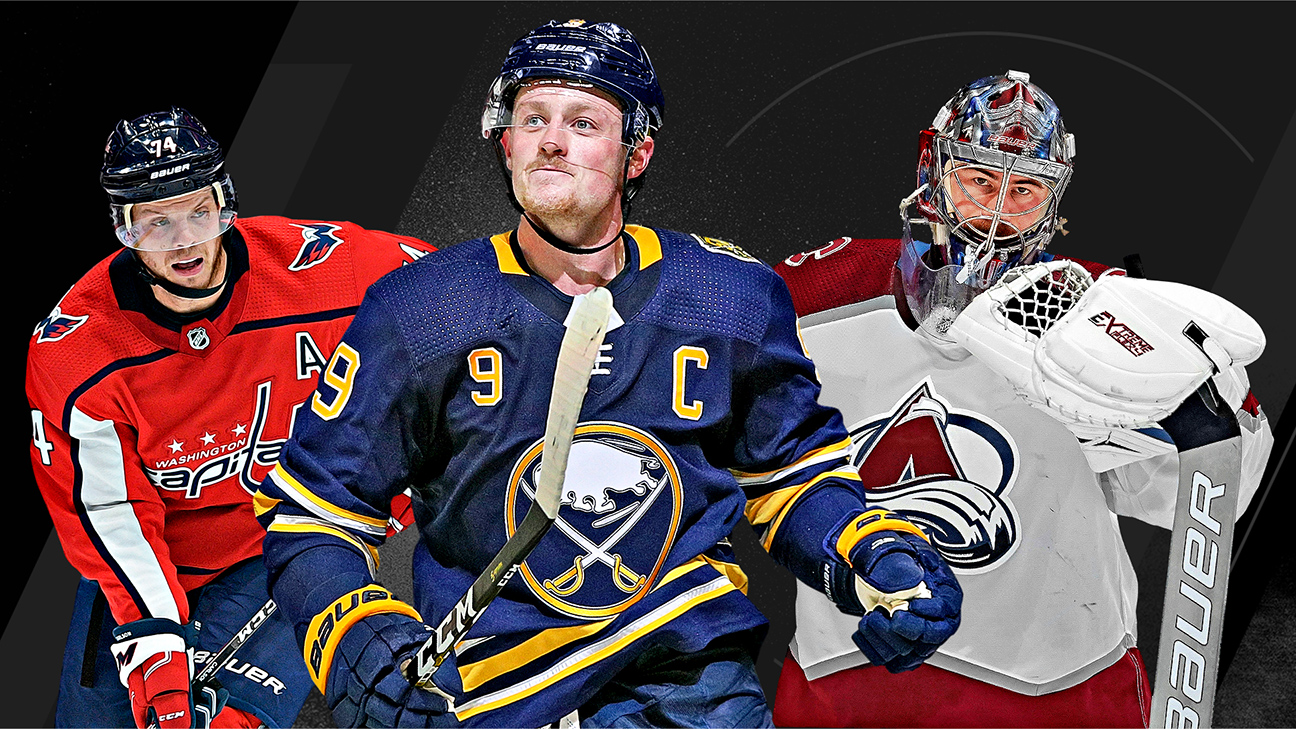 New year, new decade, new you. The same can apply to NHL teams, as you'll see in this week's ESPN Power Rankings. As the calendar flips to 2020, we assigned some classic New Year's resolutions to every team -- because no matter where you are in life, you always have a chance for self-improvement.

How we rank: The ESPN hockey editorial staff submits selections ranking teams 1-31, and those results are tabulated to the list featured here. Teams are rated through Tuesday night's games, taking into account overall record, recent success and other factors such as injuries. The previous ranking for each team is its spot in our final edition of 2019.

Be good to old friends. Nicklas Backstrom is up for a new contract (and negotiating for himself). Meanwhile, longtime goaltender Braden Holtby needs a new deal, and the team has the chance to move on to a younger option in 22-year-old Ilya Samsonov. Whatever happens, the Caps should treat their veteran players with respect -- even if they're on the way out -- for positive vibes in 2020.

Don't be complacent with success. Hey, there's no reason not to believe in the Blues, considering how well they've performed post-Stanley Cup, especially with the injuries they've been through. The goal now is to maintain that mindset.

Stick to your budget. The Bruins have been banged up all season, dealing with various injuries to key players. That makes it tempting to pony up on a big trade-deadline acquisition to supplement this group. But when healthy, the Bruins are one of the most dangerous Stanley Cup contenders. They should exercise patience and keep the checkbook away. Save it for when you need to extend Torey Krug.

Know that it's OK to ask for help. The Islanders have looked terrific this season, not missing a beat from 2018-19 and gutting it out through a recent rough patch to finish the calendar year strong. But sometimes, it's OK to admit that you need some help. The Islanders would be better off with reinforcements, such as a third-line center.

Good health. It's becoming almost as comical as the Flyers' rotating cast of goaltenders last season. Every time a Penguin becomes healthy, a new one goes down. Now it's Jake Guentzel (previously on career scoring paces) who is out four to six months after shoulder surgery. Somehow the team keeps picking up wins, but here's to a healthier 2020.

Act like you've been there before. Nathan MacKinnon said that in his seven seasons with the Avs, this is the first time that he thinks his team has a chance at the Cup. The rest of the league views Colorado as a contender, too, which means the Avs face some big expectations externally as well. They must continue to play with swagger.

Learn from your elders. The Canes have looked pretty dynamic thus far, despite lingering questions such as a rotating sixth defenseman spot and Erik Haula's health. The inevitable midseason return of 38-year-old Justin Williams, the former captain, could be the missing piece that makes this team into a true contender. Just listen to Willy.

Ride the Battle Wagon to the rink more often. I mean, look how much fun Alex Tuch and William Karlsson are having here. The Golden Knights are back on top of the Pacific Division and are playing excellent hockey. They can afford to do more stuff like this.

Rid yourself of the bad juju. The Leafs are in a better position now with Sheldon Keefe in charge: They're tied for first in points percentage since Keefe took over on Nov. 21 and are the only team to average more than four goals per game in that span. Keep enjoying the highs, and don't look back -- even if you end up drawing the Bruins in the playoffs yet again.

Seek stability. It's hard to form an identity when you regularly have a new voice telling you what to do. The Stars are cycling through too many coaches lately, which has prevented them from sustained success.

Stay disciplined in your regimen. This definitely applies to the defense, which has been restructured and looks totally improved under assistant coach Mike Yeo. Additions such asMatt Niskanen have helped, too. The Flyers are top-10 in the league in goals allowed after finishing the previous season ranked 29th. Stick to the plan -- it's working.

Find balance in your life. The Coyotes have thrived this season because of their goaltending. Darcy Kuemper, in particular, has been outstanding. But that needs to be complemented by decent offense for this team to get anywhere. It would be nice if Taylor Hall or Phil Kessel would go on a second-half tear.

Mend relationships with old friends. How the Jets have been able to stay relevant in the playoff race with this hodge-podge defensive group is quite remarkable. Still, the team would gladly welcome back Dustin Byfuglien at any point. Hopefully the two sides can air grievances, talk it out and make up for a 2020 reunion.

Lend a helping hand to a friend in need. One of the biggest reasons the Canucks are in playoff position right now is their spectacular goaltending from Jacob Markstrom. He's facing way too many high-danger chances, though. The defense could clean things up in front of him.

Stop questioning the plan. Questions about Jon Cooper's job security are getting old. GM Julien BriseBois held court last week to quash rumors, but the Lightning need to stop comparing their season to 2018-19, embrace the process and ride out whatever 2020 path the hockey gods call for with this group.

Practice self-love. For years, Aleksander Barkov was the most underrated player in the league, but now that might be his teammate, Jonathan Huberdeau, who is on pace for 111 points (!) this season. Panthers fans should do themselves a favor and be kind and appreciate what they have in front of them. Because it is special.

Practice self-care, and don't be afraid to take some rest. Goaltender David Rittich has been a beast for the Flames in his first full season as a starter. He's trailing only Frederik Andersen in minutes played this season. Rittich, however, has a history of trailing off in the second half of the season, so Calgary should be generous in giving him a few nights off here and there.

Indulge a little. Ken Holland came in as GM and promised Connor McDavidthat he would right the ship by retooling through the draft. Holland should stick to his word, but he should also recognize how frustrated McDavid and Leon Draisaitl can get carrying the load. It wouldn't be the worst thing in the world to trade one or two draft picks for some scoring help.

Be prudent with your wealth. The Canadiens are positioned well for the future. They have some super-talented prospects, such as goal-scoring machine Cole Caufield, and 19 draft picks over the next two years. The Habs are hovering around the wild-card race but probably aren't true contenders in 2020. Don't give away those picks on a player who makes the team only marginally better now. It's not worth it.

Find consistency. The end of 2019 featured so many ups and downs for this talented, veteran team. The goaltenders and star players seem to take too many nights off. Now the Predators are playing catch-up in the standings. It's time for them to find a 2020 groove.

Practice positive thinking. Sometimes it can seem like it's Columbus versus the world. Just last week, the Blue Jackets were victims of a clock snafu (which made John Tortorella irate) and lost Joonas Korpisalo for four to six weeks(which is a shame because he has been a delight in net). Bigger picture, things could be a lot worse for the Blue Jackets post-all-in-2019. Just remember that.

Decide whom you want to keep in your core crew. For New York, 2020 is about paring down the social circle to those who make sense and add value. The Rangers really need to make a decision on Chris Kreider: extend the versatile forward or trade him to any of the several contenders thirsty for his services.

Do everything you can to lift up your tough-luck friend. It's time to get Jack Eichel into the playoffs. The captain has been playing out of this world this season (on pace for 50 goals, 108 points), but he deserves better talent around him. Unload one of those extra defensemen already, and get him some scoring help.

Embrace being a homebody. The Wild have had a topsy-turvy season but are still on the playoff bubble. They have a chance to start 2020 strong, with 14 of their next 17 games played in St. Paul. Xcel Energy Center wasn't exactly home-ice advantage for the Wild last season -- they finished 2018-19 at a16-18-7 clip at home and 21-18-2 on the road -- but they have played better at home this season, going 10-4-3.

Keep kids around so you can stay hip. We're all focusing on the veterans not available for the Blackhawks right now (led by Brent Seabrook). But reframe this season as the one in whichKirby Dach, Adam Boqvist and a handful of other youngsters got true NHL exposure, allowing this team to evolve with NHL trends.

Don't dwell on bad mistakes. Ilya Kovalchuk and the Los Angeles Kings are the friends you knew shouldn't have gotten married. You didn't say anything at the time, and they did it anyway. Less than two years later, they predictably got a divorce, and it's expensive. You have to be there to support your friend, but remind them to look forward. There's nothing you can do now to erase it.

Don't be so hard on yourself. Yeah, 2019 ended up being pretty crappy. You're not matching expectations, you feel a lot of pressure from your bosses, and you're not where you want to be. Negative energy is not what the Sharks need right now. Maybe 2020 is a perfect time for a mental reset.

Build a support group. Shrinking attendance is a growing problem in Ottawa (11,652 fans per home game, which would be the league's lowest season average since Florida in 2014-15). Sure, there is distaste with ownership, but D.J. Smith's group has proved to be a hard-working bunch outperforming expectations, and it deserves better.

Look for silver linings. OK, it's probably another lost season for the Ducks, who need to retool. But there are some things to be hopeful about. For instance, check out this sick assist from Ducks prospect Trevor Zegras in the World Junior Championships. The Team USA star will be on the Ducks' roster soon.

Look inward. The Devils need to look in the mirror, figure out exactly who they are and act accordingly. That might include some brutally harsh assessments such as: We're in another rebuild.