NHL Power Rankings: 1-31 poll, plus unsung heroes on every team 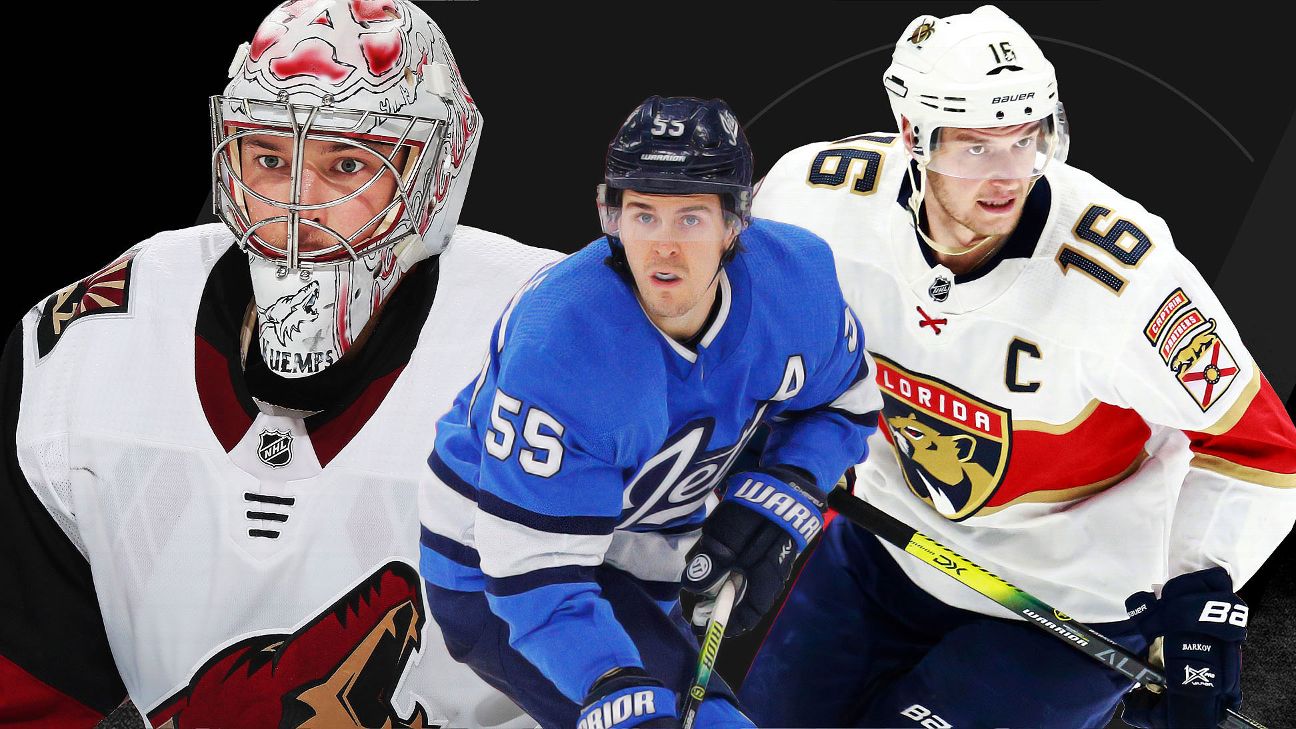 Not all heroes wear capes -- and most heroes barely get the recognition they deserve. There are plenty of stars shining in this league who don't get the proper spotlight.

For this week's ESPN NHL Power Rankings -- voted on, as always, by our panel of experts -- we identified an unsung hero on every team.

When we talk about the Islanders, we often credit their success to Barry Trotz's stingy defensive system. The coach deserves praise, but so do his two top blueliners,Adam Pelech and Ryan Pulock (both just 25), who began this season right where they left off last: serving as the perfect pieces for Trotz.

Jakub Vrana has taken a strong step forward this season. The 23-year-old has 10 even-strength goals, trailing only Brad Marchand and Leon Draisaitl for the league lead. Vrana is on pace to smash his career high for goals (24) and points (47).

How about some love for Jaroslav Halak? Tuukka Rask has been excellent this season, in large part because of his managed workload. Halak has started eight games, going 4-1-3 with a .924 save percentage.

Robert Thomas' statistics aren't there yet (three goals, two assists in 17 games) and the Blues' offense has been stagnant lately, but the 20-year-old is playing well. He leads the Blues in expected goals for percentage at even strength.

Both of the Avalanche goaltenders are back from injuries, which is welcome news. ThoughPhilipp Grubauer is the unquestioned No. 1, Pavel Francouz has been a solid backup, going 4-2 with a .915 save percentage and 2.82 goals-against average.

Defense was a concern for the Oilers this season, and Edmonton was hoping prospect Ethan Bear would be NHL-ready. Bear has over-delivered, taking on a big workload (21-plus minutes per game).

Conor Garland is the most surprising player on the team this season, in a good way. Raise your hand if you would have guessed the unheralded Garland (once deemed too small for the NHL at 5-foot-8) would be leading the Coyotes in goals with 10.

When we talk about Panthers forwards, it's often do-it-all No. 1 centerman Aleksander Barkov. But Barkov's linemate, Jonathan Huberdeau, is on pace for a career year, with 28 points in his first 21 games.

Perhaps a little under the radar,Martin Necas is putting together a solid rookie campaign. As the Canes have battled through injuries to key forwards, the 21-year-old Necas has consistently produced. He has 15 points in 21 games.

The Habs just got hit by the injury bug, and they'll be without Jonathan Drouin and Paul Byron for some time. Tomas Tatar (20 points in 22 games) earned his spot back on the top line because of his offense, and should stay, as long as he's defensively responsible and limits silly penalties.

As Patrik Laine has evolved into a more complete (pass-first) forward, his good buddy Nikolaj Ehlers is lapping him in the goal-scoring department. Ehlers leads the Jets with 10 goals through 22 games (Laine has five, but an impressive 14 assists).

Plenty of Penguins have stepped up in the face of Pittsburgh's long list of injuries, but Jared McCannhas perhaps been the most impressive. Since arriving last February, McCann ranks third on the Pens in points. Only Sidney Crosby and Jake Guentzel have scored more.

Elias Pettersson and Brock Boeser look fantastic, but so does J.T. Miller. Miller brings out the best in both young players, and has chipped in 20 points (including eight goals) to boot. When those three are on the ice, they dominate the shot attempt share.

The Flyers' young defensemen are often in the spotlight (for reasons both good and bad) but veteran newcomer Matt Niskanen has been steady on the top pairing, and has helped Ivan Provorov get back on track.

Despite tying for the team lead in goals (10), it still feels as ifReilly Smith isn't getting the credit he deserves. He's one of three Knights players with 20-plus takeaways, and has coughed up the puck only nine times.

Tomas Hertl and Evander Kane have been San Jose's best forwards, but Barclay Goodrow has been underrated while playing a big role. Barclay is the most-used Sharks forward on the penalty kill, and is on pace to more than double his career highs of seven goals and 17 points.

After the Rangers bought out Kevin Shattenkirk this summer, the Lightning took a flier on the defenseman. It has paid off big time. Shattenkirk is fourth on the team in scoring while manning the top pairing with Victor Hedman.

As a unit, the Blackhawks' blueliners absorb a lot of criticism, which means Duncan Keith usually doesn't get much praise. But there's nobody Chicago trusts more to gobble up minutes than Keith, who is looking solid in his age-36 season.

Calgary hasn't been able to build off last season's success, leading to frustration. One player who has matched the high bar set last season: Elias Lindholm. He's important on the penalty kill, mans the first power play, and should set a career high in goals for the second straight season after 27 in 2018-19.

Captain Roman Josi leads the team with 20 points. More underrated but just as impressive (especially with offensive production) is Ryan Ellis. He has been on the ice for 28 goals at even strength, trailing only Leon Draisaitl for most in the league.

It's often the Jack Eichel show in Buffalo. This season, Eichel's top sidekick isn't Jeff Skinner, but rather Sam Reinhart, who has recorded a point in all but nine games this season.

While the offense isn't producing fireworks quite as we imagined, one player who is sparkling is rookie Ilya Mikheyev. He's relevant in the Calder Trophy conversation, with 12 points in 23 games.

While John Gibson (once again) stole the headlines early, it actually has been 39-year-old backupRyan Miller who has been the Ducks' more reliable goaltender lately. Miller has yet to suffer a regulation loss.

Since his disastrous NHL debut in Pittsburgh, Elvis Merzlikins has been quite good (four starts, nine goals allowed, .919 save percentage). He's the unsung hero because he's giving the Blue Jackets a sliver of hope.

It has been mostly about the kids in New York, but 26-year-old Ryan Strome is quietly having a very good season (on pace for his best as a pro) as he stepped up nicely for No. 1 centerMika Zibanejad, who has now been out for nearly a month.

The Senators are exceeding our (very low) expectations. The penalty kill and Jean-Gabriel Pageau have both been terrific, but don't overlook Anders Nilsson. With Craig Anderson's contract expiring this summer, Nilsson is proving he could be the No. 1 goaltender moving forward.

We're not saying Robby Fabbri saved the Red Wings' season but since his arrival, Detroit has looked like a better team, going 3-1-2. Fabbri adds some talent to the second line while averaging more than a point per game as a Red Wing.

The Devils traded for P.K. Subban because they felt they needed a true No. 1 defenseman. It hasn't worked out as well as planned, and neither has the season in general. The best blueliner for the Devils has actually been Sami Vatanen, with eight points thus far while skating 21:37 per game.

There's not much going right for the Wild. One guy who is having a decent season is defenseman Brad Hunt. He's one of the few Minnesota players on the ice for more 5-on-5 goals for (15) than against (11).

The unsung hero is whoever decided to take down that Taylor Swift banner. At least it gave us a brief silly distraction from this bummer of a season. 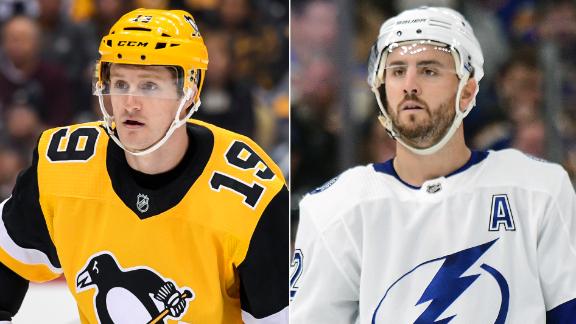